Fifty-two months of hell, from WWI outbreak to Armistice 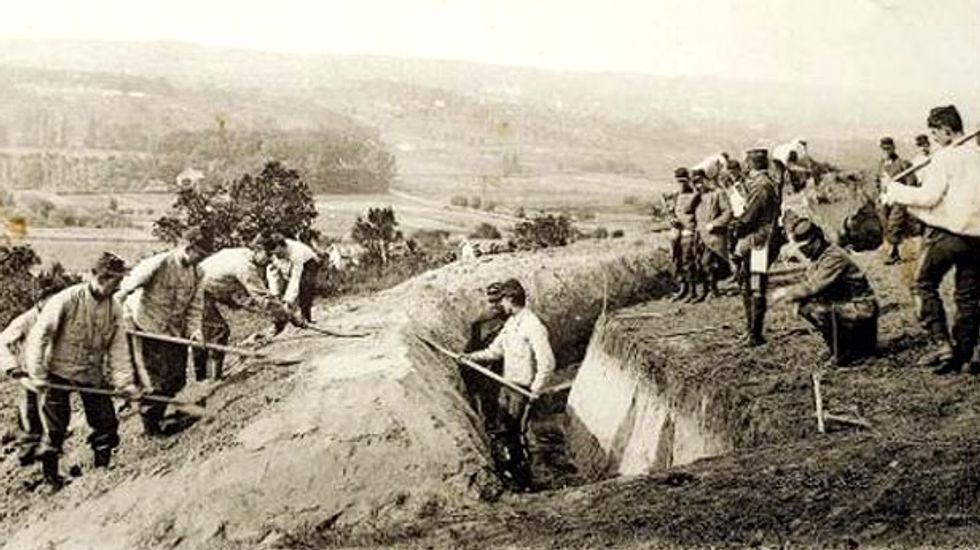 World War I's deadliest and most decisive battles were fought in Europe, on the Western Front slashed through the muddy fields of northern France.

It was there, on a more than 700-kilometre (435-mile) line linking the North Sea to the Vosges mountains, that the war's greatest offensives took place, with staggering loss of life.

But the Great War also raged on the Russian, Balkan and Italian fronts, and spread rapidly to the Middle East, colonial Africa, and Asia where Japan sided with the Allies in seizing German islands in 1914.

The United States intervened late -- but decisively -- in 1917, drawing several Latin American nations into the war. As for the Middle East, it was entirely redrawn by a war that brought about the collapse of the Ottoman Empire.

German troops began their march into Belgium on August 17 after crushing Belgian defences, driving a flood of refugees before them as they advanced on Paris. As France's government fled southwest to Bordeaux, the French were repelled and suffered heavy losses, with 27,000 soldiers killed on the single day of August 22, the deadliest in the history of the French army.

General Joseph Joffre regrouped his retreating armies to fight the First Battle of the Marne, on September 5-12, which succeeded in halting the German advance led by General Helmuth von Moltke.

But the extent of losses this early in the conflict -- more than half a million already -- ruled out any chance of compromise. Fighters burrowed down into rival trenches to shield themselves from a hail of artillery fire. From that point the conflict became a three-year war of attrition that produced little tangible result despite repeated, bloody attempts by both sides to break the stalemate.

Fighting played out quite differently on the less populated Eastern Front whose sprawling expanses made trench warfare impossible.

Right after the outbreak of war, the Ottoman Empire, allied with Germany and Austria-Hungary, closed the Bosphorus Strait to isolate Russia, fighting alongside Britain and France. Russia launched a major offensive into East Prussia on August 15, but its campaign ended the following month with two heavy defeats at Tannenberg and the Mazurian Lakes.

Russia, where the state was on the verge of collapse, began a shambolic eastward retreat which continued until the Bolshevik Revolution of 1917 and the humiliating treaty of Brest-Litovsk in March 1918 which stripped Russia of its western territories and a third of its population.

On the Western Front, 1915 saw a string of bloody but undecisive offensives, marked by the use of modern weapons including machine guns and heavy artillery. German forces made the first ever use of poison gas near Ypres, in Belgium.

In the spring, the Allies -- led on the British side by a young Winston Churchill -- launched a naval and ground campaign in the Dardanelles to prise open the Bosphorus Strait. The battle, which ended in bitter defeat for the Allies, left an enduring mark in Australia and New Zealand whose young soldiers stood out for their courage in the campaign.

Russia enjoyed more success against Ottoman forces, repelling them in the Caucasus and Armenia. But hundreds of thousands of Armenians were to die in mass killings between 1915 and 1917, accused of siding with the Russians in the fighting.

Meanwhile British and German naval forces continued to face off in the North Sea and Atlantic Ocean. To counter a maritime blockade, Germany in 1915 launched a ruthless campaign of submarine warfare, which came to a head in 1917.

As a strategic move this proved decisive, but not in Germany's favour: it would prompt the Americans, outraged by the torpedoing of neutral ships or ones carrying American citizens, to enter the war in 1917.

1916 went down in history as the year of Verdun, the defining battle of the war for the French, and the Somme, which holds the same place in British memory.

The Germans launched the initial offensive at Verdun in February, but French forces managed to contain their advance, at a huge human cost with some 770,000 dead and wounded.

In July, to take the strain off Verdun, British forces launched the biggest battle of the war, near the Somme river, which left 1.2 million men dead, wounded or missing, for minimal territorial gains.

In the Middle East, British forces had invaded Turkish territory from the south in 1914 and went on to encourage the Arab population to rise up against their Ottoman rulers. In 1916, Britain and France struck the Sykes-Picot accord under which they began carving out the shape of the future Middle East.

In 1917 the United States declared war on Germany.

It was also the year of a British offensive in Flanders in Belgium, and a French one at the Chemin des Dames. Dragging out from April to May, the latter was a massive failure for the French and led to mutinies.

In October, Italian forces suffered a disastrous defeat at Caporetto, leaving 300,000 prisoners in the hands of German and Austrian forces -- but the exhausted Central Powers failed to capitalise on their gain.

In December, meanwhile, British general Edmund Allenby entered Jerusalem, after the Balfour Declaration in which Britain backed a national homeland for the Jewish people -- despite promises of self-determination made to the Arab population.

Freed to focus on the Western Front following the Brest-Litovsk treaty with Russia, German forces launched an all-out attempt to break through Allied lines before the arrival of American troops, succeeding in the spring of 1918.

German forces were within reach of the capital, shelling Paris with howitzer guns, when they were stopped by Allied forces placed in April 1918 under the unified command of French General Ferdinand Foch.

The Germans, who seemed poised for victory in the spring, collapsed over the summer as the Allies reclaimed northern France with a series of counter-offensives culminating in the Second Battle of the Marne in July.

At the same time the Austro-Hungarian Empire, Bulgaria and the Ottoman Empire suffered a string of crushing defeats that were to force them into surrender.

Delirious crowds welcomed news of the armistice in France and Britain crippled by four years of all-consuming warfare. But it took years more, with a string of peace treaties to end its various sub-conflicts, for the Great War to come to a final end.