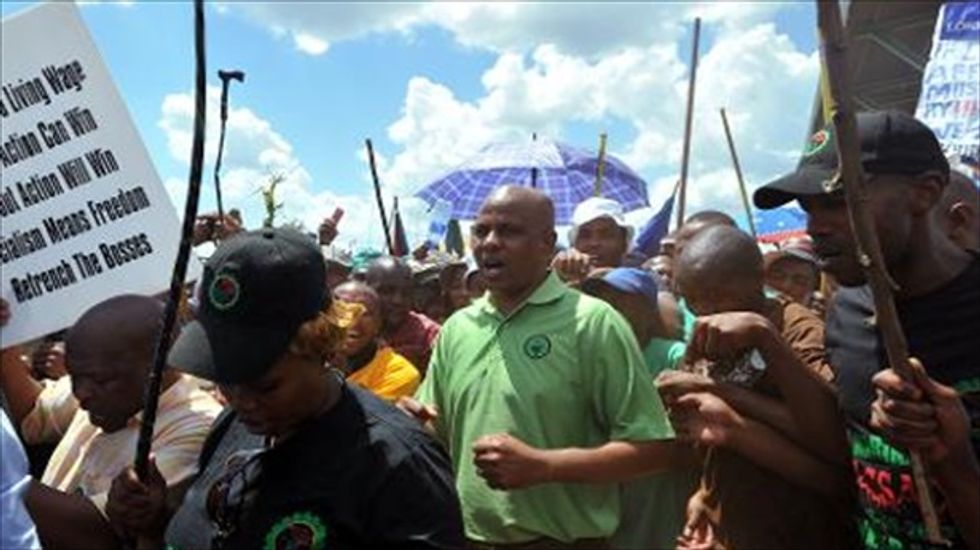 South African national union president Joseph Mathunjwa (C) dances together with striking miners during a rally near a platinum mine in Marikana on Jan. 23, 2014 [AFP]

The world's top platinum miner Anglo American Platinum asked a labour court to rule that leaders of a month-long strike had ignored a court order banning the intimidation of non-striking workers and other activities.

The application seeks to hold officials of the hard-line Association of Mineworkers and Construction Union (AMCU) "in contempt of court for their conduct in breach of the interdict", said spokeswoman Mpumi Sithole.

If upheld nearly forty AMCU leaders, including leader Joseph Mathunjwa, could face a jail sentence, or a steep fine, a member of the union's legal team told AFP.

AMCU argues the rules are part of an interim order, that has not yet been finalised by the court.

A Pretoria court hearing the case adjourned the case until early March.

Tens of thousands of AMCU members downed tools on January 23, bringing production to a halt at hitting mining firms hard.

Anglo American Platinum has hit back with an aggressive legal strategy. Aside from the contempt of court charges the firm is seeking damages of $54 million from the union.

Stop-start talks appear to have done little to narrow the gap between workers, who demand pay rises of up to 150 percent and firms willing to offer about seven percent.

This year's strike action has not led to the levels of violence seen in 2012 -- when dozens died -- but incidents have been reported in the Rustenburg mining belt.

The National Union of Mineworkers, which AMCU recently ousted as the dominant group in the platinum sector, said one of its workers had been attacked with a machete and set alight on Thursday.

"There is no safety for our members who are going to work in the platinum belt," the union said in a statement.

"Our members are intimidated and severely assaulted. It is totally unacceptable."