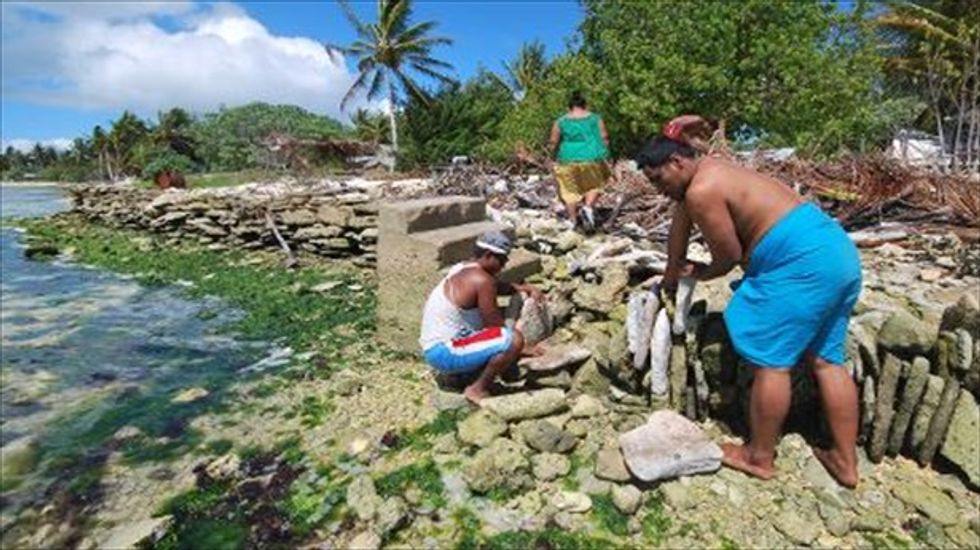 undated file photo, released by the secretariat of the Pacific community (SPC), shows inhabitants of Kiritimati coral atoll building a stone seawall to protect themselves from rising seas [AFP]

Fiji's president has invited residents of Kiribati to move to his country if rising seas caused by climate change swamp their Pacific homeland, reports said on Thursday.

President Epeli Nailatikau made the offer this week while on an official visit to the neighbouring nation of about 30 coral atolls sitting only a few metres (feet) above sea level, the Fiji Sun reported.

"If the sea level continues to rise because the international community won't tackle global warming, some or all of the people of Kiribati may have to come and live in Fiji," Nailatikau told a function in Tarawa on Tuesday.

"Fiji will not turn its back on our neighbours in their hour of need."

Kiribati is among a number of island states -- including Tuvalu, Tokelau and the Maldives -- that the UN Human Rights Commission is concerned could become "stateless" due to climate change.

With erosion gnawing at the coast and crops dying as sea water infiltrates fresh water sources, the government has already purchased 2,000 hectares (5,000 acres) of farmland in Fiji to ensure its food supplies are maintained.

Nailatikau said mass migration to Fiji must be considered if global warming made Kiribati uninhabitable.

"In a worst-case scenario and if all else fails, you will not be refugees," he said.

"You will be able to migrate with dignity. The spirit of the people of Kiribati will not be extinguished, it will live on somewhere else."

Kiribati has a population of approximately 100,000 and absorbing them would be a major challenge for Fiji, which has about 900,000 people, one-third of whom live below the poverty line.

The best scenario for Kiribati involves building sea walls and planting mangroves to repel rising seas, allowing life to continue much as it has for centuries.

In recent years, President Anote Tong has also canvassed the prospect of moving his people to man-made islands, similar to oil rigs, although he concedes it would be an expensive exercise.