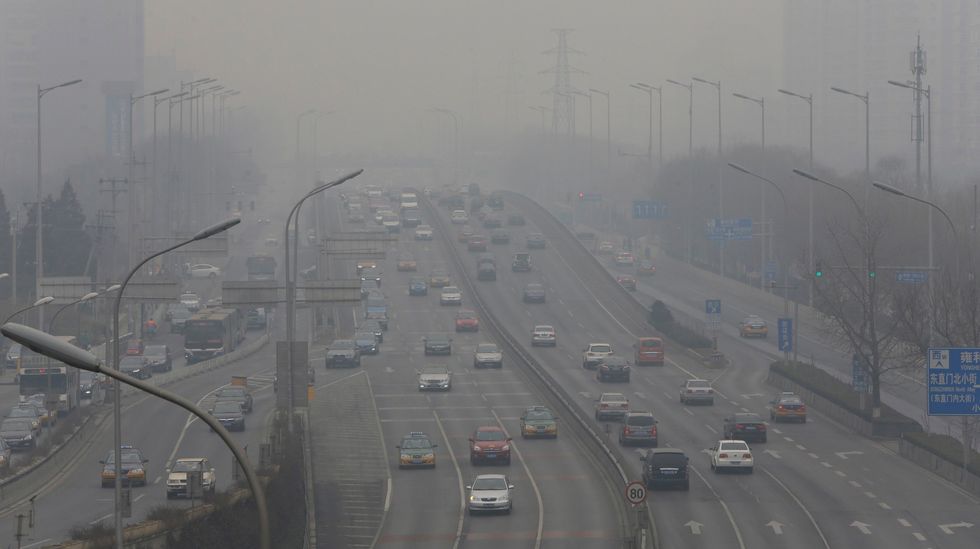 Cars drive on the second ring road amid the heavy haze in Beijing February 21, 2014. REUTERS/Jason Lee

China's capital Beijing, under fire to take effective measures against air pollution, raised its four-tiered alert system to "orange" for the first time on Friday, as heavy smog was forecast to roll into the city over the next three days.

The orange level, the second highest, advises schools and kindergartens to cancel outside sports classes, but falls short of ordering school to close and keeping government vehicles off the road, provisions which come into force with the "red" level.

The alert was raised after the Beijing government faced criticism from state media and on the Internet for failing to act against high pollution levels last weekend.

The capital was already shrouded in smoky, white smog by Friday afternoon. Data from the U.S. embassy put levels of PM2.5 particles, those measuring less than 2.5 micrometers across and the most noxious form of air pollution, at 378.

The U.S. Environmental Protection Agency considers levels above 300 to be hazardous. Last weekend, the index topped 500.

Forecasters said the smog would persist for three days and authorities urged residents to leave cars at home.

Some residents welcomed the announcement. Others asked why more was not being done.

"Excuse me, but do the PM2.5 measurements have to explode off the charts before we see a red alert?" said a user of weibo, China's twitter-like microblogging service.

The stability-obsessed government is keen to be seen as tough on pollution as affluent city dwellers grow weary of a growth-at-all-costs economic model that has tainted much of China's air, water and soil.

Authorities have issued innumerable orders and policies to try and clean up the environment, investing in projects to fight pollution and empowering courts to mete out stiff penalties, including the death penalty in serious cases.

But enforcement has been patchy at the local level, where authorities often rely on taxes paid by polluting industries.

The Beijing government introduced the tiered system last October. But despite several periods of thick smog since then, the plan's stronger measures have never before been introduced.

Public discontent about Beijing's dirty air was highlighted on Friday when a Chinese military expert became the object of scorn online after suggesting smog in the city could be a useful defense against a U.S. military laser attack.