Fisherman says he survived 13 months adrift in the Pacific Ocean 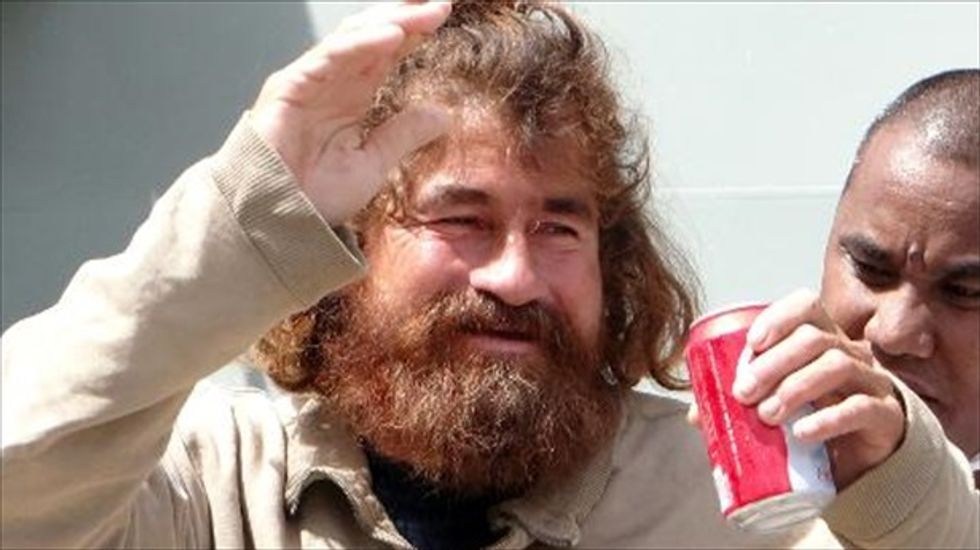 Jose Salvador Alvarenga, a fisherman who says he survived 13 months adrift in the Pacific, is helped off a police patrol boat in Majuro on Feb. 3, 2014 [AFP]

A castaway who claims he survived 13 months adrift in the Pacific said Tuesday he thought about suicide but was sustained by dreams of eating his favourite food -- tortillas -- and reuniting with his family.

Fisherman Jose Salvador Alvarenga also described being forced to dump the body of his teenage companion overboard when he starved to death and how he clung to his faith as he drifted some 12,500 kilometres (8,000 miles) from Mexico to the Marshall Islands.

"I didn't want to die of starvation," he told AFP at Majuro Hospital, where he is recuperating after being found disoriented last Thursday at a remote coral atoll.

"There were times I would think about killing myself. But I was scared to do it," he added before pointing to heaven and declaring: "God! Faith!"

The stockily built Alvarenga looked in remarkably good physical shape when he arrived in the Marshalls capital Majuro five days after landing on the Ebon Atoll.

Sporting a bushy beard and with his hair bleached a ginger colour by the sun, he was helped down the gangplank by a male nurse but he did not appear to have chapped lips, blistered skin or other signs of severe exposure.

However, extraordinary feats of survival are not uncommon in the Pacific. Three Mexicans washed up in the Marshalls in 2006 after nine months adrift.

Fellow fishermen in the southern Mexico state of Chiapas said they had searched for Alvarenga for days, backed by a government helicopter, when he disappeared following a shark fishing expedition in late 2012.

Speaking from hospital, Alvarenga said he would dream of eating all his favourite foods as he drifted across the Pacific.

"But then I woke up and all I see is the sun, sky and the sea," he said. "My dream for over a year is to eat a tortilla, chicken and so many other types of food.

"I would imagine and dream a lot about my family -- my mother and my father," said Alvarenga, who is not married but has a daughter named Fatima.

His parents, who feared he had been killed, were looking forward to a reunion in his homeland of El Salvador.

"It is a divine miracle, a sign that God was compassionate with our son's life," said his mother Maria Julia, 54, who last saw her son eight years ago.

"We will make him a big meal, but we won't feed him fish because he must be bored of eating that," she said from her home in the costal town of Garita Palmera, where she and her husband are raising Alvarenga's 14-year-old daughter.

El Salvador's government says it is working with Mexico to bring him home.

In Chiapas, fishermen said Alvarenga was last seen in the town of Chocohuital before leaving in November 2012 with one day's worth of food and water.

"He communicated once by radio, but when we saw ... that he wasn't coming back, we searched for him. We did what we could," his boss, Guillermino Rodriguez Solis, told reporters.

"I can imagine there are many people who think this story is unbelievable," Hilmar Snorrason, chairman of the International Association for Safety and Survival Training, based in Southampton, England, told AFP.

"He should be given the benefit of the doubt."

Alvarenga said he set out in late December 2012, not November, with a teenager named Xiguel, when they became lost in their 24-foot (seven-metre) fibreglass boat.

"We had just finished a day of shark fishing when the motor died," he said. "I wasn't worried at first but I couldn't get a radio signal, and meanwhile there was a wind that pushed us further out."

The 37-year-old's mood darkened as he described how the boy, who he says was aged 15-18, died four months into their voyage, unable to survive on a diet of raw bird flesh, turtle blood and his own urine.

"I tried to get him to hold his nose and eat but he kept vomiting," Alvarenga said, recalling that he eventually pushed the dead boy's body into the ocean.

Every so often, he would grab sea turtles that bumped into his boat. He also caught fish and learned to stand still in the rocking boat to snatch approaching sea birds.

"The hardest thing I had to do to survive was to drink my own urine" during a three-month period without rain, he said. When it did rain, he used the hull of his boat to store water.

Alvarenga described his joy at making landfall, saying he spotted a house and crawled up the beach towards it.

Two Marshallese came out and helped the stranger, who was clad only in a ragged pair of underpants, by giving him coconut juice.