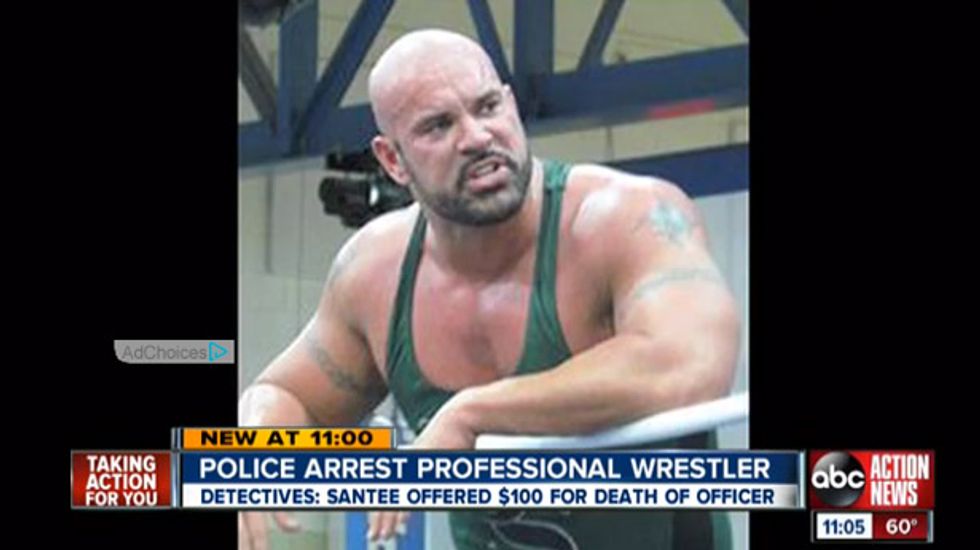 A Pinellas County, Florida,  semi-professional wrestler was arrested on Monday after posting a $100 reward on Facebook to anyone who would kill an officer who stopped a vehicle he was riding in early Sunday morning.

According to ActionNews, Bruce Allen Santee II, 35, who wrestles under the name 'The Marquee, made the offer on Facebook after the officer pulled the Ford Mustang that Santee was riding in over early Sunday morning after the driver failed to obey a yield sign. The unidentified driver, who was driving with an expired license, explained that she was taking Santee and another man home because they were intoxicated.

According police, Santee argued with the policeman, calling him a "pig".

After the officer allowed the group to arrange for  a different ride,  Santee allegedly went home and posted the officer's name on his Facebook page along with a reward of $100  to anyone who would kill him.

An off-duty officer with from neighboring Sumter County contacted the Pinellas Park Police Department through its Facebook page after seeing Santee’s post. Police said Santee later edited his original post but continued to criticize the police.

After officers contacted Santee through a relative, he turned himself  on Monday and was arrested on felony charges. He faces  up to fifteen years if convicted.

Video from ActionNews below