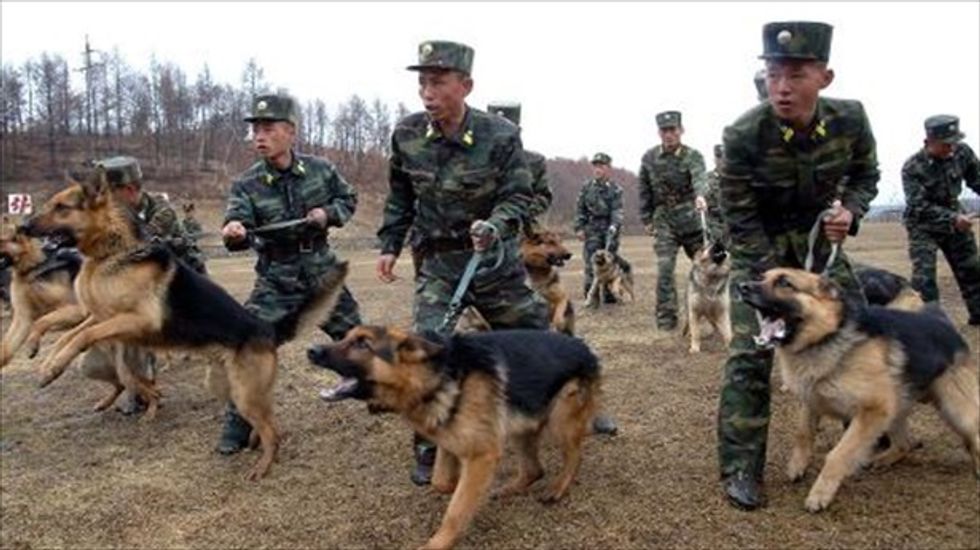 Ahn Myong-Chol witnessed many horrors as a North Korean prison camp guard, but few haunt him like the image of guard dogs attacking school children and tearing them to pieces.

Ahn, who worked as a prison camp guard for eight years until he fled the country in 1994, recalls the day he saw three dogs get away from their handler and attack children coming back from the camp school.

"There were three dogs and they killed five children," the 45-year-old told AFP through a translator.

"They killed three of the children right away. The two other children were barely breathing and the guards buried them alive," he said, speaking on the sidelines of a Geneva conference for human rights activists.

The next day, instead of putting down the murderous dogs, the guards pet them and fed them special food "as some kind of award," he added with disgust.

"People in the camps are not treated as human beings... They are like flies that can be crushed," said Ahn, his sad eyes framed by steel-rimmed glasses.

The former guard is one of many defectors who provided harrowing testimony to a UN-mandated enquiry that last week issued a searing, 400-page indictment of gross human rights abuses in North Korea.

After fleeing the country two decades ago, Ahn worked for years at a bank in South Korea but gradually got involved in work denouncing the expansive prison camp system in the isolated nation.

Three years ago, he quit his bank job to dedicate all his time to his non-governmental organisation, Free NK Gulag.

"It's my life's mission to spread awareness about what is happening in the camps," he said.

Ahn, who today is married with two daughters, knows all too well the brutal mentality of the camp guards.

When he, as the son of a high-ranking official, was ushered onto the prestigious path of becoming a guard in 1987, he says he was heavily brainwashed to see all prisoners as "evil".

At his first posting at camp 14, north of Pyongyang, he was encouraged to practice his Tae Kwon Do skills on prisoners.

And he recalls how guards were urged to shoot any prisoner who might try to escape.

"We were allowed to kill them, and if we brought back their body, they would award us by letting us go study at college," he said.

Some guards would send prisoners outside the camp and kill them as escapees to gain access to a college education, he added.

Ahn said he had beaten many prisoners but said that, to his knowledge, he had never killed any of them.

Although he witnessed numerous executions, starving children, and the effects of extreme torture, it was not until he was promoted to be a driver, transporting soldiers back and forth between camps, that he began to question the system.

During his travels he sometimes struck up conversations with prisoners and was astonished to find that "more than 90 percent" of them said they had no idea why they were in the camp.

Ahn had stumbled across North Korea's system of throwing generations of the same family into prison camps under guilt-by-association rules.

He got a taste of that rule himself. On leave in 1994, he returned home to find that his father had committed suicide after making some drunken, negative remarks about the country's leadership.

Ahn's mother, sister and brother were detained and likely sent into camps, although he is not sure what became of them.

Though Ahn returned to work, he feared he too would be dragged off. So he drove his truck to the shores of the Du Man River and swam across to China, having to dump the heavy weapons he was carrying to avoid drowning.

Once he got involved in the NGO work in South Korea, he was uneasy about meeting former prisoners who had also managed to defect, like Chol Hwan Kang.

Kang was sent to Camp 15 -- where Ahn once served -- with his whole family when he was nine and spent 10 years there to repent for the suspected disloyalties of his grandfather. Ahn remembered him from his time as a guard there.

But Kang, like most survivors, understood he had not chosen his job and had accepted his plea for forgiveness.

"He met me with a gentle handshake," Ahn said.

Last week's UN report was vital to spreading awareness about the reality of the camps, Ahn said, comparing what is happening there to the Soviet-era Gulags.

"The difference is that in North Korea we are still talking in the present tense. These horrors are still happening," he said.