From poison gas to submarines, WW1 was crucible for deadly innovation 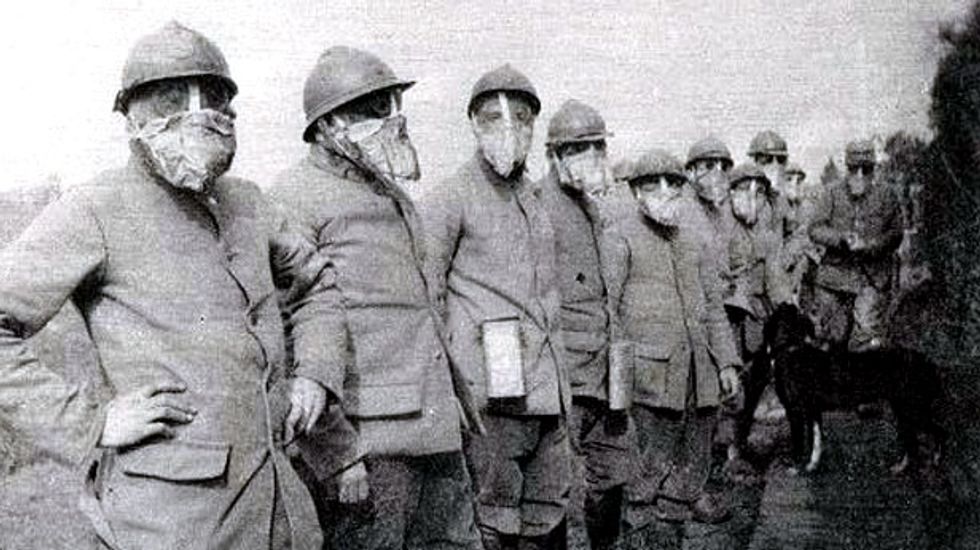 Fighter aircraft, tanks, submarines, heavy artillery: the horrors of warfare between 1914 and 1918 were a crucible for deadly technological innovation, including the poison gas that came to symbolise the barbarity of the conflict.

When World War I broke out in 1914, no European army was prepared for the heavily defensive conflict that was to define the coming years.

Faced with a wall of bullets from machine guns and a deluge of shells from above that German writer Ernst Junger later described as a four-year "storm of steel", armies on all sides dug down into trenches and relied on a formidable array of defences.

Thousands of infantrymen lost their lives entangled in the wires, earning them the grim nickname of "clothes-line" among French veterans.

Britain and France made more attempts than Germany to break through enemy lines on the Western Front.

They focused on perfecting their heavy artillery.

Previously packed with shrapnel, shells were now filled with high explosives that could flatten defences and maximise casualties.

The British also unveiled a new caterpillar-tracked armoured vehicle -- the tank -- in 1914.

Initially clumsy, plodding and prone to frequent break-downs, it was quickly perfected to become a key tool for penetrating enemy lines in the closing stages of the war.

In the early years, Germany was largely content to sit back and wait for attrition to take its toll on the enemy.

It carried out only one major attack on the Western front in 1915 -- at Ypres in Belgium -- and this only to test a brutal new weapon: chlorine poison gas.

Total war destroyed any moral inhibition in the development of weaponry.

The French and Belgian soldiers at Ypres in April 1915 saw thick smoke rising, "then a cloud of green, about 10 metres high, particularly thick at the base, coming towards us, pushed by the wind.

Gas brought a previously unknown level of terror to soldiers on the front line.

The horror of poison gas would permanently scar the collective imagination and forms the root of international condemnation directed against the Syrian regime's chemical attacks against civilians in August 2013.

But it actually had a minimal impact on the outcome of World War I.

Soldiers learned to cover their faces in wet handkerchiefs, soon supplanted by goggles, canvas masks and a medical antidote.

The lethal effectiveness of gas was further blunted by the public revulsion it stirred on the home front. In the end, gas attacks caused less than one percent of the deaths in the war.

Another danger came from the sky. Combat aviation was still in its infancy in 1914, but the war triggered a rapid industrial mobilisation that meant France alone had some 3,700 aircraft by the end of hostilities.

Verdun, in eastern France, was host to the world's first large-scale aerial battle.

"The Great War may have been the quintessential land battle, but it also highlighted a strategic concept that would dominate conflicts in the 20th century: the importance of airpower as a prerequisite for any successful major ground attack," wrote French historian Jean-Yves Le Naur.

Initially, the air was a place for surveillance, helped by improvements in mapping, aerial photography and communications.

The dogfights -- which alone in the conflict retained some vestige of the romantic warfighting of the past -- were primarily geared towards denying the enemy these reconnaissance opportunities.

Bombardments emerged only gradually, most notably in the form of the German dirigible balloons named after their inventor, Graf von Zeppelin.

They were first used to attack Antwerp in August 1914 and then deployed for night raids in the UK from January 1915.

By 1917, long-range German Gotha bombers were carrying out daylight raids in London, and the UK had developed its Royal Airforce for retaliatory attacks in the Rhine, but the technology's deadly potential would not be realised until later.

The other major innovation came at sea. Germany had all but given up trying to compete with Britain above the waterline, but turned its attention to the U-boat that it started building after the outbreak of war.

By 1917, Germany had set itself a target of sinking 600,000 tonnes of shipping every month, and was at first successful.

But the use of convoys to protect ships, produced in vast numbers in US factories, was able to overwhelm the U-boat strategy.

None of these weapons proved decisive. It was ultimately the involvement of the vast US industrial war machine that tipped the scales in favour of the West.

But the firepower and technologies that emerged during the Great War were to define most of the conflicts since then.