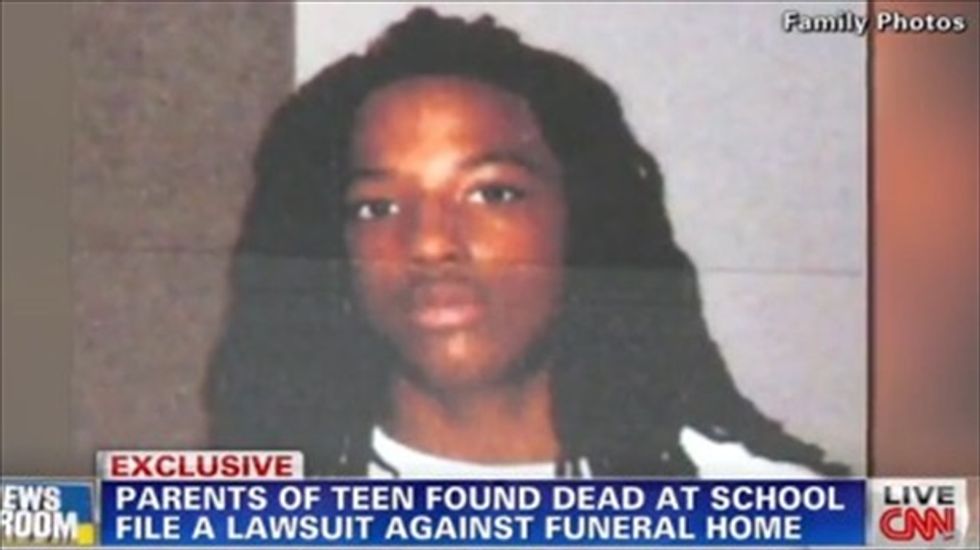 The family of dead Georgia teenager Kendrick Johnson has sued the funeral home that stuffed his body with newspaper, CNN reported on Wednesday.

The suit against Harrington Funeral Home and its staff accuses owner Andre Harrington of "intentionally, willfully and secretly" desecrating the boy's remains. Johnson was found dead at his high school in January 2013, but his family has consistently disputed local officials' claim that he died of suffocation after getting trapped inside a gymnasium mat.

The family eventually won the right to commission an independent autopsy, which determined that "unexplained, apparent non-accidental, blunt force trauma" was a more likely cause of death. Pathologist Bill Anderson, who examined Johnson's remains, also found that the teen's brain, heart, lungs and liver were missing from his body and replaced with newspaper. The suit accuses Harrington of engaging in "measures to dispose of said organs in an effort to interfere" with the original investigation.

Federal prosecutor Michael Moore announced in October 2013 he would reopen the investigation into Johnson's death.

The Georgia Board of Funeral Homes chose not to sanction Harrington's establishment last month, stating in a letter to Johnson's mother that "Legislation or regulation does not address the practice or prohibit funeral professionals from filling a cavity with newspaper. Therefore, the practice is not a violation of the law."

Watch CNN's report, as aired on Wednesday, below.