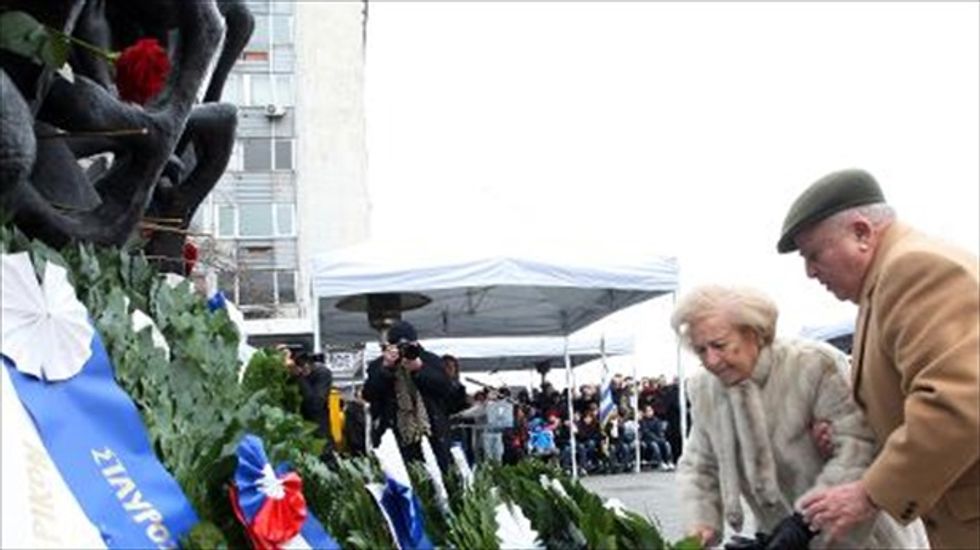 Members of the Jewish community place a tribute at the Holocaust Memorial in Thessaloniki on Jan. 29, 2012 [AFP]

Germany on Wednesday rejected a fresh Nazi-era reparation claim by a Greek city's Jewish community but offered the group cooperation on future projects.

"With regard to issues of reparations, there are no new developments and all these questions are answered," a German finance ministry spokesman told a press conference.

The Jewish community of Thessaloniki said Tuesday it had sued Germany at the European Court of Human Rights for compensation over a forced ransom paid to Nazi occupation forces.

It said Jewish residents had paid 2.5 million drachmas to a Nazi commander in July 1942 to secure the release of thousands of Jewish men submitted to brutal forced labour.

Despite the payment, raised from donations and property sales, most of the victims were later transported to the Auschwitz-Birkenau death camp in Poland where they perished.

A German foreign ministry spokesman said on Wednesday that Berlin was ready to work on unspecified new projects with the city's Jewish community, independent of the legal bid.

"It's our express proposal to pursue forward-looking projects with the Jewish community of Thessaloniki," he told reporters.

The finance ministry spokesman said Germany has always indicated an awareness of its historical responsibility for World War II crimes.

"In the relationship with Greece, questions about the future play the fundamental role," he said.

Greece has said in recent years it reserves the right to claim more wartime reparations, arguing it was forced to accept unfavourable terms during negotiations with Germany in the 1950s.