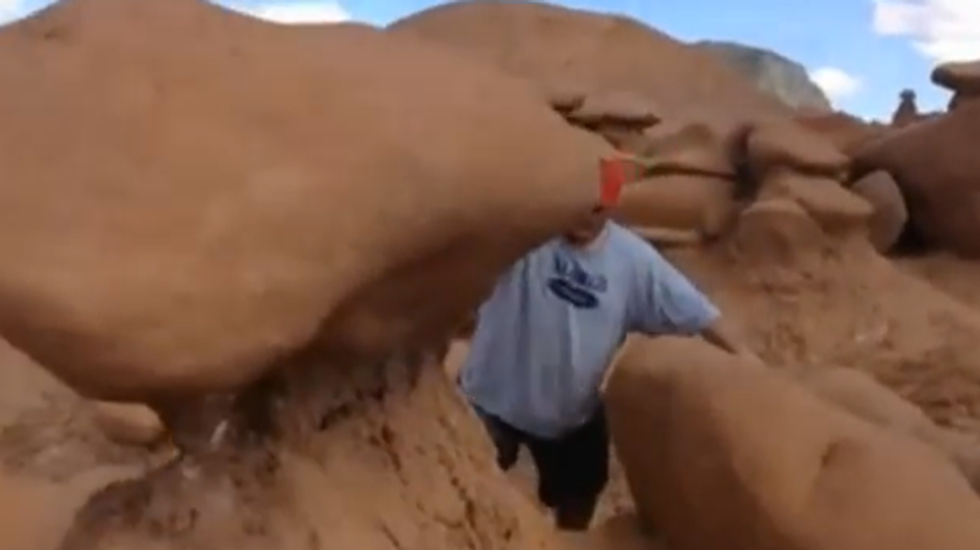 Two former Boy Scout leaders accused of toppling an ancient rock formation in a Utah state park are now facing felony charges  of five years in prison and $5,000 in fines according to the Salt Lake Tribune.

David Hall and Glenn Taylor - who filmed themselves pushing over the 'goblin'-shaped sandstone pillar and posted the video to YouTube - are accused of causing more than $1,500 but less than $5,000 in damages when they pushed over the ancient rock formation on Oct. 11. Taylor, who pushed over the rock, was charged in  Castle Dale’s 7th District Court with third-degree felony criminal mischief, while Hall, who filmed the incident and could be heard on the video cheering, was charged with conspiracy criminal mischief, also a third-degree felony.

If convicted, both men could face up to five years in prison and a fine of up to $5,000.

In a story that made national headlines, the two men were leading a pack of Boy Scouts through the state park last October when they came across a round-shaped rock, weighing thousands of pounds, balanced on a natural pedestal and decided to push it over.  With Hall filming and singing "wiggle it, just a little bit," Taylor pushed the stone over and then proceeded to celebrate his achievement with high fives. Taylor and Hall have maintained that they believed that the rock formation was a risk to hikers traversing a nearby trail.

Within days of Hall posting the video to YouTube, angry constituents began calling Rep. Dixon Pitcher, (R-Ogden) wanting to know why the men hadn't been arrested and charged. Pitcher contacted park authorities and was surprised to discover there is no law specifically addressing the men’s actions.

He has since sponsored a bill, HB68, Protection of State Park Resources, aimed at prevent individuals from damaging, defacing, evacuating, altering, destroying or removing features, formations, sites or geological areas owned by the Utah Division of Parks and Recreation.

Taylor and Hall are scheduled to appear in 7th District Court on March 18.