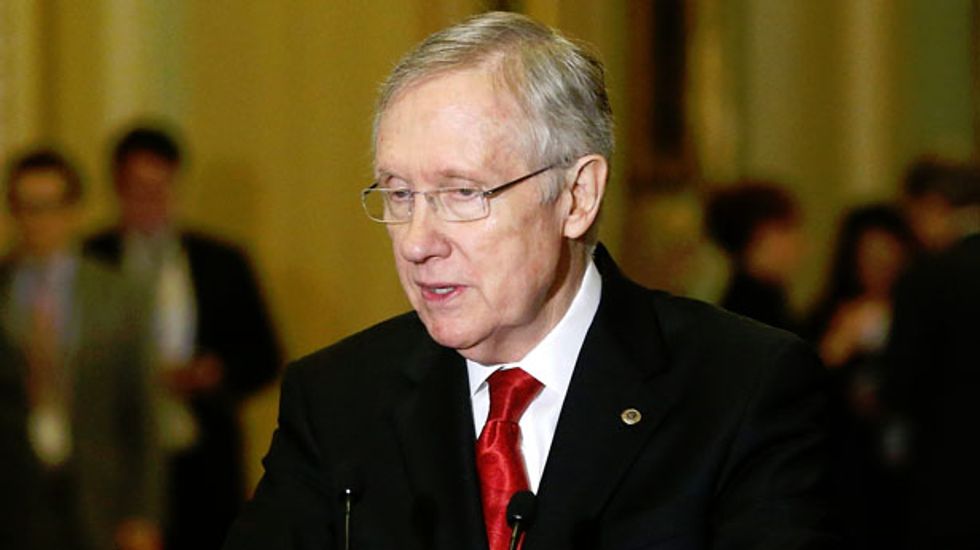 "Those tales turned out to be just that: tales, stories made up from whole cloth, lies distorted by the Republicans to grab headlines forming political advertisements," Reid said.

Reid, a Nevada Democrat, in particular denounced a television ad featuring a leukemia patient who said she would die without medication and blamed the cancellation of her previous policy. Another ad showed a woman who said her policy costs rose $700 a month.

The ad scored "two Pinocchios" out of a possible four by The Washington Post's Fact Checker Glenn Kessler, who said the commercial did not properly compare the patient's old and new plans and did not fully disclose the new plans costs.

Higher out-of-pocket costs with a new plan could be off-set by lower monthly premiums, Kessler wrote, adding that "over the course of the year, the difference in the costs could well even out."

The Koch brothers' vast fortune stems from their oil and gas conglomerate Koch Industries Inc. They have used it to fund numerous conservative causes.

"These two brothers are trying to buy America," Reid said.

A spokesman for Americans for Prosperity could not be immediately reached for comment on Reid's remarks.

The Obama administration announced late Tuesday that some 4 million people have signed up for health insurance through exchanges under the 2010 Affordable Care Act.

Democrats still are struggling to defend the 2010 law after a rocky rollout of the insurance exchange while Republicans are eager to point out its flaws and continue pushing to repeal and replace it.

The success or failure of the healthcare changes are likely to be major campaign issue in the midterm congressional elections in November and possibly the 2016 presidential race.

Shortly after Reid spoke on the Senate floor, House of Representatives Speaker John Boehner began a press conference with reporters by criticizing the healthcare law.

This week, Boehner said, "We'll continue to highlight the devastating impact of the president's healthcare law."

"That's why we need to repeal this law," said Boehner, who had a rare one-on-one meeting with Obama in the Oval Office on Tuesday.

The healthcare law aims to broaden access to health insurance and reduce the number of uninsured people in the United States.

Critics say it allows too much government interference in the healthcare industry, hurts employment and is forcing people to lose health insurance coverage they may have liked.