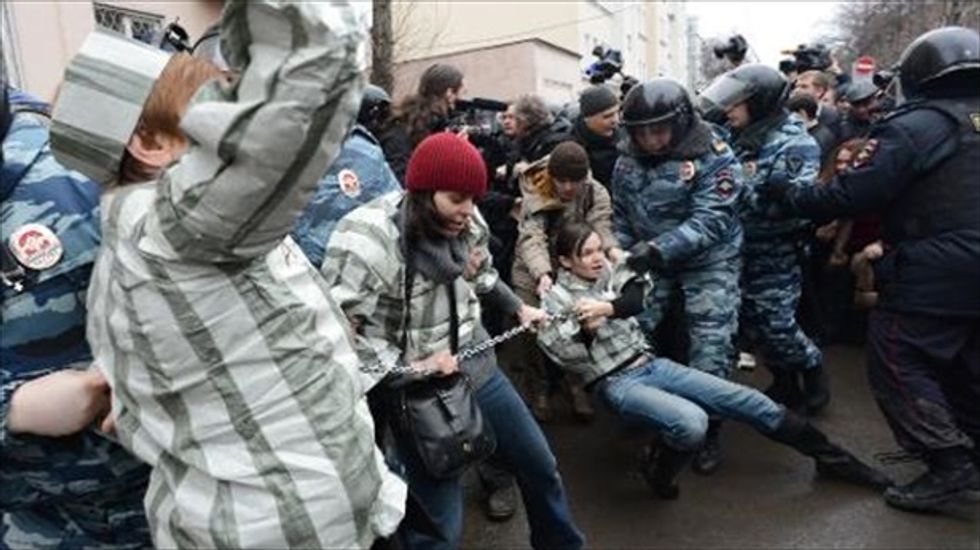 Riot police officers detain protesters outside Zamoskvoretsky district court in Moscow, on Feb. 24, 2014, during a protest against the trial of eight people accused of instigating mass riots after an opposition rally in 2012 [AFP]

A Russian court on Monday sentenced seven activists to prison terms of up to four years over a protest against President Vladimir Putin as police detained hundreds of supporters outside.

A Moscow district court sentenced seven defendants to penal colony terms of between two-and-a-half and four years for what the judge ruled to be "mass riots" during a 2012 demonstration.

The high-profile case has become a symbol of the harsh crackdown on opposition protests since Putin returned to the Kremlin.

The eight in the dock were found guilty of taking part in mass riots and hitting policemen at a rally against Putin's inauguration to a third term as president.

"The sentences are harsh and inappropriate. They were issued based on the political situation, not on the nature of the charges," lawyer Dmitry Agranovsky said, adding that the group would appeal.

His client, 22-year-old Yaroslav Belousov, was sentenced to two-and-a-half years for throwing a lemon at a policeman.

An eighth defendant Alexandra Naumova, 20-year old and the only woman in the case, was given a suspended sentence of three years and three months.

Riot police detained several hundred supporters who gathered outside the court, some shouting slogans such as "Freedom" and "One for all, all for one!"

More than 200 people were detained for "attempts to breach public order", a police spokesman told AFP. Most were released shortly after arriving at police stations.

People later gathered for an evening protest on Moscow's central Manezhnaya square but the entire area was cordoned off with heavy police presence and interior troops, forcing people to crowd on sidewalks.

Several hundred stood near the parliament building nearby as police told them to leave through a loudspeaker and detained people in the crowd, an AFP correspondent said.

Police said 300 were "trying to violate public order", and 70 people had to be detained.

But Ovdinfo, a group that monitors detentions and arrests, said "a minimum of 315 people were detained" at the square and surrounding streets.

The two released members of protest punk band Pussy Riot, Nadezhda Tolokonnikova and Maria Alyokhina, as well as protest leader Alexei Navalny, were among those detained and tweeted pictures from a police van.

Amnesty International condemned the detentions, saying: "the Russian authorities' rampant violation of freedom of expression and assembly shows no sign of letting up".

Tens of thousands marched in protest the day before Putin's May 7, 2012 inauguration, in a rally that ended in scuffles with police.

The clashes on Bolotnaya Square led to dozens of arrests and injuries on both sides. Investigators said the opposition planned to overthrow the government.

Amnesty International called the guilty verdict against the activists a "hideous injustice" and the result of a "show trial".

Judge Natalya Nikishina said Monday that the defendants "took part in mass riots. Their shared blame is established and proved".

But the defence said the case was based on conflicting police testimony that was not supported by any evidence, and that the scuffles did not qualify as mass riots due to a lack of grave injuries or property damage.

The judge handed down significantly lower sentences than the terms of up to six years that prosecutors had requested.

The court had postponed the sentencing until Monday, with the opposition saying this was to avoid publicity before Sunday's closing ceremony of the Winter Olympic Games in Sochi.

"I'm sure Putin didn't want the triumph of the closing of the Olympics to be accompanied with video footage of the detainees," Navalny told TV Rain independent channel.

Most of the defendants have been held in custody since 2012, meaning that some will be eligible for parole later this year.

Putin's spokesman Dmitry Peskov said Monday that like any other prisoner, those convicted "could apply to the head of state with a request to be pardoned" in comments to Slon.ru website.

An investigation into the rally has already seen one person sentenced to four-and-a-half years and a second committed to a psychiatric hospital.