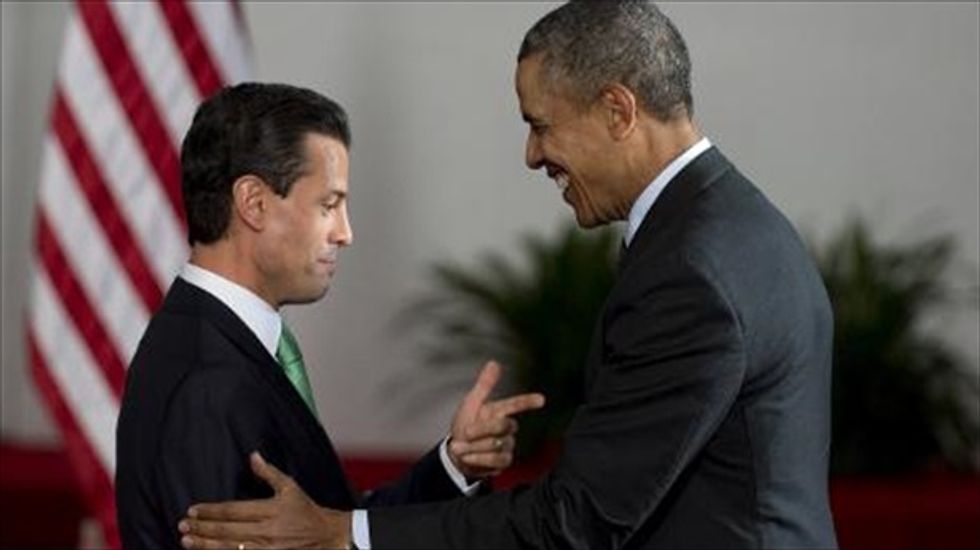 U.S. President Barack Obama joined the Mexican and Canadian leaders Wednesday for a North American summit focused on trade but marked by friction between the "three amigos."

The partners of the 20-year-old North American Free Trade Agreement (NAFTA) are locked in several thorny disputes likely to surface in the talks and at a joint closing news conference.

Pena Nieto has sought to turn attention away from Mexico's security problems, which have left more than 77,000 people dead in a seven-year-old drug conflict, and toward trade and his sweeping economic and energy reforms.

Although the allies want to discuss ways to improve NAFTA through a potential trade pact with Asia-Pacific nations, their talks come with some discord on other issues.

Obama will no doubt face a new entreaty from Harper to quickly make up his mind on the Keystone XL pipeline project, which would carry crude from Canada's oil sands across the continental United States to Texas.

Canada is deeply frustrated at delays in the project, which is awaiting a construction permit and has caught the Obama administration between its backers in the environmental community and claims it will create thousands of jobs.

But Harper is unlikely to get an answer, as Secretary of State John Kerry continues his deliberations on the project.

A senior U.S. official, speaking on condition of anonymity, said Obama would tell Harper that his administration is reviewing the project and will "of course let our Canadian friends know when we've arrived at a decision."

A State Department report last month concluded that the pipeline would not significantly impact global warming, as Canada would extract the dirty tar sands oil even if it is not built.

Pena Nieto will, meanwhile, likely offer Obama some support, but also a measure of frustration over the failure to pass comprehensive immigration reform in the United States.

The U.S. president made the issue a centerpiece of his agenda but has seen his hopes of enacting a law to bring more than 11 million illegal immigrants, many of them of Mexican origin, out of the shadows repeatedly frustrated by Republicans.

Pena Nieto's government has also been investigating claims sourced to documents leaked by fugitive US contractor Edward Snowden that U.S. National Security Agency eavesdropping programs targeted his communications and those of two predecessors.

Mexico and Canada have their own dispute over tough visa requirements imposed by Ottawa on Mexican travelers in 2009 to curb an influx of refugee applications.

Pena Nieto called on Harper after a bilateral meeting in Mexico City on Tuesday to negotiate a solution to eliminate the visas "in a near future."

Duncan Wood, director of the U.S.-based Wilson Center's Mexico Institute think tank, said Mexican-Canadian relations are "frosty" at the moment, partly due to the visa spat.

But also because "for many years Canada has said that Mexico is a crucial partner, but it has done nothing to back that up, and Mexicans are now saying, 'we are tired of this, we want to be shown respect,'" Wood told AFP.

Officials want to focus on improving NAFTA, but they say the deal will not be reopened and that it can be revitalized via the 12-nation Trans-Pacific Partnership trade pact that Washington is hoping to conclude this year.

But Obama's partners will be keen to know how he plans to overcome opposition from fellow Democrats to the deal in a mid-term election year, as well as his hopes of securing "fast-track" powers to swiftly conclude the deal.