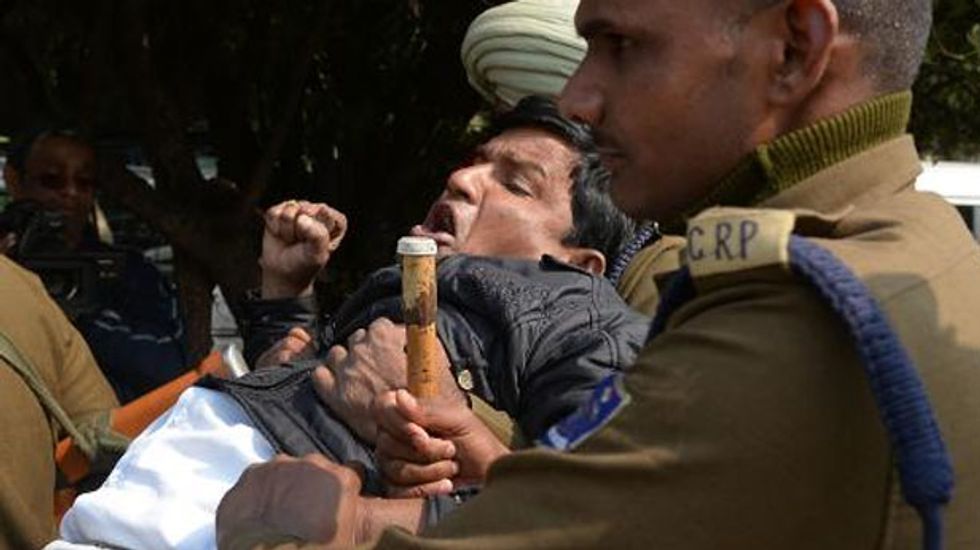 India's parliament erupted in chaos on Thursday over a bill to create a new state, as angry MPs came to blows and pulled out a microphone and one pepper-sprayed the chamber.

Holding banners and shouting slogans, lawmakers disrupted the lower house of parliament as the Congress-led government introduced the contentious bill to carve a new state out of the existing Andhra Pradesh.

Legislators opposed to the new state of Telangana tried to rip out the speaker's microphone while one unleashed a can of capsicum spray, prompting a rush for the exit, TV channels reported.

Small fights also flared between MPs opposed to the bill and several trying to stop the chaos and restore order, as the parliament -- known for its disruptions -- was adjourned, the Press Trust of India (PTI) said.

Parliamentary Affairs Minister Kamal Nath slammed the unrest as a "big blot on our parliamentary democracy" and called for the strongest possible action against the offending MPs.

"It is the most shameful day in our parliamentary history," Nath told reporters outside parliament.

Seventeen MPs were suspended from the house over the behaviour, which also saw lawmakers rip up official papers and smash a glass. Others wore black blindfolds as a sign of protest, PTI said.

In the confusion one MP from Andhra Pradesh, who opposes Telangana, was accused of brandishing a knife in the chamber, a claim he denied.

"I pulled the microphone in front of my seat, not a knife. Why apologise? I will not apologise," Venugopal Reddy shouted at an NDTV reporter.

- Pepper spray used in 'self defence' -

L. Rajagopal was equally defiant over firing the pepper spray, saying he used the can in self-defence after other MPs "pounced" on him.

"They started attacking me. So immediately as a self-defence, I used the pepper spray," Rajagopal told reporters.

Cabinet last week approved the creation of Telangana from the southeastern state of Andhra Pradesh, after a decades-long and sometimes violent campaign.

Mainly tribal groups have demanded Telangana be carved out of a northern, impoverished and drought-prone part of Andhra Pradesh, which supporters say has long been neglected by successive state governments.

But wealthier regions of Andhra Pradesh, home to IT giants including Google and Microsoft in its capital Hyderabad, have strongly opposed the split because they say it would create economic upheaval.

Security at parliament had been high before the bill's introduction after one MP threatened to set himself on fire in protest.

Observers say the Congress government moved on Telangana in hopes of winning much-needed votes in the region at national elections in coming months. But they have warned the move may backfire amid an intensifying political battle in Andhra Pradesh.

Violent demonstrations have erupted there since Congress announced the move last July, while three federal ministers have resigned in protest.

Outside parliament on Thursday, ugly clashes broke out between supporters of the Telangana state and police, an AFP photographer said.

Police dragged away protesters and bundled them into buses.

Congress has denied trying to seek any political advantage from splitting Andhra Pradesh, insisting it is trying to fulfil a longstanding pledge.