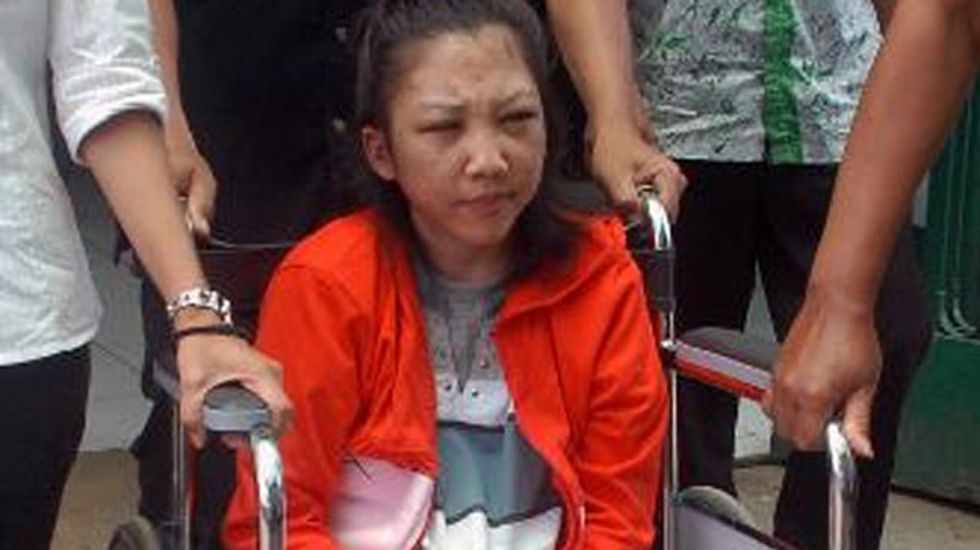 An Indonesian maid allegedly tortured by her Hong Kong employer left hospital Wednesday after a month, tearfully expressing the hope that her case would prevent future abuse of "small people like us".

Erwiana Sulistyaningsih, 23, was admitted to hospital in Sragen, on Indonesia's main island of Java, in critical condition after returning from Hong Kong where she allegedly suffered months of abuse.

As she left hospital, the maid said was feeling much better and wanted to get her "old life back". But shortly afterwards she broke down in tears at a press conference.

"I hope my case will be the last," she told reporters. "I don't want any more people to end up like me. So pitiful, the fate of small people like us."

Her alleged torture sparked angry protests by domestic workers in Hong Kong and Indonesian President Susilo Bambang Yudhoyono even rang the maid to express sorrow over the "tragedy".

It renewed concern about the treatment of maids in the Asian financial hub following similar cases and criticism from rights groups.

Sulistyaningsih's employer has been arrested and charged with assaulting her, and the maid said Wednesday she wanted "justice".

"I want my employer to be punished as severely as possible," she said.

She added she was ready to return to Hong Kong to help in the case against her employer but would never go back to the southern Chinese city to work.

"I am ready to return to testify. What she did was unacceptable," she said.

The domestic worker said she could "laugh a bit more" and was feeling less stressed after a month of treatment, and hoped her life could return to normal.

"I want my old life back. I want to go shopping at the mall, wear make-up, and return to school," she said, before returning to her home village on Java with her family.

Her lawyer Sarli Zulhendra said the family was exploring the possibility of helping with the legal process by teleconferencing so she would not have to go to Hong Kong.

The maid's former employer, 44-year-old Law Wan-tung, was charged last month with assault relating to her treatment of Sulistyaningsih and her two previous Indonesian maids.

A court in the former British colony heard that she turned household items, such as a mop, ruler and clothes hanger into "weapons".

Hong Kong is home to nearly 300,000 maids, mainly from Indonesia and the Philippines.