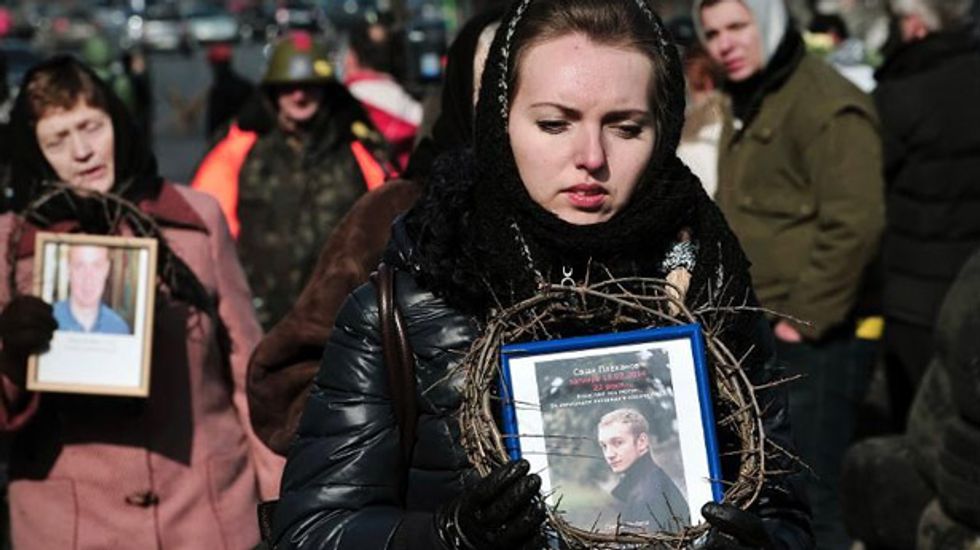 Ukraine's pro-Western interim leaders were set to unveil their new cabinet Wednesday after disbanding the feared riot police as they sought to build confidence in the splintered and economically ravaged ex-Soviet nation.

The new government will be symbolically revealed on Kiev's Independence Square, the epicentre of three months of protests that culminated in carnage last week that triggered the weekend ouster of president Viktor Yanukovych.

"At 7:00 pm (1700 GMT) we will take to the stage to present the new government to the square," Valeriy Patskan, a lawmaker from the party of former boxing champion Vitali Klitschko, said in a statement on the UDAR (Punch) party's website.

The temporary authorities in Kiev are grappling with the dual threats of separatism and a looming debt default as they try to piece the ex-Soviet nation back together following the months of turmoil.

In an apparent bid to begin healing wounds in the divided nation, acting interior minister Arsen Avakov said he had dissolved an elite riot police unit known as the Berkut, despised by many for its heavy crackdown on the anti-government protesters.

The anti-government protests started in November over Yanukovych's decision to ditch an historic EU trade deal in favour of closer ties with old master Russia, and ended in a week of Kiev carnage that claimed nearly 100 lives.

Yanukovych and his tight clique of security chiefs and administration insiders are widely believed to have since gone into hiding in the Russian-speaking southern peninsula of Crimea that is now threatening to secede from Ukraine.

The interim leaders' headaches are compounded by Moscow's decision to freeze payments on a massive bailout package that Russian President Vladimir Putin promised to Yanukovych as his reward for rejecting closer EU ties.

The Ukrainian government faces foreign debt payments of $13 billion this year and has less than $18 billion in its fast depleting coffers -- a grim equation that has forced it to seek as much as $35 billion from Western states.

Both the United States and Britain have publically backed the idea of putting together an economic rescue for Ukraine that would be overseen by the International Monetary Fund.

US Secretary of State John Kerry and Foreign Secretary William Hague also rejected Russia's claim on Tuesday that Ukraine was being forced to make a choice between the East and West.

"This is not a zero-sum game, it is not a West versus East," Kerry said after hosting Hague in Washington.

But EU foreign policy chief Catherine Ashton wrapped up a two-day visit to Kiev on Tuesday by mentioning only a "short term" economic solution for Ukraine while saying nothing about extending the billions of dollars in credit requested by interim leader Oleksandr Turchynov.

Little appears to unite the vast nation of 46 million -- splintered between the Ukranian-speaking west where pro-European sentiment runs high and a heavily Russified southeast -- more than a shared adversion for the Berkut riot police.

The elite units carried shields and Kalashnikov rifles as they cracked down on protesters in Kiev and brutally beat those detained -- forcing one man to strip naked in the freezing cold and parade in front of a police camera in one incident that became infamous through the Internet.

Avakov promised to disclose further details on Wednesday and said nothing about how he would deal with a possible insurrection from one of the country's best-armed and trained forces -- a 5,000-strong contingent with deployments in every corner of Ukraine.

Turchynov and his interim team have been branded by Russia as the leaders of an "armed mutiny", but the newcomers are winning backing from Western powers.

Questions linger however about the constitutional legitimacy of parliament's decision to oust Yanukovych and free opposition icon Yulia Tymoshenko from her seven-year prison sentence.

Britain's Hague is expected in Ukraine shortly while US Deputy Secretary of State William Burns arrived on Tuesday for a meeting with Turchynov expected to be held later on Wednesday.

The line of Western dignitaries now treading their way to Ukraine contrasts sharply with Russia's decision to withdraw its Kiev ambassador in a sign of displeasure with the meteoric pace of change in the neighbouring nation that Putin still views as a part of Russia's domain.

Fears of pro-Russian regions breaking off from Kiev rule forced Turchynov on Tuesday to abruptly walk out of an emergency session of parliament in order to consult his security chiefs.

Top among the concerns are fears of mob violence in Crimea. Crowds have already ousted the mayor of the port city of Sevastopol -- home to the Kremlin's navies for the past 250 years -- and appointed a Russian citizen in his place.

More pro-Russian protests are scheduled in the region on Wednesday.