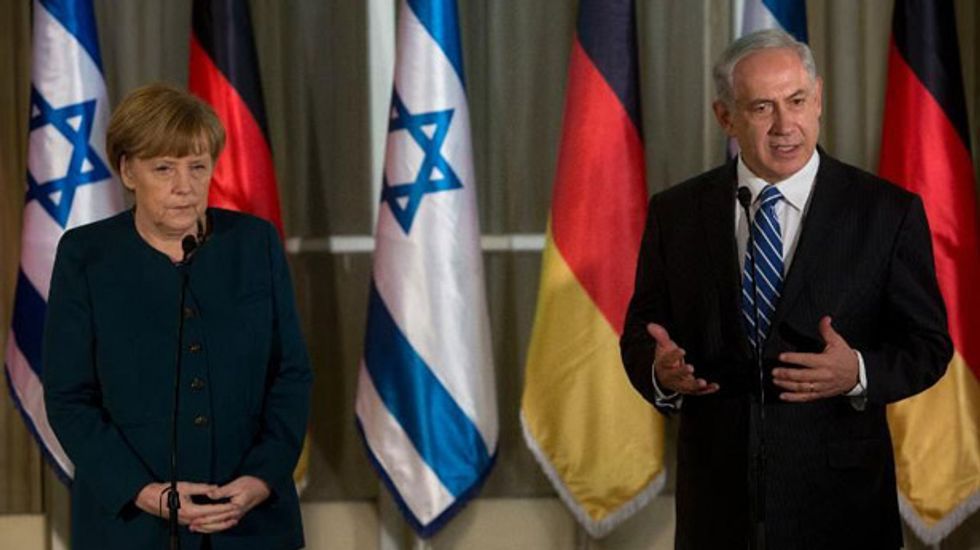 Prime Minister Benjamin Netanyahu said Tuesday Israel was doing all that was "necessary" to ensure its security, following reports of an air raid against Hezbollah targets on the Syrian-Lebanese border.

"We are doing everything that is necessary in order to defend the security of Israel," Netanyahu said at a joint news conference in Jerusalem with visiting German Chancellor Angela Merkel.

"We will not say what we're doing or what we're not doing" to maintain Israel's security, he said in a cryptic reply to a question on the raid.

On Monday night, "two Israeli raids hit a Hezbollah target on the border of Lebanon and Syria," a Lebanese security source told AFP.

Lebanon's National News Agency confirmed the report, adding that the raids targeted the countryside of the Lebanese town of Nabi Sheet on the border.

The Shiite Hezbollah movement is an arch-enemy of Israel, and has sent thousands of fighters across the border to aid Syrian President Bashar al-Assad's regime as it battles Sunni-led rebels.

Syria has long provided arms and other aid to Hezbollah, and served as a key conduit of Iranian military aid to the movement, which battled Israel to a bloody stalemate in 2006.

Residents of Nabi Sheet told AFP they saw flares light up the sky ahead of the raids, which shook their houses.

People in neighbouring areas said they heard planes flying low and that the target appeared to be a Hezbollah position in the mountains near the town.

Nabi Sheet is a bastion of Hezbollah, and the group has a suspected weapons store and training camp there.

The morning after the attack, the Israeli army refused to comment, but Israel's media implied the Jewish state's air force was behind the strikes.

There was no official comment from Hezbollah, Syria or Lebanon.