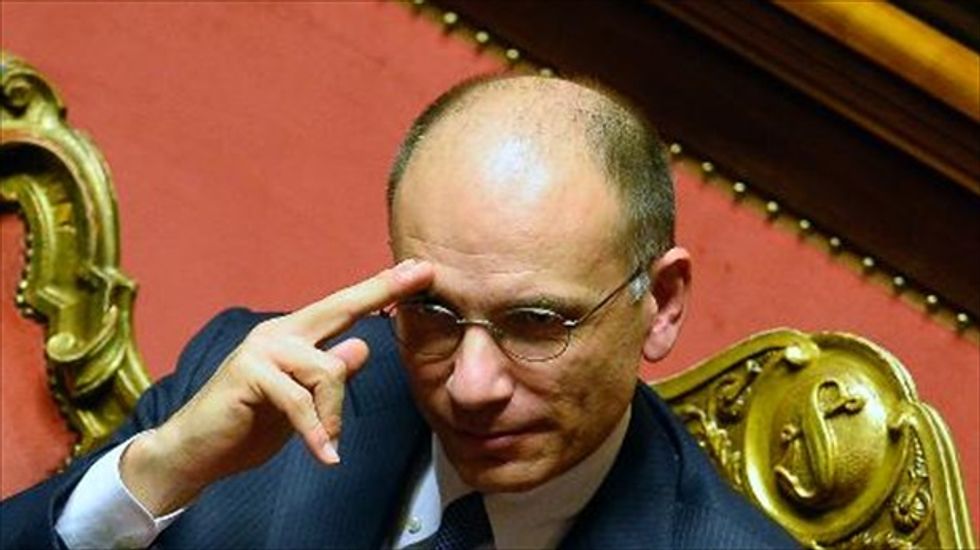 Italian Prime Minister Enrico Letta announced his resignation on Thursday after his own party voted against his leadership, with 39-year-old leftist Matteo Renzi now expected to replace him.

Letta said he will submit his resignation to President Giorgio Napolitano on Friday after less than a year at the head of an uneasy left-right coalition and just as Italy is beginning to emerge from a painful recession.

Members of the centre-left Democratic Party's governing directorate voted 136 in favour and 16 against a motion requesting a change of government submitted by Renzi in a dramatic climax to a weeks-long feud with Letta.

"A simple and courageous country," Renzi tweeted at the end of a tumultuous political day, with the hashtag #proviamoci (#letstryit).

Renzi called on the Democratic Party to back a new "radical programme" and a government that could last until the end of the legislature in 2018.

"We have to offer a way out of the quagmire," he said.

The party thanked Letta, who only came to power in April, for his "positive work" but called for "a new phase with a new executive".

Ever since being elected to lead the party in December, the ambitious and media-savvy Renzi has accused Letta of dragging his feet on crucial political reforms and failing to do enough to combat rampant unemployment.

Letta will now hold his final cabinet meeting starting at 1030 GMT on Friday, then formally submit his resignation to Napolitano who will have to name someone to replace him -- with Renzi virtually certain to be his pick.

A new cabinet could be in place by next week, following a round of formal consultations with political parties hosted by the nominee for premier.

In the space of just a few days, a possibility that Renzi himself and top party leaders had excluded until very recently could take shape and Renzi could become the youngest government leader in the European Union.

Some analysts however were sceptical about Renzi's chances once in power.

"He will be forgiven all of this if he manages to do important things but his would be a weak government," Orsina said, pointing out that the fragmentation of political forces in parliament would be unchanged.

Marco Bracconi from La Repubblica warned that if Renzi fails to implement reforms "he will be remembered as a presumptuous and boorish meteor who destroyed everything and failed to build -- all due to a personal ambition".

In a note to investors, Germany's Berenberg Bank said a Renzi government in charge until 2018 "would probably be the best possible outcome for Italy".

"Renzi promises to step up the pace of reforms. He claims that is the reason he wants to replace Letta. And Renzi may well deliver," it said.

Thursday's meeting also exposed divisions within the party with one dissenter against Renzi, Pippo Civati, likening the internal struggle between his party's leader and Letta to the 1980 horror film "The Shining".

Renzi, a former Boy Scout and the mayor of Florence, is running high in the opinion polls because he is seen as a relative outsider on the national political scene with on-the-ground local experience.

He has never been in government or parliament and often rails against the costs of the political machine. His catchphrases and informal style appeal particularly to younger voters and he often communicates through social media.

Tensions had been rising in the Democratic Party ever since Renzi won the party leadership in December and several experts had said that a long "cohabitation" between Letta and his party's leader would have been impossible.

Renzi's star has risen just as Silvio Berlusconi's has waned.

The disgraced former prime minister has spoken highly of the young Renzi, stirring unease among leftists in the party but opening up a potential for "transversal" appeal for Renzi to disgruntled centre-right voters.