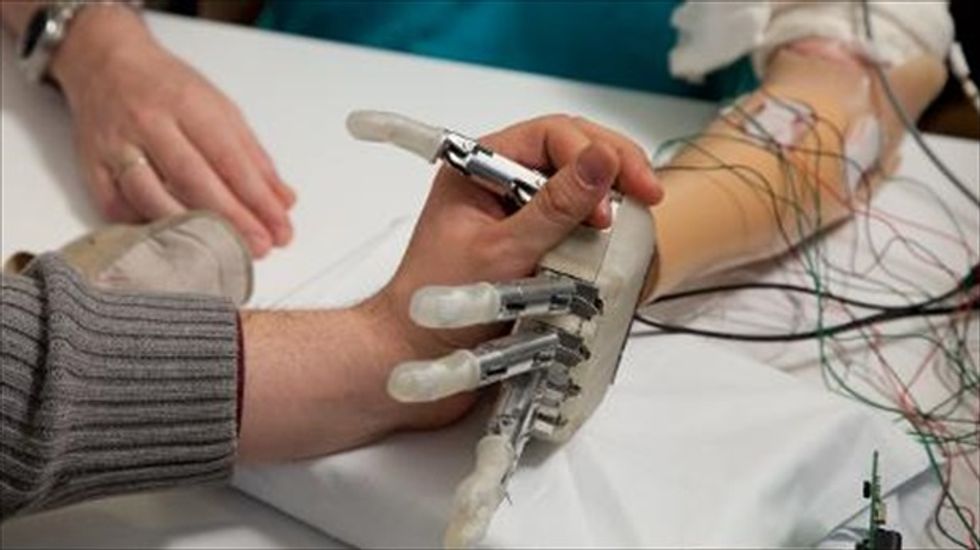 An amputee with a bionic hand has for the first time been able to feel the texture and shape of objects in his grasp, European researchers said Wednesday.

The success of the month-long trial in Italy has energized researchers in the hunt to solve one of the most difficult challenges in prosthetics.

Until now, moveable prosthetic hands have returned no sensation to the wearer and have been difficult to control, meaning the user could crush an object while trying to grasp it.

"For the first time we were able to restore real time sensory feeling in an amputee while he was controlling this sensorized hand," said lead author Silvestro Micera.

The study was led by Micera and Stanisa Raspopovic and colleagues at Switzerland's Ecole Polytechnique Federale de Lausanne and the BioRobotics Institute in Pisa, Italy.

Their findings appear in the US peer-reviewed journal Science Translational Medicine.

"When I held an object, I could feel if it was soft or hard, round or square," said Dennis Aabo Sorenson, a 36-year-old man from Denmark who lost his left hand in a fireworks accident.

"I could feel things that I hadn't been able to feel in over nine years," he added, describing the sensation as "incredible."

Sorenson was fitted with a bulky mechanical hand that had several advanced sensors in each of the fingertips.

Those sensors delivered electrical signals through wires to several electrodes that were surgically implanted into his upper arm.

Even though his nerves had not been used in nearly a decade, scientists were able to reactivate his sense of touch.

Wearing a blindfold and earplugs for the trial, which took place last year in Rome at Gemelli Hospital, Sorenson found he could tell the difference between a mandarin orange and a baseball.

He could also feel whether he was holding soft tissue, a hard piece of wood, or a flimsy plastic cup.

Sorenson joked that his children called him "The Cable Guy," when they saw all the wires coming out of his arm, hooking him up to the stationary hand, which was posed on a table.

Sorenson's implant was removed after 30 days due to safety restrictions, but experts believe the electrodes could stay in for years without problem.

More tests are ongoing. Researchers are working to refine the sensory abilities of the prosthetic hand and make it portable by miniaturizing the electronics.

A mass-market sensory prosthetic is at least five years away from being developed, according to the team.

In the meantime, Sorenson has returned to using his old prosthetic hand, which opens and closes when he squeezes or relaxes a muscle in his arm, but does not allow him to feel what he touches.

Researchers who were not involved with the study said the work offers a promising new step towards a bionic hand.

David Gow, director of rehabilitation engineering services and bioengineering at NHS Lothian in Scotland, said that although the work involved a single case study, the method appears "practical."

"This opens up exciting possibilities for artificial limb users," he added.