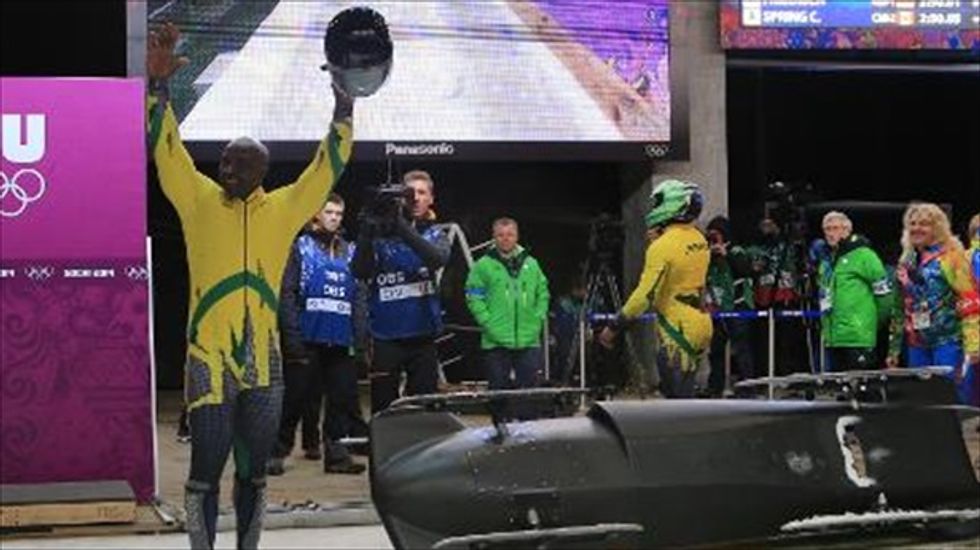 Jamaica-1 two-man bobsleigh pilot Winston Watts celebrates in the finish area after the Bobsleigh Two-man Heat 3 at the Sliding Center Sanki during the Sochi Winter Olympics on Feb. 17, 2014 [AFP]

Undeterred by their dismal showing at the Sochi Olympics, Jamaica's bobsleigh pilot Winston Watts on Tuesday said he was ready to hand over the baton to the next generation in the Caribbean island nation.

Jamaica's bobsleigh team were immortalised in the Hollywood blockbuster "Cool Runnings", based on the exploits of their predecessors at the 1988 Calgary Games.

Back at the Games after a 12-year absence from the competition, Jamaica -- with Watts and brakeman Marvin Dixon in the two-man sled -- limped in second from last on Monday.

Watts, 46, praised the Russian fans for their vocal support as his distinctive black, yellow and green sled flew down the track at the Sanki sliding centre.

"After I got to the finish line... when I looked in that stand it was 99 percent Russian and these people they cheered for us. I take my hat off to you guys," he said.

The team were helped on their journey to Russia by donations from around the world and buoyed by the goodwill of their global fan-base.

They managed to overcome a serious setback right after their arrival in Sochi as their luggage and equipment went missing on their way to Russia.

"Our journey here was not easy. There is nothing easy in life. It was a rocky road to get here," said Watts, adding that he had been lifted by a message of support from Jamaican sprint legend Usain Bolt.

But despite his unquenchable enthusiasm, the veteran, competing in his fourth Olympics, said it was finally time to let the new generation have their chance.

"Our main goal towards the next Olympics is to have young pilots, get younger athletes to portray their dream to go forward to the South Korean Olympics," he said.

"I'm still going to continue for maybe a year or two and just give it up to younger people so they can bring the legacy on," he added.

Watts spoke of the difficulties of leaving Jamaica's sun and sand behind to go and live and train in the US state of Wyoming, where he worked for a natural gas company.

Chris Stokes of the Jamaica Bobsleigh Federation -- a member of the legendary 1988 four-man team -- said there was talent coming up through the system that would serve the country well in the future.

"We intend to go forward to Korea (2018 Games in Pyeongchang) and beyond with a very good programme," he said.

"We have athletic ability, we have shown we can do it. We just need to pull things together in Jamaica itself," he added.