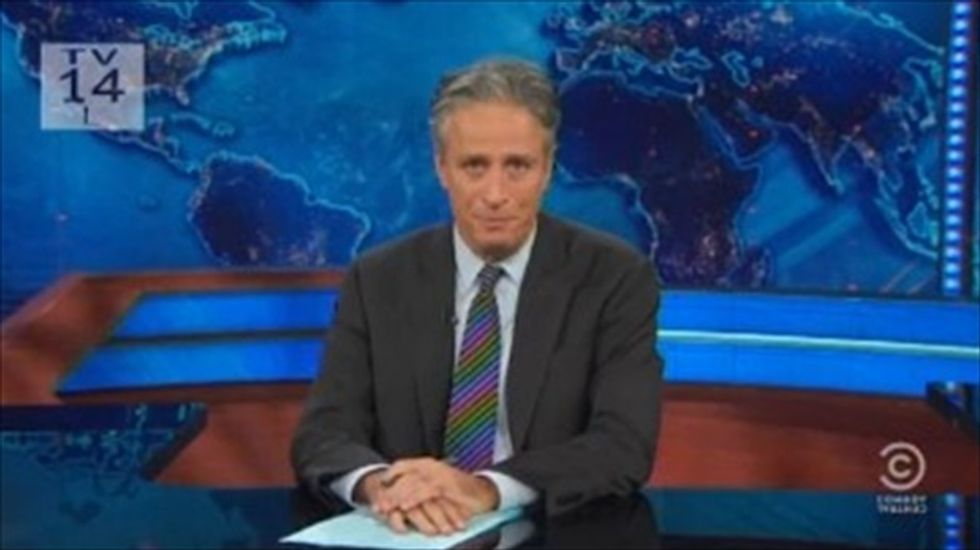 For a second, Daily Show host Jon Stewart felt he was getting trapped in a "distraction loop" generated by Fox News' insistence that President Barack Obama is forever trying to mislead the country, no matter what he's discussing. Then he came to a realization.

"Unless, of course, Fox News is attempting to distract us from noticing that, rather [than] being a news organization, they're a spite-driven anger machine rooted in a fear that any change in the status quo will inevitably erode our nation's traditional power structure, leading to internment camps for 'Real 'Muricans,' powered by solar energy and tacos," he reasoned, before correcting himself slightly. "Wait -- hard-shell gay tacos."

"Brilliant move," Stewart said of Obama's "tactic." "Distract the spotlight from your many scandals by doing an interview with Fox about them right before the most-watched event in the history of television."

Stewart then played a montage of months' worth of Fox News clips accusing the president of trying to head off discussions about the Affordable Care Act any time he chose to focus on another issue.

"You know the president doesn't work for Fox, right?" Stewart said. "He can deviate from your script. It's like, 'Equal rights for gay people? That's not your line. Your line is, Yes, Obamacare is a rear-guard assault on the American values that we hold dear. Soon, I and my Muslim overlords will control the entire caliphate.'"