Kiev prepares for new battles as Obama warns of 'consequences' 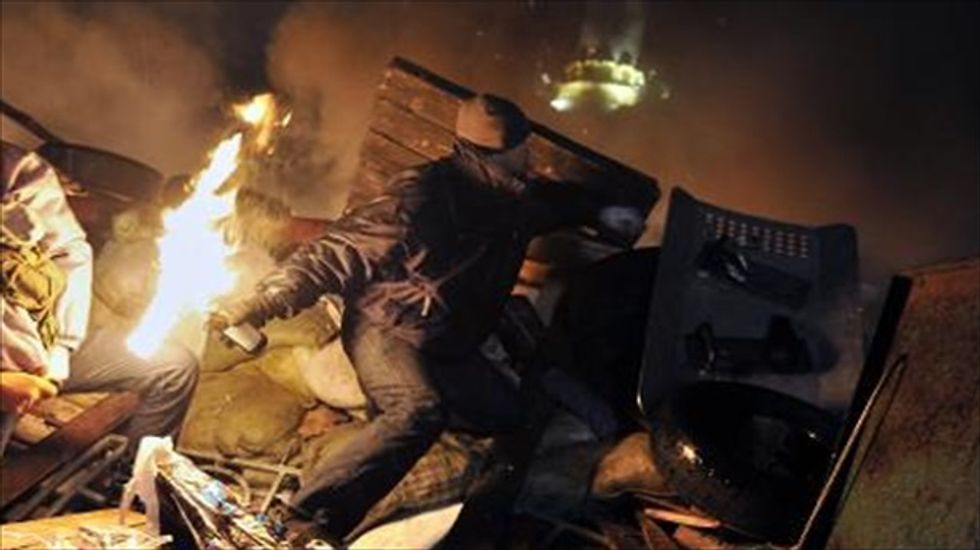 A protester hurls a molotov cocktail towards police from the barricades at Independence square in Kiev on Feb. 19, 2014 [AFP]

Thousands of helmeted protesters steeled themselves Wednesday for new clashes with riot police on Kiev's flame-engulfed main square after the deadliest night of violence in Ukraine's post-Soviet history.

U.S. President Barack Obama warned starkly of "consequences" after apocalyptic scenes on Tuesday in which 26 officers and civilians died as battles broke out across central Kiev.

Obama said he held President Viktor Yanukovych's pro-Russian government responsible for ensuring that Ukrainians could protest "without fear of repression".

Yanukovych responded to the mounting pressure by announcing a "truce" and the start of direct talks with the opposition after receiving three top opposition leaders in a presidential office that less than a block from the site of Tuesday's deadliest violence.

But the scenes playing out in the heart of Kiev on Wednesday evening suggested a war zone that was being reinforced from all sides before a new fight.

Pungent smoke from car tyres rose over the capital's iconic Independence Square while bursts of gunfire and exploding stun grenades echoed across the paralysed city centre as determined protesters faced off over burning barricades against lines of heavily armed troops.

The shocking scale of the violence three months into the crisis brought expressions of grave concern from Western leaders and condemnation of an "attempted coup" by the Kremlin.

The nation of 46 million people sits on the geopolitical border between Russia and the West, and the crisis was ignited by Yanukovych's decision to ditch a historic European Union agreement in favour of closer ties with Russia.

Obama cautioned Yanukovych that Washington was "watching closely" as the EU for its part called an emergency meeting for Thursday to discuss sanctions against those responsible for the use of force.

The foreign ministers of Germany and Poland -- two leading proponents of stiff EU sanctions -- along with France prepared to hold urgent talks with Yanukovych in Kiev on Thursday morning before flying back to Brussels to consider imposing measures against his ministers.

Yanukovych gave off conflicting signals on Wednesday that suggested a leadership grasping for answers to the country's worst crisis since it gained independence two decades ago.

He showed unbending resolve on Wednesday afternoon by announcing plans to launch a sweeping "anti-terror" operation and sacking the army's top general -- a powerful figure lauded by the opposition for refusing to back the use of force against those who had come out on the street.

But he then received three top protest leaders and told them he would take no immediate action against those who have taken to the streets against his rule.

"The sides announced a truce and the start of a negotiations process aimed at ending the bloodshed (and) stabilising the situation in the country for the benefit of civil peace," a statement posted on the president's website said after talks that included opposition leader Vitali Klitschko.

The Cold War-style confrontation between Russia and the West over Ukraine's future gained steam on Wednesday with a string of outraged comments from Moscow that included condemnation of the protesters, EU officials and Washington.

President Vladimir Putin's spokesman placed all responsibility for the violence on "extremists (whose) actions can be seen and are seen in Moscow exclusively as an attempted coup d'etat".

The Russian foreign ministry bluntly referred to Ukraine as a "brother" country -- a clear reference to Moscow's view of ex-Soviet states as its historic sphere of influence that must not be meddled with by the West.

The heated rhetoric prompted a telephone conversation between Putin and German Chancellor Angela Merkel aimed at finding a joint solution to the crisis that could head off the diplomatic tensions.

"We have decided to stay in very close contact with Russia," Merkel said alongside French President Francois Hollande and European Commission chief Jose Manuel Barroso after talks in Paris.

Barroso for his part said he had urged Yanukovych in a telephone conversation to engage in a "sincere and constructive political dialogue with the opposition".

Kiev protesters -- many wearing ski masks to hide their identities -- meanwhile took control of both the central post office and the state radio and television headquarters that sit on the edge of Independence Square.

The move was largely symbolic because the imposing building had already been empty and only serve as the office space for officials responsible for bureaucratic affairs.

But the state media centre was transformed into new provisional headquarters for the Kiev protest movement after its hand-picked leaders were forced to vacate another government building on the square after it was engulfed in flames.

"This is where activists can turn to for information and where they can get any help they want," media centre coordinator Eduard Bubnyak told AFP.

Volunteers streamed into the media centre's makeshift kitchen on the first floor with donations of food and blankets as Bubnyak spoke. Several medics prepared piles of medicine and bandages to treat the wounded in a room nearby.

Ukrainian media reports said protesters on Wednesday had also stormed the administration building in Poltava -- a region in eastern Ukraine that had represented the base of Yanukovych's pro-Russian support.