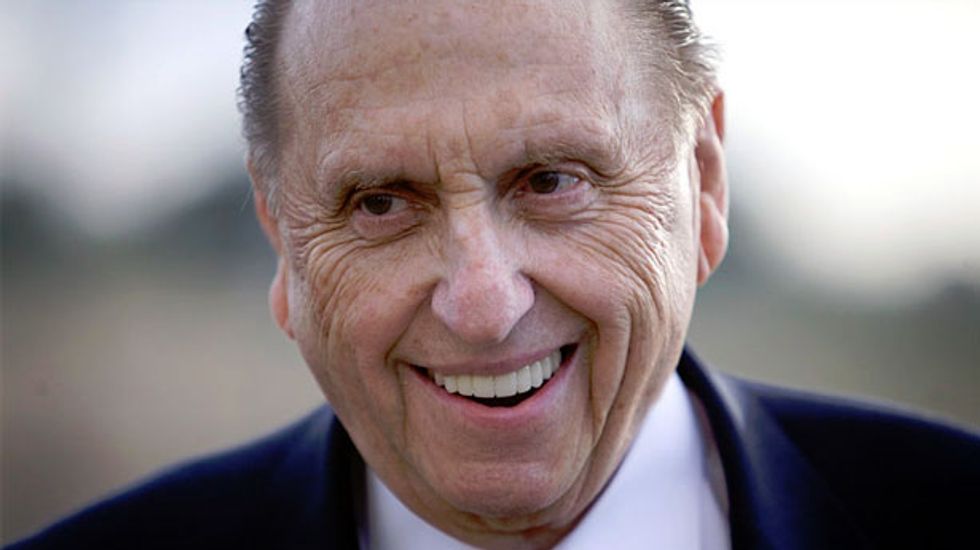 A disgruntled former Mormon has convinced an English court to file two summonses to appear against Thomas S. Monson, the current president of the Mormon Church.

Tom Phillips based his complaint on the Fraud Act of 2006, a British law that outlaws making a profit off of false representations. According to Phillips, this is precisely what the Mormon Church does -- it uses statements it knows to be factually untrue in order to secure tithes from members of the Church.

The facts in question, court records show, are tenets of the Mormon faith, including that Joseph Smith translated The Book of Mormon from ancient gold plates, that Native Americans are descendants of a family of Israelites, and that death didn't exist on this planet until 6,000 years ago.

"These are not statements of mere 'beliefs' or opinions or theories," Phillips wrote. "They are made as actual facts and their truthfulness can be objectively tested with evidence."

Although Phillips can prove that Native Americans are not of Middle Eastern origins using contemporary genetic evidence, it is unlikely that such a finding would have the force of law in a British courtroom.

Neil Addison, a former crown prosecutor whose specializes in issues relating to religious freedom, said he was "sitting here with an open mouth. I think the British courts will recoil in horror. This is just using the law to make a show, an anti-Mormon point. And I'm frankly shocked that a magistrate has issued it."

Since 2007, the Mormon Church in England has taken in over $257 million in tithes, and the summonses request Monson come to England and prove that they were not collected on knowingly false pretenses.

A British solicitor, Harvey Kass, said "I can't imagine how it got through the court process. It would be set aside within 10 seconds, in my opinion." Neither Kass nor Addison believes the British government will act upon the summonses and seek to extradite Monson, or that the United States would comply with an extradition request made on anti-religious grounds.