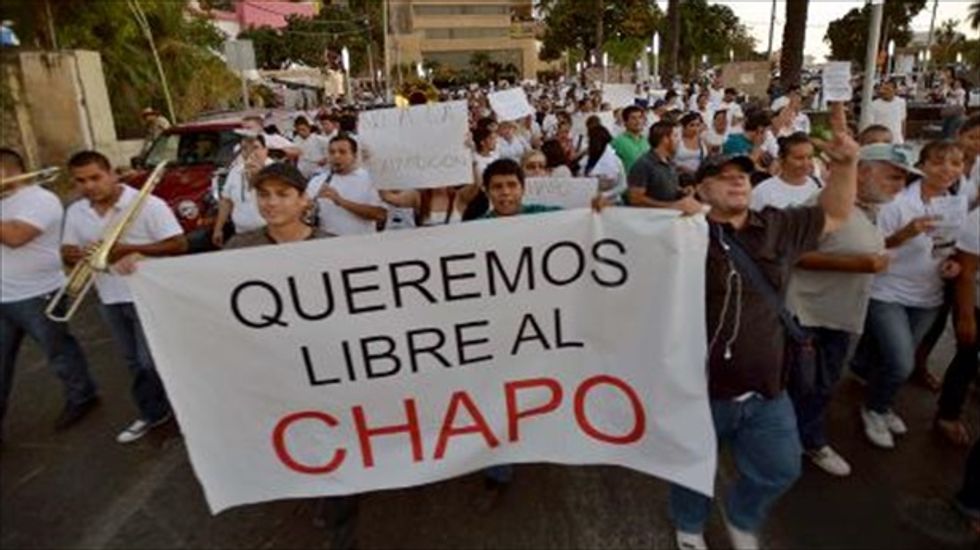 Some 2,000 people marched late Wednesday in Culiacan, capital of Sinaloa state, chanting "Viva El Chapo!" and holding signs calling for his release following his weekend arrest in a beach resort.

The demonstration was held hours after a helicopter dropped anonymous fliers on the city of 860,000 people, urging residents to hit the streets for "the release of El Chapo, hero of Sinaloa."

Dressed in white, the demonstrators were accompanied by a band with trumpets as people served beer and tamales (cornmeal dough filled with meat).

Messages of support for the 56-year-old Sinaloa cartel leader also appeared on Twitter, with the hashtag #ILoveChapo.

Governor Mario Lopez Valdez said Thursday he was surprised that people would march for Guzman and that he did not know who had organized the demonstration.

"But the investigation must find out. It is something we did not think could happen, and we do not support it," Lopez Valdez told the Televisa broadcaster.

The governor said his lawyers recommended he allow the "freedom of expression and assembly."

Police detained 10 people during the demonstration. They were fined and released the same day, a Culiacan municipal official told AFP.

Despite being Mexico's most wanted man for the past 13 years, Guzman spent most of his time in bustling Culiacan, a US government official has told AFP.

Mexican marines had nearly captured Guzman in one of his Culiacan homes last week, but he fled through a tunnel, hidden under a bathtub, that was connected to the city's drainage system.

The marines, backed by intelligence provided by the US Drug Enforcement Administration, found Guzman further south in the resort of Mazatlan on Saturday.

Cartels have been known to organize protests in various Mexican cities to reject the presence of police and the army in their territory, but rallies in support of a capo are rare.