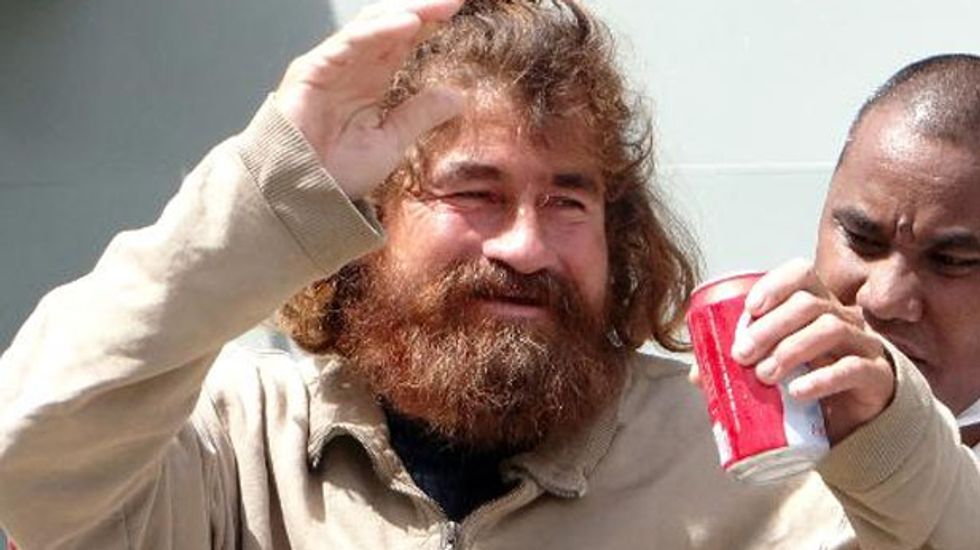 But a young man who accompanied him on the shark fishing trip in late 2012 died, and the victim's family wants Alvarenga to return to Mexico to explain what happened.

Fellow fishermen in Chocohuital, a village nestled on a lagoon in the southern state of Chiapas, remembered Alvarenga as a good man with a quirky diet that they say gives credence to his amazing story.

The burly man they knew as "La Chancha," the Spanish word for a sow, would gobble up anything, including dog food.

"He wasn't picky. He ate everything. When he grabbed sardines, which we use as bait, we would tell him 'no Chancha!' But he would say with his husky voice: 'Yes, you have to try everything," his boss Bellardino Rodriguez said in an interview.

"We think that saved him," Rodriguez said as fishermen rested on hammocks under huts on the shore of the lagoon lined with small, single-engine vessels.

Alvarenga, a 37-year-old native of El Salvador, claims he survived more than a year lost in the Pacific after leaving Chocohuital on a fishing expedition aboard a seven-meter (24-foot) fiberglass boat in late 2012.

Alvarenga says he endured the 8,000-mile journey -- which ended in the Marshall Islands last Thursday -- by eating raw birds and fish as well as drinking turtle blood, his own urine and rainwater.

But Alvarenga has told AFP that his companion, Ezequiel, starved to death after four months because he could not stomach the raw diet and that he had to push his body overboard.

The victim's family, which lives in the village of El Fortin, said in an interview that he was a healthy 24-year-old man and that they were surprised he was unable to eat. Alvarenga said he believed the man was a teenager.

"I think that when you're out there, you want to survive. I can't believe that he refused (to eat)," said his brother, Romeo Cordoba Rios.

Officials in the Marshall Islands said Alvarenga would depart the tiny Pacific nation on Friday for Hawaii, before traveling on to El Salvador or Mexico.

But Ezequiel's family wants Alvarenga to come explain what happened on what was supposed to be a one-day trip.

"The only thing we want is to know what was the last thing that he told this man and what he did with my brother's body," Cordoba Rios said, adding that his mother was "still crying for her son."

The family, however, does not want a criminal investigation against Alvarenga.

The family said Ezequiel decided at the last minute to join Alvarenga on the fishing trip.

But once out, they were apparently caught by powerful northern winds. Then their engine, their GPS system and their radio broke down.

In a final radio call, Rodriguez recalled, Alvarenga said: "The swells are more than four meters high. They're godawful!"

After the pair disappeared, fishermen say they searched for them for four days with the help of a government helicopter to no avail.

This past week, the fishermen were awestruck when they saw images of Alvarenga on their small television with a bushy beard and walking slowly.

He looked stocky despite his struggle to find food in the middle of the ocean, but Rodriguez said Alvarenga was a muscular man before his disappearance.

Experts say it is theoretically possible to survive such a journey, though many have a hard time believing his story.

But not his friends in Chocohuital.

Rodriguez said the boat seen in news footage belongs to the community, with the fishing cooperative's name and license number.

Fisherman Erick Manuel Velazquez said most in the village have contingency plans in case they get lost at sea, but that Alvarenga had the most unusual preparation.

"This man ate everything. He would even eat dog food," Velazquez said. "He would tell us: One day, I'll have to stay at sea."

"I have tried it, but because I was sick with asthma and when it was over, I stopped drinking it," Velazquez said.

Guillermina Morales, a woman who runs an eatery, doubted that Alvarenga, who moved to Mexico 15 years ago, had lost his head.

"If he was crazy, he wouldn't have survived. Here, he acted like an honorable and working man," she said. "He was also brave."