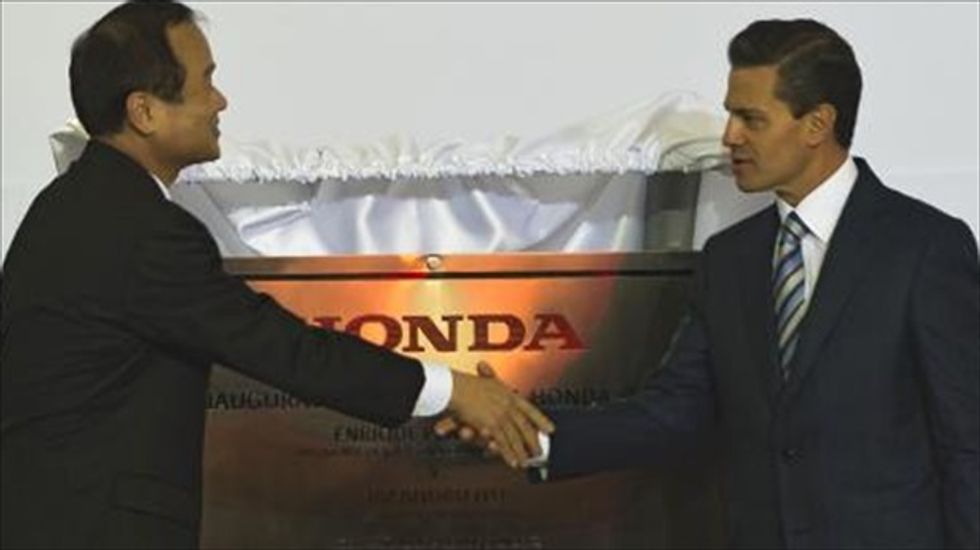 Honda unveiled a second factory in Mexico on Friday, seeking to capitalize on the nation's rising power in the sector and strengthen the Japanese car giant's foothold in North America.

The $800 million plant in Celaya, in the central state of Guanajuato, will churn out 200,000 units per year, contributing to Mexico's race to beat Canada and Japan as top car exporter to the United States.

For Honda, producing the Honda Fit hatchback and a yet-to-be-named compact-sport utility vehicle in Mexico will allow the company to expand its presence in the Mexican and U.S. markets.

Latin America's second-biggest economy has become an increasingly favored destination for car makers thanks to its lower wages, skilled workforce and participation in a raft of free-trade pacts.

"We have great expectations for growth in the US market as well as the Mexican market," Honda chief executive Takanobu Ito told reporters, adding that Mexico has good growth potential for small cars.

"In addition to having the North American Free Trade Agreement (NAFTA), Mexico has free-trade deals with several regions in the world, including Japan and Europe," he said through an interpreter.

Mexican President Enrique Pena Nieto was on hand to unveil the sprawling factory -- which will have 3,200 workers -- alongside state officials and Honda executives, including Ito.

Mexico is now the world's eighth-biggest car maker and the number four exporter after Germany, South Korea and Japan, according to industry figures.

"I am pleased to be here for the inauguration of this Honda factory, which recognizes that we are creating the optimal conditions to attract investments and to generate economic growth in our country," Pena Nieto said.

Ironically, the investments of Japanese car makers in Mexico is helping the Latin American country gain ground on Japan's auto exports to the United States.

Mexico is on pace to overtake Japan for second place this year, exporting 1.69 million units to its norther neighbor, almost 200,000 more than the Asian nation, according to IHS Automotive consultancy.

In 2015, Mexico will outpace Canada with 1.9 million units sold in the United States, IHS estimates.

IHS auto analyst Guido Vildozo said Honda's focus on Mexico -- where the firm is also building a $470-million transmissions plant at the same Celaya site, adding another 1,500 jobs -- was "a combination of things."

Honda opened its first factory in the western state of Jalisco in the 1980s to produce motorcycles and later cars.

"People forget that Mexican labor is highly qualified. Mexico has been building for competitive markets in the United States and Europe for years," Vildozo told AFP.

U.S., European and Asian auto-makers have also flocked to Mexico.

The new Honda plant is near a Mazda factory that began operations last month, attracting auto part makers that are turning Guanajuato into an industry hub.

Audi, the top-of-the-range company owned by German auto giant Volkswagen, is building a factory in the state of Puebla that will produce 150,000 cars per year when it opens in 2016.