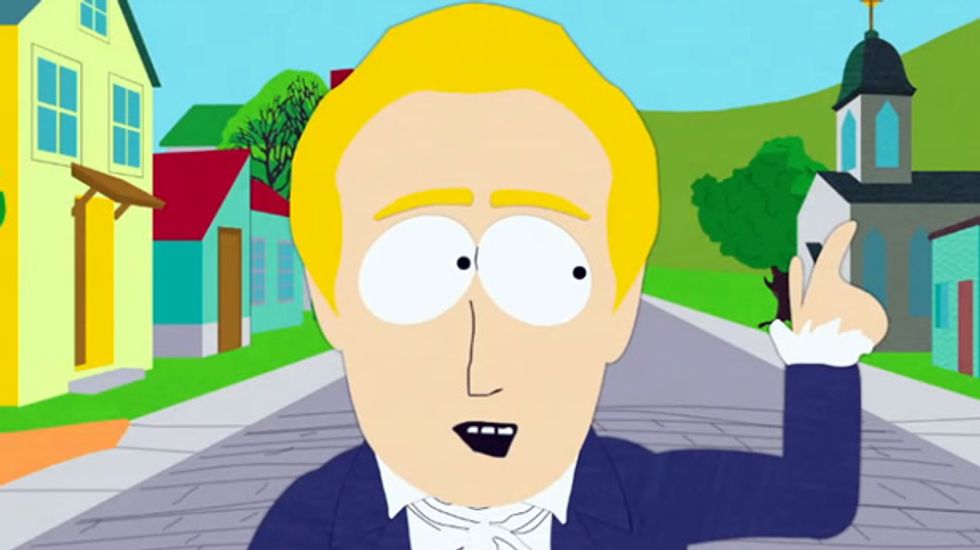 The Mormon Church officially responded to claims made in South Park creators Matt Stone and Trey Parker's Broadway musical The Book of Mormon, claiming that the "cartoonish image of [Mormon] people receiving their own planets" isn't how members of the Church of Jesus Christ of Latter-day Saints picture the afterlife.

"[S]criptural expressions of the deep peace and overwhelming joy of salvation are often reproduced in the well-known image of humans sitting on their own clouds and playing harps after death," the statement reads. "Latter-day Saints’ doctrine of exaltation is often similarly reduced in media to a cartoonish image of people receiving their own planets."

The "cartoonish image" in question comes largely from Comedy Central's South Park and its creators' Broadway musical, The Book of Mormon, in which the protagonist sings that he believes "that God lives on a planet called Kolob, Jesus has his own planet as well, God has a plan for all of us, [and] that plan involves me getting my own planet."

"Kolob" is mentioned in Mormon holy texts as being the planet closest to God, and was appropriated by Battlestar Galactica show-runner Glen Larson -- himself a Mormon -- as "Kobol," the original home of humanity.

"The Book of Abraham," purported to be Joseph Smith's translation of an ancient Egyptian text about the life of the Abraham, states that "thus there shall be the reckoning of the time of one planet above another, until thou come nigh unto Kolob, which ... is set nigh unto the throne of God, to govern all those planets which belong to the same border as that upon which thou standest."

The notion that there are multiple planets orbiting "the throne of God" works in concert with the Mormon belief in "exaltation" or "eternal progression," which states that individual Mormons can undergo a deification similar to that of Christ. As the fifth President of the Mormon Church, Lorenzo Snow, wrote: "As man now is, God once was; As God now is, man may be." Mormons will then, it is contended, be granted a planet of their own to govern in the manner that God and Christ govern Earth.

However, the Mormon Church insists that the reason non-members believe in Mormon planets is that "human conceptions of reality are necessarily limited in mortality, [so] religions struggle to adequately articulate their visions of eternal glory. As the Apostle Paul wrote, 'Eye hath not seen, nor ear heard, neither have entered into the heart of man, the things which God hath prepared for them that love him.'"

Because of these "limitations," it is "easy for images of salvation to become cartoonish when represented in popular culture."

Watch what the South Park episode "All About Mormons" below.