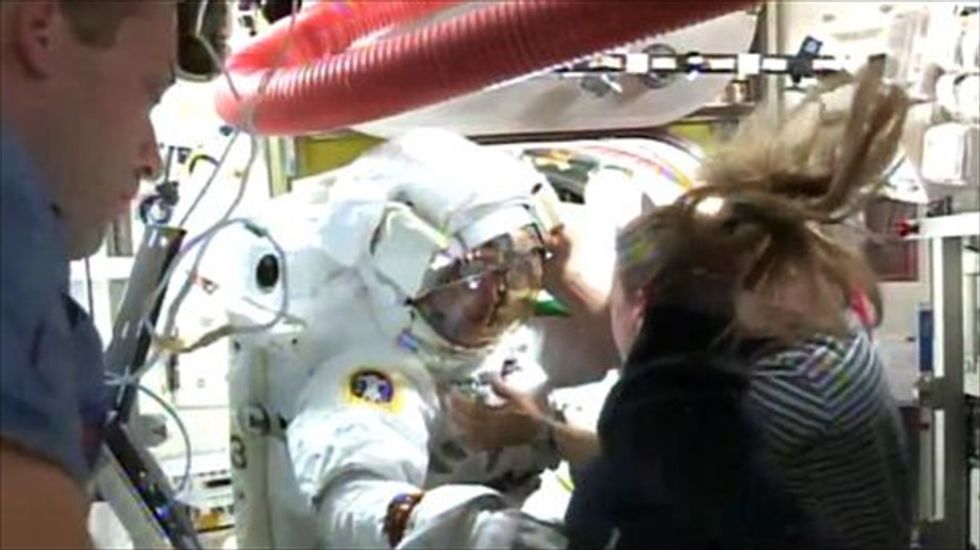 A U.S.-made space suit that leaked water into a helmet and threatened to drown a European astronaut had malfunctioned before, NASA admitted on Wednesday.

The flaw appeared during a spacewalk a week prior to the July 16 outing by Italian astronaut Luca Parmitano and an American, but U.S. space agency officials misdiagnosed it as a leaking drink bag.

That means the incident, which investigators described as among the most serious in the history of the US space program, was preventable, NASA said in its final report on the investigation into what went wrong.

"The space suit actually suffered the same failure at the end of EVA (extravehicular activity, or spacewalk) 22, performed a week earlier, and this event was not properly investigated, which could have prevented placing a crew member at risk a week later," said a summary of the report NASA released online.

The fault was attributed to "misdiagnosis of this suit failure when it initially occurred."

Parmitano's helmet began leaking water shortly after he began his spacewalk on July 16.

He first reported sensing liquid around his head 44 minutes into the spacewalk and was rushed back inside the International Space Station.

Parmitano was rattled but unhurt by the experience, which could have caused him to suffocate.

He had 1.5 liters of water in his helmet by the time he was rescued, NASA said.

At the time of the first leak, which happened to Parmitano a week earlier on his first-ever spacewalk and while he was wearing the same suit, NASA thought it was a problem with the drink bag, found inside the front of the space suit, and did not probe it further.

"The reason it was not properly investigated -- it wasn't an issue of anything being hidden or suppressed -- really the issue that there was a lack of understanding of the severity of the event," said Chris Hansen, chairman of the Mishap Investigation Board.

"It was believed that the drink bag caused this leak. Because of that, it really led the team to miss what ended up being the ultimate cause of the leak on EVA 23."

The fault in the space suit has been attributed to aluminum silicate contamination that clogged the fan pump separator, a system that helps regulate space suit temperature.

"That clog prevented water from flowing properly through the water separator and caused the water to back up and flow into the suit's air system," said Hansen.

But exactly how that contamination came to be is still unresolved.

"We didn't quite get to root cause as we would have liked," said Bill Gerstenmaier, NASA's associate administrator for human exploration, who added that work is ongoing to find out how and why the space suit hardware failed.

NASA has used the same basic space suit model for the past three decades, but has never before experienced this sort of flaw.

The space agency installed makeshift snorkels and absorbent pads inside the spacesuits for subsequent spacewalks that were done to make repairs outside the International Space Station in December.