NBA great Charles Barkley: The public is more homophobic 'than guys in the locker room' 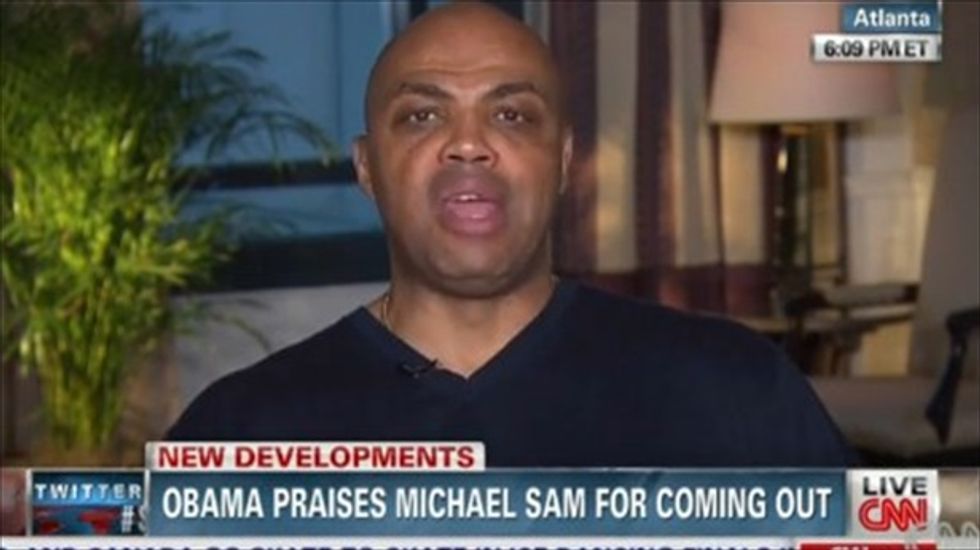 Pro basketball great Charles Barkley emphatically shot down the notion of homophobia in NBA circles in an interview with CNN host Wolf Blitzer on Monday, suggesting he had gay teammates during his career and saying his sport would be receptive to a player coming out publicly like pro football prospect Michael Sam.

"I think they would be safe with their teammates," Barkley said about openly gay NBA players. "I think the public at large is more homophobic than guys in the locker room. I think we as players get a bad rap."

Barkley pointed out that, before announcing his sexuality to the public on Feb. 9, Sam informed his University of Missouri teammates.

"He never had an issue," Barkley told Blitzer. "And none of those players outed him on Instagram, or Twitter, or any of that social crap."

Barkley -- now a broadcaster for TNT Sports -- mentioned both Sam and federal benefits for same-sex couples during an interview he conducted with President Barack Obama, which aired Sunday night before the NBA All-Star Game. On Monday, Barkley told Blitzer he brought the topics up for discussion in an effort to be inclusive.

"I'm against any form of discrimination -- I learned that from [Hall of Famer] Bill Russell," Barkley said. "As a Black player, we always want to be inclusive. And we've all played with gay players. We should not be discriminating against anybody. And I think it's an insult to gay people to think that they're going to be looking at teammates in a sexual way. That's an insult to all gay men."

There are currently no openly gay players in the NBA. Free agent center Jason Collins, who came out in April 2013, has not signed with a new team so far this season.

Watch Barkley's interview with Blitzer, as aired on CNN on Monday, below.