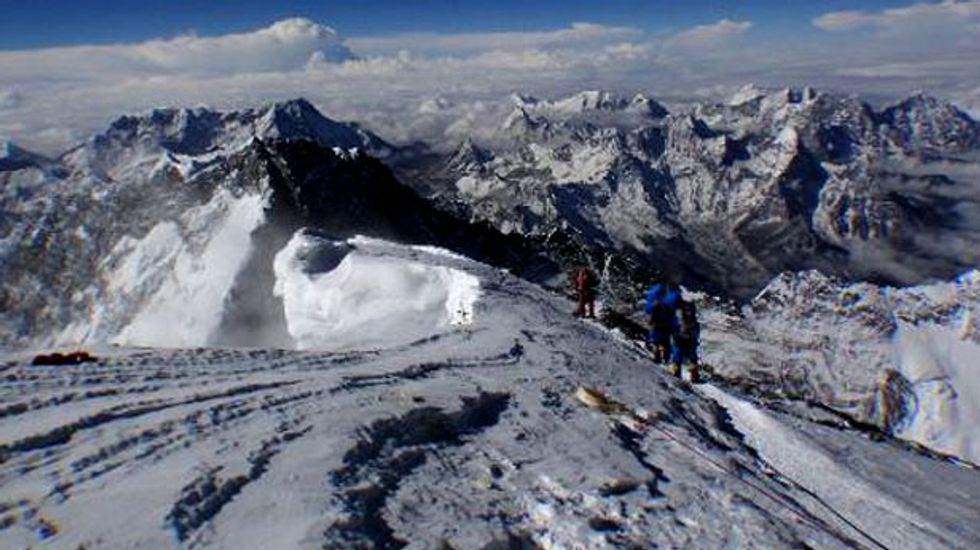 Unidentified mountaineers look out from the summit of Mount Everest (AFP)

Nepal will slash climbing fees for Everest and other Himalayan peaks to attract more mountaineers, despite existing concerns of overcrowding during the climbing season, a tourism ministry official said Friday.

The government will cut licence fees for foreign individuals trying to scale the world's highest peak from $25,000 to $11,000 from next year, Dipendra Paudel said.

However fees for group expeditions to Everest will go up, in a bid to discourage large numbers climbing together and to reduce tensions on the mountain during peak months, Paudel said.

Under existing rules, groups of seven climbers pay $70,000 in total, which officials say encourages climbers of varying abilities to club together. But under the new fees, a group of seven pays $77,000.

"The past rules led to a situation where a team had several members, not all of them equally competent," Paudel told AFP.

"We also realised that this often resulted in clashes among the mountaineers. This format also hampered the rescue efforts," he said.

"We hope the new measure would help increase the number of climbers (overall)," Paudel added.

Everest is a key revenue earner for the impoverished country, with hundreds scaling the mountain every year, but many in the climbing community warn of the dangers of over-commercialisation.

A brawl last year between three European climbers and Nepalese guides on Everest made global headlines, raising concerns of overcrowding during the climbing months from March to May.

Photographs showing queues of climbers waiting their turn to reach the 8,850-metre (29,035 feet) high summit, as well as gathering mounds of rubbish, have also highlighted the problems on the "roof of the world".

The rise in the number of group expeditions with climbers of varying abilities has also raised worries about the risk of accidents.

Under the new fees, individual climbers tackling other 8,000-metre peaks will be charged $1,800 instead of the existing $5,000.