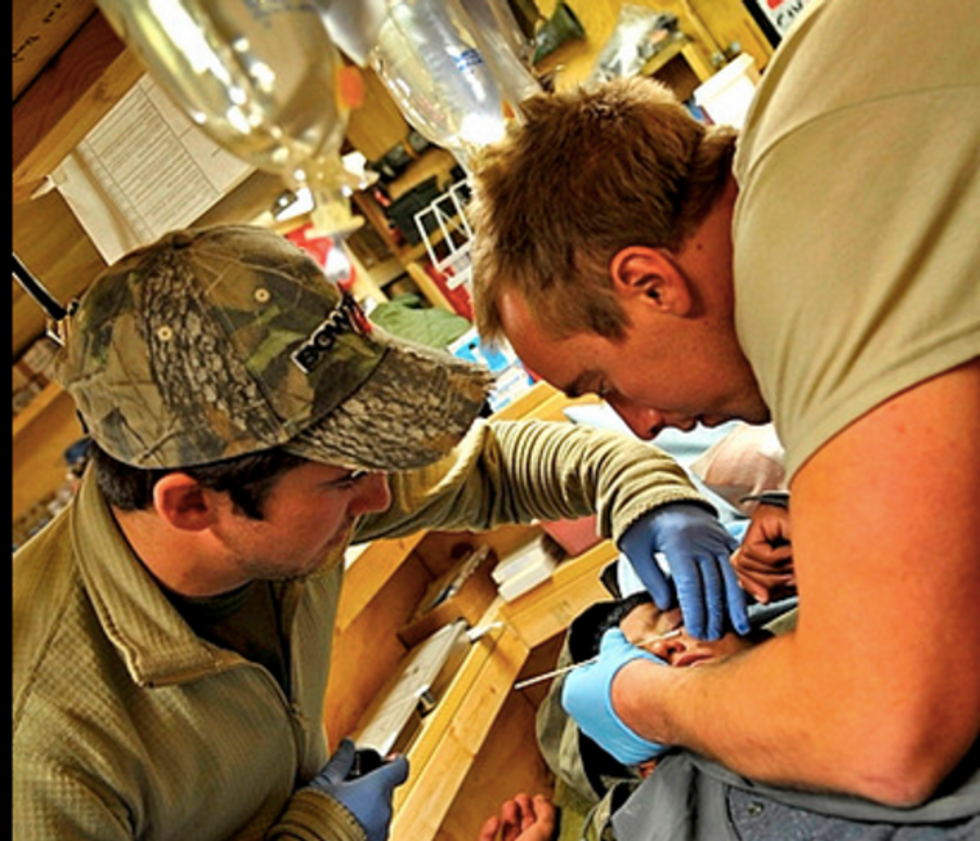 A group of military doctors, veterans, scientists and engineers have produced a new way of treating gunshot wounds in the field. According to Popular Science, the new device was partly inspired by "Fix-a-Flat," the flat tire-repairing foam sold at gas stations and garages for emergency tire repairs.

The hemorrhaging caused by gunshot wounds is a leading cause of death for soldiers in the battlefield. The current emergency treatment method is almost worse than getting shot. A medic must force gauze into the bullet wound to stop arterial bleeding, sometimes as far as five inches into the body. If this intervention fails to stop the bleeding within three minutes, the gauze must be torn out and fresh gauze inserted, an agonizing procedure to an already injured soldier.

The technique yields mixed results. Some wounds are simply too much for gauze alone.

"Gauze bandages just don't work for anything serious," Steinbaugh said. He treated injured soldiers in the field in Iraq and Afghanistan before retiring with a head injury.

Steinbaugh joined other combat medics, engineers, doctors and scientists at a startup named RevMedx, where they dedicated themselves to finding a new, more reliable way to stop bleeding. They needed something they could spray into a wound that would expand quickly like Fix-a-Flat, which rapidly expands to make a leaking tire airtight again.

"That’s what we pictured as the perfect solution: something you could spray in, it would expand, and bleeding stops,” Steinbaugh said. “But we found that blood pressure is so high, blood would wash the foam right out.”

The team started with regular sponges from a hardware store, which they cut into one centimeter cubes. The idea proved to be fortuitous. When sponges were injected into animal injuries, bleeding stopped.

Regular household sponges, however, weren't safe to inject into the body. The team worked with engineers to create sponges that are sterile, fast-expanding and compatible with human tissue. The resulting device is called XStat.

XStat looks like a large syringe full of pills, but the pill-shaped objects are in fact fast-expanding sponges that go from compressed to full expansion in 15 seconds. Each sponge is marked with an "X" that is visible on x-rays to keep them from being left behind in the body by surgeons.

The device is considerably smaller than the five bulky rolls of gauze each medic normally carries. RevMedx has submitted the XStat -- as well as a smaller version for narrower injuries such as shrapnel and small-caliber bullets -- to the FDA for approval. If the devices are approved, they could revolutionize battlefield trauma care and ultimately save lives in the civilian world as well.

RevMedx hopes to apply the sponge technology to the treatment of postpartum bleeding and to treat larger injuries such as those sustained by victims of land mines. Steinbaugh said that his experiences in combat are what drives him and the team.

“I spent the whole war on terror in the Middle East, so I know what a medic needs when someone has been shot, ” he told Popular Science. “I’ve treated lots of guys who would have benefitted from this product. That’s what drives me.”