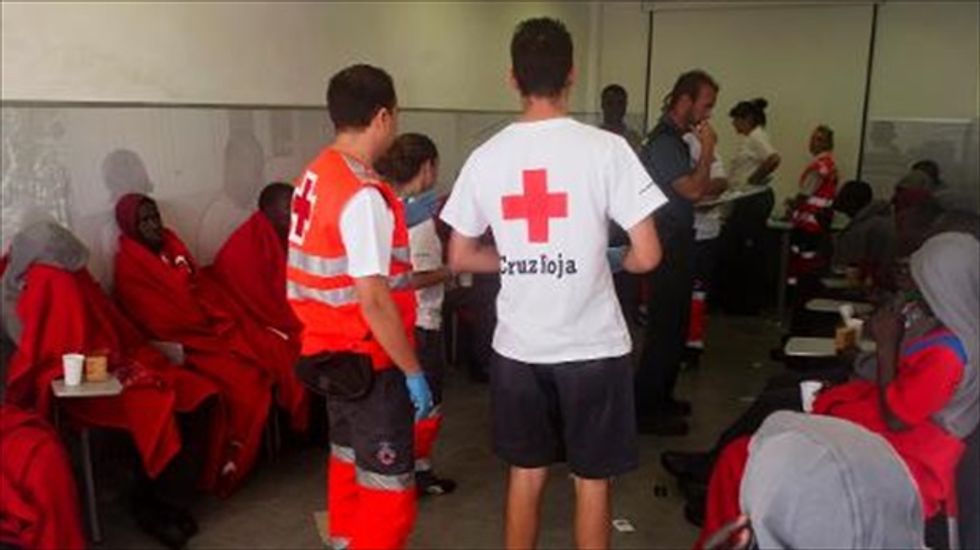 Members of the Red Cross tend to would-be immigrants as they rest at the Red Cross premises at Tarifa's harbour on Aug. 12, 2013 (AFP)

Nine sub-Saharan migrants, including a woman, drowned on Thursday while trying to swim to the Spanish enclave of Ceuta from a beach in neighbouring Morocco, an AFP photographer reported.

The deaths come as Morocco, under pressure from Spain, struggles to limit the rising tide of sub-Saharan Africans heading to its northern shores in a desperate quest to reach mainland Europe.

Hundreds of migrants headed out to sea from the Moroccan town of Fnideq at 6 am (0600 GMT) in a mass attempt to circumvent the six-metre (20-foot) barriers that mark the land border with the Ceuta enclave, Spanish and Moroccan officials said.

Moroccan police pulled the bodies of nine migrants, including a woman, from the waters near the Spanish border post, the photographer said.

Authorities in Fnideq said around 200 migrants attempted the crossing, while the authorities in Ceuta said around 400 had taken part in the desperate bid to reach EU territory, braving the strong currents of the Strait of Gibraltar.

Moroccan coastguard vessels picked up 150 of the migrants, while the rest turned back to shore, the official MAP news agency reported.

The head of a rights group in the region, Mohamed Benaissa, said many of the migrants were from Cameroon.

Officials in Ceuta said that before heading to the beach, they clashed with police as they tried to enter the Spanish territory via a bridge used to transport goods.

"The immigrants adopted a very aggressive violent attitude, throwing rocks and other objects at the Moroccan and Spanish security forces," said a spokesman for the authorities in Ceuta.

The Spanish police managed to drive them away using anti-riot gear, including rubber bullets.

"This drama shows once again the risks taken by illegal migrants, who put their lives in danger," the authorities in Fnideq said.

Ceuta is the northernmost point on the coast of northwest Africa and lies just 15 kilometres (9 miles) across the strait from the Spanish mainland.

Along with Spain's other north African enclave Melilla, it has the European Union's only land borders in Africa.

They are both seen as stepping stones to a better life in Europe for sub-Saharan migrants, who often risk their lives attempting to enter the tiny Spanish enclaves, either by sea or by storming the barriers separating them from Morocco.

On Sunday, the bodies of five presumed migrants thought to have been trying to reach Spain in an inflatable boat were found in the Nador area of Morocco's Mediterranean coast, near Melilla.

According to the Rif Human Rights Association, more than 40 migrants died trying to reach Ceuta or Melilla from Morocco over the past two years.

Many more attempt the perilous journey across the Strait of Gibraltar, often in overloaded makeshift boats.

Spain is just one of the southern European countries facing a mounting influx of African migrants and asylum-seekers.

Earlier this week, Italy said the number of asylum-seekers landing on its shores rose tenfold in January, compared with the same month last year.

Rome launched a military and humanitarian response last October, after hundreds of migrants drowned in two shipwreck tragedies near the Italian island of Lampedusa.

The authorities in Tangiers, Morocco's main northern city, also said they were beefing up surveillance along the coast, where they claim to intercept scores of migrants trying to reach Europe each week.

Morocco estimates there are around 30,000 illegal immigrants on its soil, most of them from sub-Saharan Africa.

In early January, the government launched an operation to regularise their situation and grant them residency permits, in the face of allegations that several migrants had died at the hands of police in 2013.