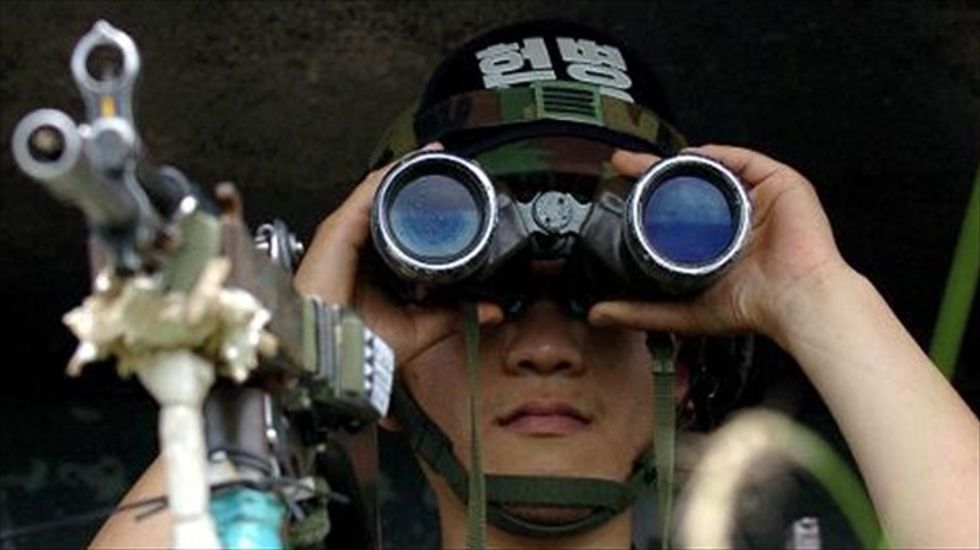 A South Korean soldier keeps vigil at an observation point in Paju, on the southern side of the demilitarized zone (DMZ) [AFP]

North Korea threatened on Thursday to renege on an agreement to hold a reunion for families divided by the Korean War unless South Korea scraps planned military drills with the United States.

The threat came barely a day after the two sides set dates for the reunion. It drew a sharp rebuke from Seoul, which warned Pyongyang against dashing the hopes of separated family members in the North and South.

In a statement broadcast on state television, the North's top military body, the National Defence Commission (NDC), said it was "outrageous" for South Korea to push ahead with the joint military exercises when cross-border efforts were being made for reconciliation.

"Dialogue and exercises of war of aggression... cannot go hand in hand," the NDC said.

The annual South-US joint drills are scheduled to begin late February, despite the North's repeated demands for their cancellation.

The dates agreed Wednesday for the family reunions were February 20-25, which would likely see them overlap with the start of the military exercises.

It would be the first reunion event in more than three years, and the accord was hailed as a possible harbinger of warmer ties between the arch rivals.

But Thursday's NDC statement appeared to back up those who had warned that Pyongyang would use the reunion agreement as a bargaining chip to extract concessions from Seoul.

The South Korean government issued a statement condemning the North's stance, and stressing there could be no linkage between the reunion and the drills.

"North Korea should not repeat its behaviour of hurting the elderly separated families who have waited for the reunions for more than 60 years," the statement said.

"We make it clear that it is imperative for North Korea to fullfil the agreement on family reunions this time," it added.

A reunion planned for September last year was cancelled by the North at the last minute.

"It's our position that an agreement must be honoured under any circumstances," the South's Unification Minister Ryoo Kihl-Jae told reporters.

The NDC voiced particular outrage over what it said were US B-52 bombers "carrying out nuclear strike drills" off the Korean peninsula on Wednesday as the talks on the reunions were being held.

The US Pacific Command responded by saying it had maintained a "rotational strategic bomber presence" in the region for more than a decade.

Seoul and Washington have both made it clear that there is no question of the upcoming joint military drills being called off, no matter what pressure North Korea chooses to exert.

As well as the joint drills, the NDC also condemned "slanderous" attacks in the South Korean media, with special reference to reports of North Korean leader Kim Jong-Un's recent visit to an orphanage.

A picture of Kim wearing shoes while interacting with the orphans in their dormitory was pilloried in the South. The leading conservative South Korean daily, the Chosun Ilbo, said it displayed an "unimaginable" lack of manners.

Koreans never wear outdoor shoes inside the home -- especially not in living areas.

"We cannot but reconsider the implementation of an agreement that was already reached as long as there is a continued move to hurt the dignity of our supreme leadership and slander our system," said the NDC statement.

The South Korean government stressed that it had done nothing to slander the North, and dismissed the complaint as an unworkable demand to muzzle the domestic press.

The annual South-US drills, which Pyongyang routinely condemns as rehearsals for invasion, are always a diplomatic flashpoint on the Korean peninsula.