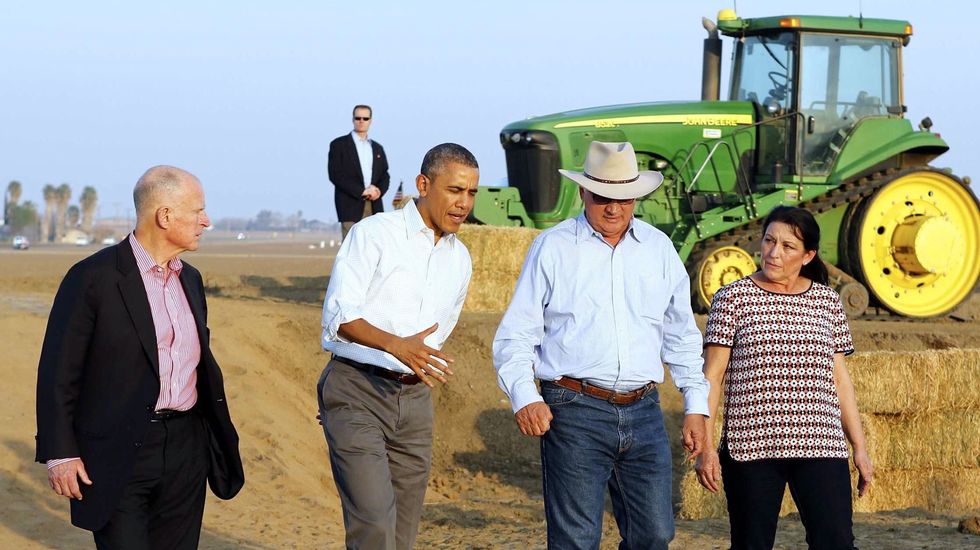 President Barack Obama toured parts of California's drought zone on Friday and pledged to speed help to the No. 1 farm state, but he said harsh weather in the United States will get worse until more steps are taken to address climate change.

California is coming off its driest year on record and a recent winter storm did little to dull the impact of the drought in the state that produces half the country's fruits and vegetables. A recent drought monitor said 91.6 percent of the state is experiencing severe to exceptional drought.

Obama walked past a below-normal canal in a dusty field that would otherwise be producing asparagus and organic melons. In remarks after the tour and during an earlier roundtable, the message was sober: California, usually bountiful, is facing a challenging year.

"Anybody in this state can tell you California is living through some of its driest years in a century," he said, standing with Governor Jerry Brown.

Since California is the biggest U.S. agricultural producer, he said, "What happens here matters to every working American right down to the cost of food you put on your table."

Obama announced plans to make available within 60 days up to $100 million in aid to help California farmers who lost livestock because of drought conditions. For livestock producers across the country, about $1 billion will be available.

The assistance was contained in a $956 billion farm bill that Congress passed and that he signed last week. Separately, the administration said it plans new funding to address climate change.

At a meeting of the state's top water officials in Sacramento on Friday the mood was grim, despite the welcome news that federal aid was on the way.

Water resources secretary John Laird called the drought a catastrophe that had not been mitigated by recent rains in the state.

Job losses among farm workers were expected to be so acute that $60 million of the federal assistance was expected to be used to shore up food banks.

"This is a disaster that crosses over into employment and food," he said.

Laird said the state was moving quickly to help the communities most affected by the dry conditions, sending low-security prison inmates to lay pipe in the parched town of Willits to improve access to water.

"We can't make it rain, but we're sending water where we need it the most, saving what we can and asking everyone to conserve," Laird said.

Obama said the federal government will help California as it adjusts policies to conserve more water. But he said it will take a lasting effort over the long haul to combat carbon emissions blamed for global warming.

"We have to be clear: a changing climate means that weather-related disasters like droughts, wildfires, storms, floods are potentially going to be costlier and they're going to be harsher," he said.

Droughts have existed for eons, he said, "but scientific evidence shows that a changing climate is going to make them more intense... Unless and until we do more to combat carbon pollution that causes climate change, this trend is going to get worse."

Given congressional gridlock over the issue, Obama might be building a case to impose some measures this year against climate change via executive order, part of an effort to take action where he can with or without congressional approval.

Beyond California's drought, Obama's 2015 budget proposal, expected in March, will include $1 billion to help communities prepare for climate change, the White House said.

The so-called Climate Resilience Fund will pay for research on climate change and fund technologies and infrastructure to blunt its impact.

Obama stopped in the drought zone on his way to California to meet Jordan's King Abdullah on Friday night at Sunnylands, a desert retreat in Rancho Mirage.

Among other measures, Obama said he directed federal facilities in California to take steps to curb water use immediately, including a moratorium on new landscaping projects not deemed essential.