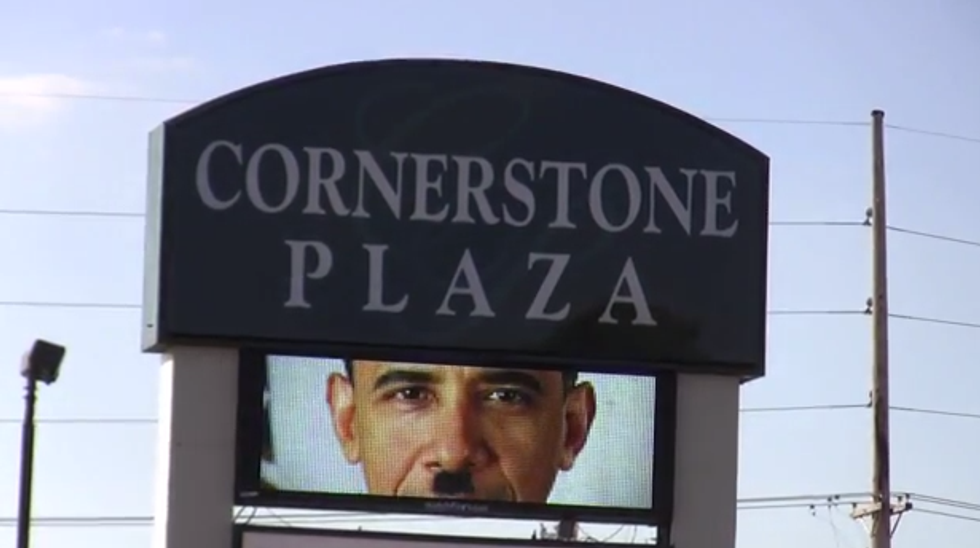 A Kansas 'tea party' Republican who is running a primary campaign against incumbent GOP Sen. Pat Roberts, and who is a distant cousin of President Barack Obama, has compared the president to Adolf Hitler and a "less despotic" Benito Mussolini.

According to Mother Jones, Milton Wolf, who claims to share an ancestor, Thomas Creekmore McCurry—Obama's great-great-grandfather and Wolf’s great-grandfather with the president,  has a history of comparing Obama and his party to Adolf Hitler and the Nazis.

Wolf, who claims that incumbent Republican Sen. Pat Roberts isn't conservative enough, is an underdog in the primary contest against the sitting senator, but he does have the backing of the influential Senate Conservatives Fund  political action committee..

Speaking of the Affordable Care Act, Wolf agreed with former Vice Presidential candidate Sarah Palin's unfounded assertion that there is a secret provision within the act which would impose end-of-life decisions on senior citizens.

"Promises from the White House notwithstanding, Mrs. Palin indeed was right," Wolf wrote in 2010. "Death panels are all too real, and no family deserves to be caught up in them. Granted, some may find the term 'death panel' unnecessarily provocative, but then again, what exactly should we call a panel whose decisions result in death?"

In a column he wrote for the Washington Times in 2011 he wrote, "America rejected Mussolini's brand of corporatism in the 20th century, and we should reject Mr. Obama's less despotic brand in the 21st."

The Kansas radiologist has parlayed his family connections to the president into an appearance on Fox News' morning show, Fox and Friends, where he discussed his opposition to the Affordable Care Act. This has landed Wolf  a series of  speaking engagements  throughout the country, a column in the right-leaning Washington Times, and an e-book: First, Do No Harm: The President's Cousin Explains Why His Hippocratic Oath Requires Him to Oppose ObamaCare.