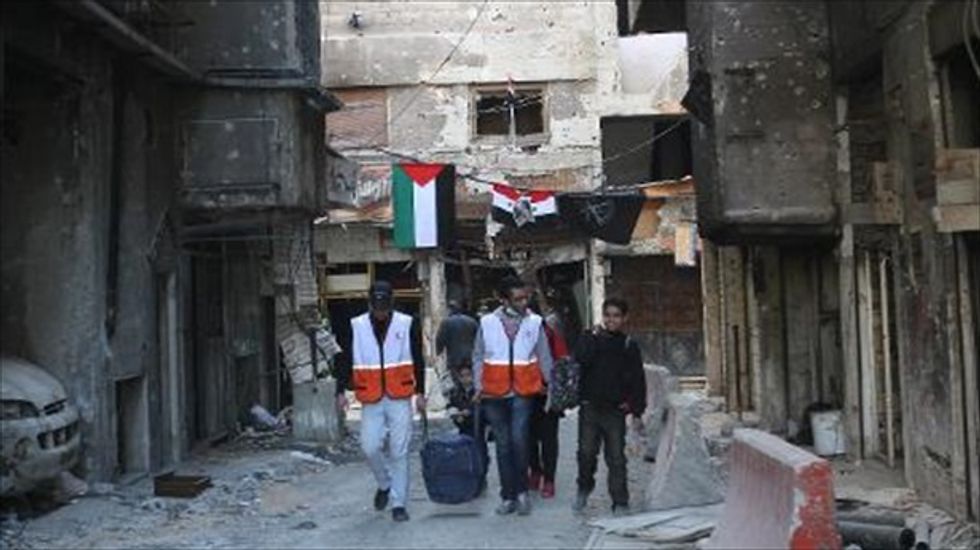 Khulud Shehab's withered hands push two of her children out of Yarmuk in southern Damascus, anxious to flee the hell and hunger of the Palestinian refugee camp as fast as possible.

For seven months, the Syrian army has imposed a punishing siege on the camp to try to force out rebels holed up inside.

Khulud and her family are among the lucky few to be allowed to leave, after a deal was struck following months of negotiations between Syrian authorities and Palestinian factions in Yarmuk.

"Just look at them. You can imagine what it's like inside," Khulud tells an AFP journalist, displaying her cracked hands.

"It's disastrous. People are literally dying of hunger," says the slight and dark-eyed mother.

"We were boiling herbs and bits of cactus we found in the fields near our house," to eat and survive, she adds.

Amid the crush of leaving Yarmuk, Khulud has lost track of her husband and one of her daughters as the family negotiated streets strewn with the rubble of buildings destroyed in months of fierce fighting.

The camp began as a home for Palestinian refugees in the 1950s, but Yarmuk evolved over the decades into a bustling residential and commercial district, home to some 150,000 Palestinians as well as Syrians.

It became a war zone when rebels who took up arms against President Bashar al-Assad moved in and won the support of some Palestinian groups in the fight against regime forces.

The violence forced tens of thousands of residents to flee but an estimated 18,000 remained trapped inside Yarmuk after the army imposed a total blockade on the camp last June.

The Syrian Observatory for Human Rights, a monitoring group based in Britain, says at least 88 people have died from hunger or lack of medical care since the blockade began.

After months of negotiations a deal was reached in late December between a committee of local rebels and 14 Palestinian factions inside Yarmuk to allow long-denied food into the camp.

Despite some false starts, aid began entering Yarmuk in January and some of the trapped residents were allowed to leave for humanitarian reasons.

"Seeing the road open like this is the best thing that has happened to me in a long time," says Khulud.

"I'm overjoyed to be able to leave, and I hope that the others will be able to follow."

The UN agency for Palestinian refugees, UNRWA, first distributed aid in the camp on January 18 and then again from Thursday to Sunday.

"Letting civilians leave eases the suffering of residents," he tells AFP, hoping that more will follow.

Umm Alaa, five children in tow, is among those overwhelmed with relief.

"I don't know where I'm going to go, but I absolutely wanted to get out, even if I had to sleep in the street," she says.

Her first priority was to get to the paediatric hospital in Damascus's Mazzeh district to seek treatment for a son suffering from acute malnutrition and who has developed muscular dystrophy.

Sheikh Mohamed al-Omari, head of the reconciliation committee that arranged the December deal, says only humanitarian cases were able to leave.

Palestinians already outside the camp had to submit a request to the committee on behalf of their relatives trapped inside.

"We contact a doctor in the camp who can judge which cases are most urgent," Omari says.

Gunshots ring out as Umm Alaa, Khulud and others leave Yarmuk and Palestinian Red Crescent (PRC) ambulances enter to evacuate those too ill to walk.

At the Batikha roundabout, 15 Red Crescent volunteers hand out sesame seed biscuits and water to those staggering out of Yarmuk and write down their names.

PRC doctor Atef Ibrahim says that all of those who are ill will be transferred to Jaffa hospital in Mazzeh, adding that most are children suffering from dehydration, pregnant woman and diabetics.

Outside Yarmuk a huddle of relatives stands waiting for loved ones.

Among them is Afaf Shehabi, looking out for her daughter Aala al-Aidi and her grandson aged two.

Aala and the child walk out alone. She is now a widow, her husband killed by shellfire.

A top election official in Texas who was briefly a part of Donald Trump's effort to overturn the 2020 election resigned this Monday, The Guardian reports.

Despite being part of Trump's legal team, Secretary of State John Scott later said that he believes Joe Biden was the legitimate winner in 2020.

Jen Fifield, Votebeat
Arizona officials certified the state’s midterm election results Monday after a tumultuous month of challenges to the certification process that was reminiscent of 2020 and potentially set the stage for 2024.

The certification is a milestone given the GOP’s pressure campaign demanding the election results be thrown out. But it in no way ends all possible fights over who won. Rather, it kicks off the five-day period in which lawsuits challenging the results can be filed in court and a long timeline for three statewide recounts, which are expected to stretch to the end of the month.

Secretary of State Katie Hobbs, a Democrat who was elected governor, signed off on the results at Monday’s ceremony, with the governor, attorney general, and chief justice of the Arizona Supreme Court as witnesses, as required by state law. The ceremony was closed to the public, as in 2020, mostly for security reasons, according to a Hobbs spokesperson. Before signing, Hobbs called the election transparent, accurate, and fair.