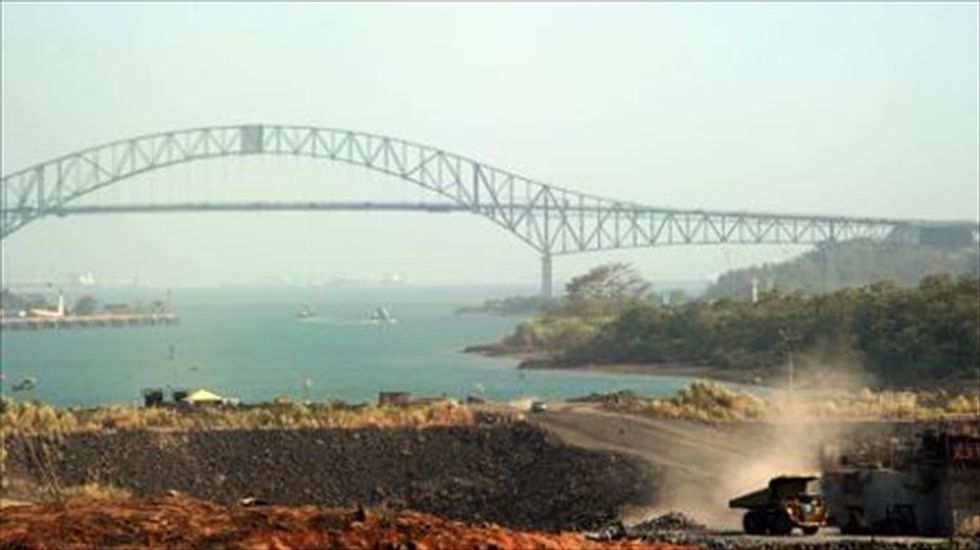 A row over $1.6 billion in cost overruns on construction to widen the Panama Canal has been resolved, the parties said Friday, ensuring completion of the massive project.

"The plan here is that we would enter into commercial operations in January 2016," said Jorge Quijano, the canal administrator. Under the original schedule, the canal expansion was supposed to have been ready this year.

The agreement offers co-financing of the construction, while awaiting the result of arbitration to assign final responsibility for the cost overruns, the consortium said.

In their deal, both sides agreed to make an immediate payment of 100 million dollars to the project, a cash infusion that will permit "the normal rhythm of work" to resume, the canal authority said.

The accord also extends until 2018 a moratorium on payment of a $784 million loan which the canal authority had advanced to GUPC.

Paperwork was being drawn up for the agreement and was to be signed "shortly," the parties said in a statement said.

"GUPC expects the prompt conclusion of the agreement and the financing with the aim of executing the works and completing the project efficiently," it said.

Quijano said the agreement was not perfect, but "it has the advantage that we can resume work rapidly and with the injection (of funds) we could be talking about completion of the projection in 2015."

The construction to add wider locks and channels capable of handling much larger container ships is one of the world's most ambitious civil engineering projects.

But in early February, a financial row led to a complete two-week suspension of the project by GUPC, which includes Sacyr, Italy's Salini Impregilo, Belgium's Jan De Nul and Constructora Urbana of Panama.

Work resumed on the massive construction project on February 20, and completion on the project is now assured following Friday's deal.

Relief over the agreement was palpable on both continents Friday.

"This puts an end to the existing differences after negotiations that led to the result we all hoped for: the completion of a great work within the deadline," said Antonio Tajani, the European Union's Commissioner for Industry and Entrepreneurship.

"This agreement is important for the world economy, for Panama, for Europe, for countries around the world and for the reputation of all parties involved," he said.

Likewise, Quijano hailed the accord as one which "protects the interests of the Panama Canal within the terms of the contract, and respecting our mutual positions," he said.

GUPC had been in dispute with the canal authority in part over geological difficulties which obliged the builders to spend much more on cement than expected.

GUPC said it based its estimates on incorrect data provided by the Canal Authority.

In 1999, ownership of the canal reverted from the United States to Panama.

The project to add a third set of locks to the canal ad originally been due to be completed next year.

But the project was running nine months late at the end of 2013, and has slowed further this year.