Pope Francis: Couples getting divorced should be 'accompanied' -- not 'condemned' 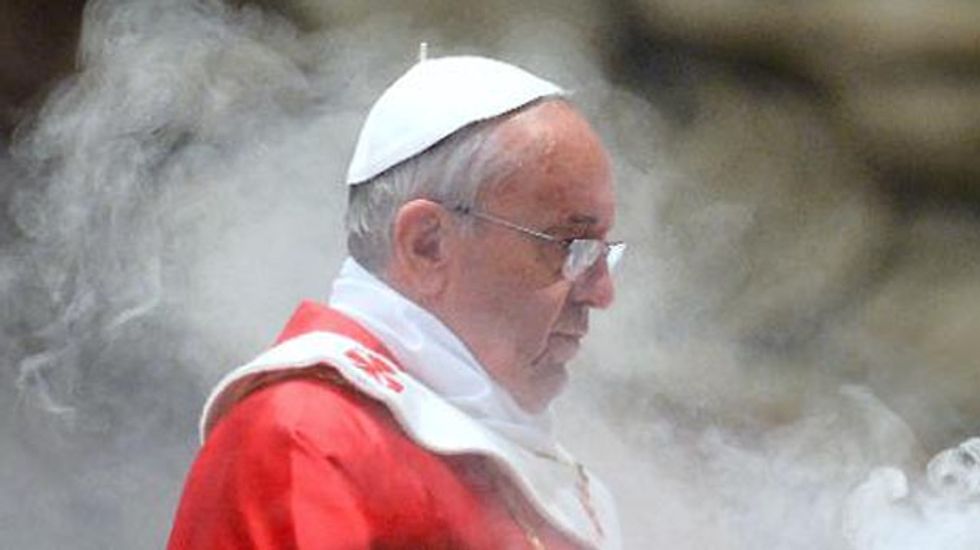 Pope Francis on Friday said couples whose marriages fail should be "accompanied" and not "condemned", wading into a debate on divorce that is testing his promise to put the Church in touch with modern life.

"When love fails, and it fails many times, we have to feel the pain of that failure, accompany the people who have felt the failure of their love," the pope said during the daily mass he holds in the Vatican.

"Don't condemn them! Walk with them!" he said, adding: "We have to be so close to the brothers and sisters who have suffered the failure of love in their lives".

The main issue is whether divorcees who re-marry should be allowed to take part in the most sacred point of Catholic mass, Holy Communion, which is forbidden under current rules that in practice are often not observed.

Changing that doctrine could in turn alter Church rules on marriage annulments and raise broader questions about the institution of marriage, prompting lively exchanges between traditionalists and reformers.

Cardinal Philippe Barbarin, the archbishop of Lyon in France, told Vatican radio that a meeting of cardinals from around the world in the Vatican this month devoted "80 to 90 percent" of the time to discussing the issue.

German Cardinal Ludwig Mueller, head of the Church's doctrinal watchdog, the Congregation for the Doctrine of the Faith, has said the current rules are "impossible to change" and that people should stop thinking of marriage as "a party in a church".

Honduran Cardinal Oscar Andres Rodriguez Maradiaga, a member of the council of eight cardinals established by the pope to advise him, has taken a more lenient line and has asked Mueller to be "more flexible".

A survey by the Spanish-language network Univision in 12 mainly Catholic countries found that 75 percent of Europeans, 67 percent of Latin Americans and 59 percent of Americans were at odds with the Church on the issue, while in Africa 19 percent of respondents disagreed.

The issue is one of very personal anguish for many Catholic couples, who say they are being treated as second-class believers, and has led to acts of defiance.

The German diocese of Freiburg im Breisgau last year said it was authorizing re-married divorcees to receive Holy Communion on a case by case basis -- prompting a quick rebuke from the Vatican.

The issue would affect millions of Catholics around the world, with around a quarter of Catholic marriages ending in divorce in the United States alone.

Some theologians and clergymen have called for changes to facilitate the annulment of marriages in cases in which it could be argued that the wedding took place under social pressure or was not fully understood.

Re-marrying would then be allowed under Church rules and the couple would be allowed to take Holy Communion.

Another possibility could be the Orthodox model, which allows some divorcees to re-marry in church and take Holy Communion but gives only a blessing for the second marriage and does not consider it a sacrament.

Francis mentioned the Orthodox solution as a "parenthesis" on the plane during his return from a visit to Brazil and it was raised again by some cardinals in their consistory this month in which they said it could happen following "a period of penitence".

The issue is likely to dominate a synod of world bishops planned for later this year and another one in 2015, which Francis has said should focus on families.

The divorce debate was raised in an unprecedented questionnaire sent out to dioceses worldwide to find out the approach taken by parishes on many issues, including same-sex couples and pre-marital cohabitation.

Vatican expert Henri Tincq, writing on the website Slate.fr, said the divorce issue is particularly complex on a theological level since "a sacrament is given by God and can never be taken back".