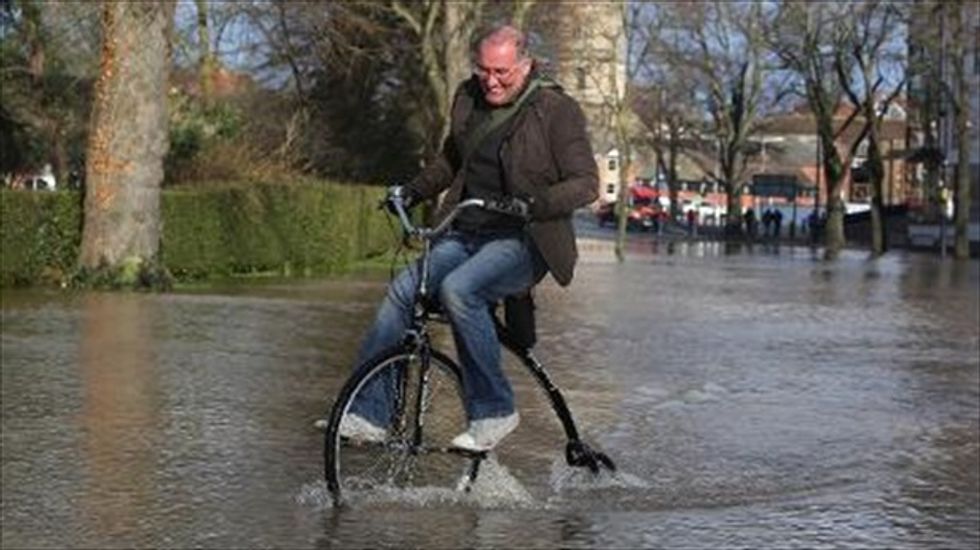 A man rides an old fashioned penny-farthing bicycle through floodwater in the town of Worcester, on Feb. 13, 2014 [AFP]

Britain's Princes William and Harry pitched in to help flood victims on Friday as a new winter storm barrelled into the country, causing fresh misery after the wettest start to the year for 250 years.

The princes joined soldiers distributing sandbags to protect properties in the flood-hit village of Datchet, near London, in the shadow of Queen Elizabeth II's Windsor Castle residence.

The Met Office said a "multi-pronged attack" of wind, rain and snow was sweeping across the country after making landfall in southwest England with winds of nearly 80 mph (128 kph).

It said up to 40 mm (1.6 ins) of rain could fall and warned of more huge waves and a tidal surge on the south coast of England, where earlier storms wiped out a railway line and damaged historic cliff features.

The country's embattled Environment Agency meanwhile warned that the flood risk would continue for at least another week.

Around 16,000 people remain without power following an earlier storm on Wednesday when hurricane-force gales left one person dead.

Prime Minister David Cameron reiterated his promise to do "whatever it takes" to help stricken communities, following criticism of the government's initial response to the crisis.

"Obviously, we are facing a very difficult time because we have got the wettest start to the year for 250 years and these are extraordinary weather events, but we are fighting on every front to help people," he told ITV television.

More than 2,000 army, navy and air force personnel have now been deployed across Britain to help flood-hit communities.

In the Thames-side village of Datchet, second-in-line to the throne Prince William and his younger brother Harry donned Wellington boots and waterproofs as they lugged sandbags alongside members of the Household Cavalry.

"The Duke and Prince Harry wanted to show their support to the flood victims and thought the most appropriate way of doing that was through the armed forces relief effort," a Kensington Palace spokeswoman told AFP.

Buckingham Palace meanwhile said the queen was helping farmers in the southwestern county of Somerset -- parts of which have been underwater for nearly two months -- by contributing feed and bedding from the royal farms at Windsor.

A total of 22 severe flood alerts indicating a risk to life are in place across Britain: 15 in Berkshire and Surrey to the west of London, six in the southwest and one in central England.

More than 5,800 properties have been flooded since early December while huge swathes of farmland have been inundated.

The swollen Thames was expected to reach its highest level for 60 years at the weekend.

Floodwaters were also rising in the cathedral city of Winchester and market town of Romsey in southern England, although waters that threatened the historic city of Worcester in central England receded slightly.

Wildlife was also at risk. Badgers could also suffer from the flooding, particularly in parts of the southwest where a government-sanctioned cull got underway last year, an animal charity warned.

Cameron has said he will seek financial aid from the European Union to cope with the floods, despite his promises to renegotiate London's relationship with Brussels and hold an in-out referendum.

His government has faced criticism for being slow to help people in flood-hit areas.

The military says 1,600 soldiers had been deployed with 2,000 in total available.

Train operator Network Rail said teams armed with chainsaws and pumps were on stand-by to deal with the storm forecast on Friday.

Britain also faces an economic battering after Bank of England governor Mark Carney said the fragile recovery from recession would be affected as the bad weather hits farming and transport.

Cameron has said that money is "no object" in the relief effort, and that grants of up to £5,000 would be available to affected businesses and homeowners.