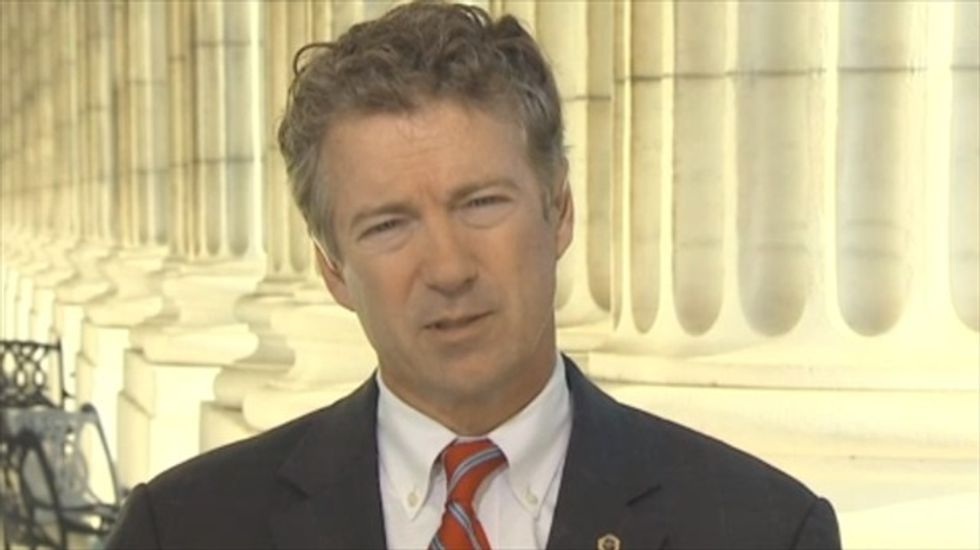 U.S. Sen. Rand Paul (R-KY) filed suit Wednesday against President Barack Obama and other officials in a bid to end the secret program that scoops up telephone data on virtually all Americans.

The libertarian-leaning Paul, a potential 2016 presidential contender, said he and a prominent Tea Party group filed their "historic" civil action on behalf of "everyone in America that has a phone," in what he described as potentially the largest class-action lawsuit of its kind.

"There is a huge and growing swell of protest in the country of people who are outraged that their records would be taken without suspicion, without a judge's warrant and without individualization," Paul, holding up a mobile phone in each hand, told reporters outside the US District Court in Washington.

The suit alleges that the National Security Agency is violating the Fourth Amendment of the Constitution by collecting so-called metadata on hundreds of millions of people.

They expect to take their fight all the way to the U.S. Supreme Court.

The president called for reforms to the controversial and secret program authorized under Section 215 of the Patriot Act, which came to light last year through a series of stunning leaks by former intelligence contractor Edward Snowden, who has been provided asylum in Russia.

But Paul insisted Obama has refused to stop "a clear and continuing violation of the Fourth Amendment," which prohibits unreasonable searches and seizures.

Co-plaintiff Matt Kibbe, president of FreedomWorks, warned of a government that has overstepped its bounds to spy on nearly every American, regardless of the level of suspicion.

"This is about a government that's crossed a line," he said. "We want to put that genie back in the bottle."

Paul and Kibbe were joined in their case by Tea Party-backed politician Ken Cuccinelli, the former attorney general of Virginia who narrowly lost that state's governor's race in November.

Cuccinelli said he was optimistic that "when the Supreme Court finally rules on these questions, that Americans' Fourth Amendment rights will be vindicated and we will prevail."

Paul said he has collected more than 300,000 signatures from people eager to join the suit, which aims to stop the metadata program and purge the records it has collected.

In a statement responding to the lawsuit, the Justice Department said it remained "confident that the Section 215 telephone metadata program is legal, as at least 15 judges have previously found."