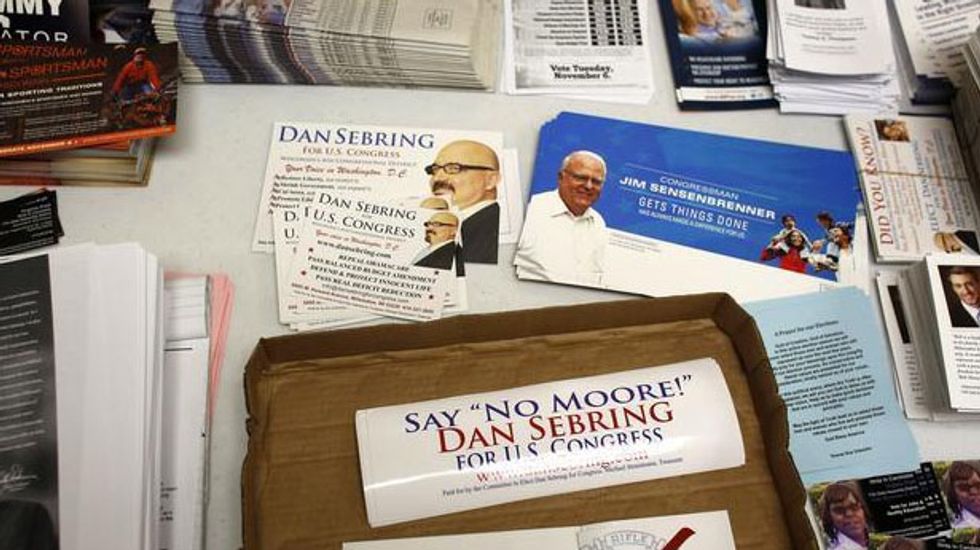 WASHINGTON (Reuters) - When Barack Obama defeated Mitt Romney in the 2012 U.S. presidential election, many political strategists saw it as a triumph of the Obama team's technological prowess, allowing it to identify likely Democratic voters and get them to the polls.

It was a sore point for Republicans, who came out of that election vowing to nullify the Democrats' advantage in gleaning information from voter databases and social media to find potential supporters.

More than a year later that still has not happened. According to interviews with a dozen strategists from both parties, Democrats appear set to maintain their technological edge, potentially boosting their prospects in the 2014 midterm elections just as other factors - such as President Obama's sliding popularity - are likely to favor Republicans.

It is not that the Republicans are not trying.

The Republican National Committee is spending "tens of millions of dollars," spokeswoman Kirsten Kukowski says, to "change the culture of our data and digital program" with new data analysis teams in Washington and Silicon Valley. Meanwhile, independent conservative groups funded by big-money donors such as the billionaire brothers Charles and David Koch continue to have their own digital teams, typically focused more on issues - such as opposing Obama's healthcare overhaul - than on individual candidates.

But in a reflection of some of the divisions between the Republican Party's most conservative members and its more moderate establishment, campaigns and other groups often do not share information about voters and tactics.

And even as party leaders are aggressively pursuing a new digital game plan, Republican strategists acknowledge that some conservative candidates and their supporters remain wary of changing tactics they have used for years, such as reaching voters through television ads and door-to-door campaigning without much help from analyses of voter databases.

Some Republicans' skepticism was fueled in 2012 by the embarrassing failure of the Romney campaign's ORCA project, a data system that was designed to help get conservative voters to the polls and improve communication between campaign offices. ORCA crashed on Election Day, potentially harming Republican turnout.

"There's a fundamental cultural problem" in how Republicans have dealt with technology in recent elections, said Vincent Harris, a Republican digital strategist who this year is helping candidates such as Senate Majority Leader Mitch McConnell of Kentucky.

"Democrats are still a couple (election) cycles ahead of us," Harris said.

The Democrats' digital advantage is fueled largely by tools developed by Obama's campaigns in 2008 and 2012 to identify likely Democratic voters, persuade them to vote and encourage their friends to do the same.

Using databases built from such information, digital teams can design and target ad campaigns and online outreach efforts through social media and emails to specific groups.

The Democrats' efforts are further boosted by a network of dozens of former Obama technology aides who have formed consulting companies that, while independent of one another and the party, share information and strategies with each other and with clients, including many campaigns.

Now, several of Obama's former digital and data staffers are turning their sights on 2014 races, some of which pose large hurdles for Democrats.

They include Teddy Goff, a former digital director for Obama's 2012 campaign. Goff's firm, Precision Strategies, has been hired by the campaign of Charlie Crist, the Republican-turned-Democrat and former Florida governor who is seeking to reclaim that job this fall in a battle against his successor, conservative Republican Rick Scott.

In Wisconsin, BlueLabs, which includes Obama 2012 data engineers Chris Wegrzyn and Daniel Porter, has gone to work for Mary Burke. She is the Democrat challenging conservative Republican Governor Scott Walker, who is seen by many Republicans as a potential presidential candidate.

It has signed on to help Democrat Wendy Davis' long-shot bid for Texas governor against Greg Abbott, the Republican attorney general in the mostly Republican state.

The 270 Strategies firm also is working for Ready for Hillary, the political action committee supporting a possible presidential run by former Secretary of State Hillary Clinton in 2016.

The Democratic digital and data teams are coy about discussing their tactics and strategies, but Republican digital specialists say they have seen enough of them to recognize a gulf between each side's capabilities.

Ned Ryun, founder of Republican campaign technology company Voter Gravity, pointed to the 2013 race for Virginia governor as an example of Republicans' struggles with voter data.

McAuliffe defeated conservative Republican Ken Cuccinelli in the politically divided state, a big win for Democrats at a time when Obama's administration was under fire for problems with the rollout of Obamacare.

"The Cuccinelli campaign was going door-to-door using paper and pen" while collecting voter data, Ryun said. "When I asked what happened to the data, their guy just shrugged his shoulders."

When campaigns do not retain or share data, Ryun said, it hurts candidates' ability to persuade voters, and information that a campaign obtains cannot be used by future candidates.

So will the digital advantage of the Democratic Party and its friends make a big difference in the 2014 elections?

Probably only in tight races, analysts said. These could include those featuring vulnerable Senate Democrats such as Mark Begich of Alaska, Mark Pryor of Arkansas, Mary Landrieu of Louisiana and Kay Hagan of North Carolina. The four Democratic senators are crucial to Democrats' efforts to keep control of the Senate, where Republicans need to gain six seats to take over the chamber.

The embattled Democratic incumbents will benefit from their party's continued investment in data operations, analysts in both parties said. The Democratic Senatorial Campaign Committee has launched an effort to increase turnout in the senators' states, and plans to use voter data to mobilize people who otherwise might not vote in a midterm election.

Republicans are hoping their efforts to oust the senators will receive a big push from dissatisfaction with Obamacare and the first fruits of the RNC's revamped digital program that the party hopes will be in high gear by the 2016 presidential election.

Money is not an issue, and Republicans are trying to close the expertise gap by both hiring more experts and increasing training.

"There was a wakeup call after 2012" throughout the Republican Party, said Tim Miller, executive director of America Rising, an opposition research group for Republicans.

Even so, some Republican digital strategists say the party's investment in a digital team at the RNC headquarters in Washington has not yet translated into much help for campaigns.

"I have a dozen clients with primary elections in two months, and early voting starts in two weeks. If I were waiting for people sitting inside the (Capital) Beltway for marching orders, I wouldn't have done anything yet," Harris said. "We have had to do this ourselves without a lot of help from the establishment."