Revolution in Ukraine ... OK. Now what? 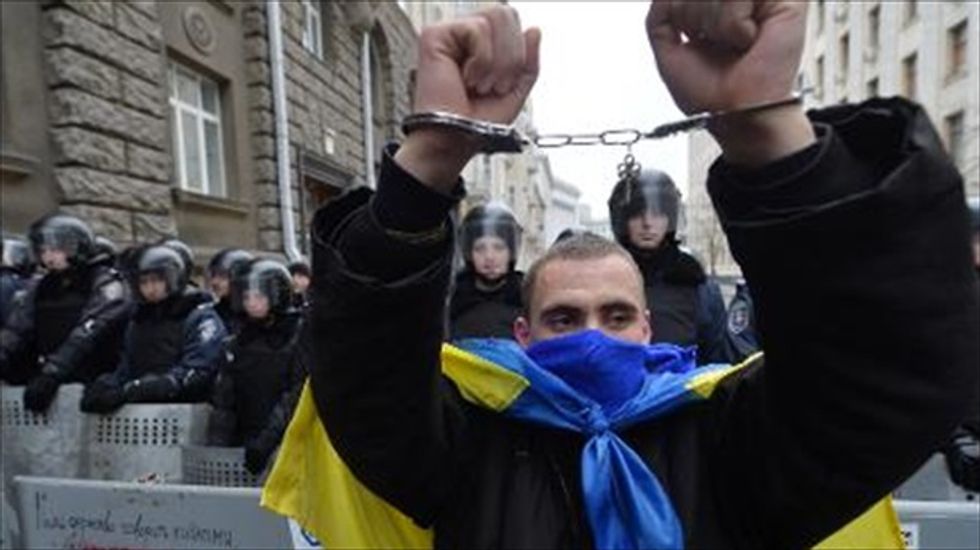 A pro-European activist wearing the Ukrainian flag as a cape raises his symbolically-handcuffed hands during an opposition rally in Kiev on Jan. 17, 2014 [AFP]

February 22, 2014, will go down in Ukrainian history as the day events occurred too rapidly to digest, a fateful 24-hours best encapsulated by the crowds touring President Viktor Yanukovich’s mansion, newly dubbed “Ukraine’s Disneyland”.

But if Yanukovich’s opulent compound north of Kiev seemed like a theme park, the political shake-up that enabled the presidential break-in was the giant roller-coaster.

The problem though, was few could tell if the safety features were on or if Ukraine was hurtling toward chaos or even civil war.

A day after parliament declared Yanukovich constitutionally unable to carry out his duties, the most pressing questions for Ukrainians and the international community were: what next and who is in charge?

The answers, according to FRANCE 24’s international affairs editor Douglas Herbert, were not at all clear. “What we can say for sure is Viktor Yanukovich is not in charge in Kiev. Not only that, this is a city in which his life would be at risk if he were to return at this point,” said Herbert, reporting from the capital’s Independence Square.

The embattled Ukrainian president abandoned the capital on Saturday, heading to his native east, from where he has denounced what he called a "coup d'etat" and challenged the legitimacy of the national parliament.

“Yanukovich has been saying he’s going to travel around his bastions of support in the east meeting with people,” said Herbert. “It’s unclear who he’s going to be meeting with. What we’re hearing when we talk to people is he’s not going to be on squares, in the middle of the streets, trying to rally people.”

The old split between ‘pro-Russia’ and ‘pro-EU’ Ukraine

There have been signs that Yanukovich could be losing support his heartland – especially as evidence of his opulent lifestyle starts to emerge.

On Saturday, around 3,000 protesters gathered in the northeastern city of Kharkiv, proclaiming support for the political changes underway in Kiev.

The demonstrations came as regional and local leaders loyal to Yanukovich were meeting in Kharkiv to challenge the legitimacy of the Ukranian parliament's actions.

The governors meeting in the mainly Russian-speaking eastern regions had raised the possibility that the country would be split along the fault line between rival ethnic groups, with the eastern-based "Russians" versus the western-based "Ukrainians".

But the regional governors denied that was their intention. "We're not preparing to break up the country. We want to preserve it," said Kharkiv Governor Mikhaylo Dobkin.

Many Ukrainians reject the division of their country into a pro-Russian east and a pro-European Union west as overly simplistic.

“I wouldn't say the west [of Ukraine] looks to Brussels and the east looks to Moscow because the west and Kiev are also skeptical of Brussels, especially Brussels’ bureaucracy,” said Volodymyr Yermolenko, a Kiev-based activist and blogger, in an interview with FRANCE 24. “We support the ideals of Europe and European values, but not the bureaucracy of Brussels.”

The Kharkiv governor’s assertion that regional leaders – sometimes called “the regionnaires” – are not keen to disrupt Ukraine’s unity underscores an argument by some experts that many eastern politicians merely use the threat of secession as a bargaining chip in their dealings with Kiev.

In a blog posted earlier this month, Alexander Motyl, a professor at the New Jersey-based Rutgers University and an expert on Ukrainian affairs, noted that, “The Regionnaires need to be in Ukraine; more than that, they need the threat of secession to compel spooked democrats to make concessions. But the threat is hollow.”

“A split between the Russophone east and western Ukraine is not conceivable,” dismissed Volodymyr Poselskyy, president of the Paris-based Association l’Ukraine dans l’Europe. “It’s an idea that Yanukovich presented to the people – as a form of blackmail. But it’s not realistic and the people are not fooled by this.”

Fears of a civil war

The tendency to view this vast former Soviet republic of 46 million as dangerously split has sparked fears that Ukraine could slide into civil war. At the start of what was to become an eventful week, for instance, Polish Prime Minister Donald Tusk warned that, “We may be witnessing the first hour of a civil war” in Ukraine.

Events in Ukraine have been unfolding at such a rapid clip that few experts are willing or able to predict what lies in store for the former Soviet republic that won independence in 1991 without putting up too much of a fight.

"We cannot completely rule out a return to violence, but this disaster scenario is unlikely,” said Jean-Christophe Romer, an East Europe expert at Sciences Po Strasbourg.

“No one wants to see a civil war in Ukraine,” Romer added, referring to Russia and the European Union, the two competing international stakeholders in Ukraine. “We must watch the evolution of the discourse, if there is a ratcheting up of the rhetoric in the run-up to the May elections.”

On Saturday, parliament voted to hold early elections on May 25. The list of official candidates has not yet been fixed, but the Kiev rumour mill is already spinning out possible applicants for Ukraine’s top post.

While former prime minister Tymoshenko is probably the best internationally known figure, Herbert notes that she remains a controversial figure among Ukrainians. “She’s hardly seen as a saint,” said Herbert. “The past three months or so have given Ukrainians a sense that they don’t trust political leaders whether it’s the likes of Yanukovich or Tymoshenko. She is likely to come under very skeptical scrutiny in the days and weeks to come.”

A day after her release, Tymoshenko announced that she would not be seeking the prime minister’s post. But she made no comment on a likely presidential bid.

The lack of faith in the old politicians has placed Klitchko – the politically inexperienced 42-year-old former boxer – in a favorable position, Romer believes. But like most experts, he insists that it’s too early to read the electoral tea leaves.

Implicit in the second guessing of possible candidates for the May 25 poll is the assumption that Yanukovich’s days as the leader of Ukraine are over. On Sunday, the president’s Party of Regions appeared to give up on a wavering leader with whom even Russian President Vladimir Putin has been losing patience.

"The changes that have happened, have happened. It's already done," said Tatyana Bakhteyeva, a parliamentarian from Yanukovich's home region of Donetsk, told Reuters. Party lawmakers issued a statement blaming Yanukovich and his entourage for the crisis.

Most experts hope Ukraine will return to stability and democracy as it did after the 2004-2005 Orange Revolution.

The key player in Ukraine’s future stability and return to democracy of course will be Russia, its powerful eastern neighbor which docks its Black Sea Fleet in the port city of Sevastopol on Ukraine's Crimea peninsula.

For the moment, Russia appears to have lost its advantage. But Moscow has a long history of involvement in the region and is unlikely to relinquish its strategic interests in Ukraine.

The question now is how will Putin play his cards regarding Ukraine’s future. "Certainly Vladimir Putin’s behavior has become increasingly opaque,” said Romer. “But Russia does not want a confrontation with Ukraine. Putin is likely to be waiting for the election to see who comes up and he will try to build good diplomatic relations – probably a secret diplomacy – with whoever takes the reins in Ukraine.”

There is uncertainty over whether Moscow will keep paying out a $15-billion bailout it promised to Kiev, with the latest tranche of Russian aid suspended pending a return to calm. But in an interview with French radio station France Info, author and Russia expert Laurent Chamontin noted that while Moscow has held up its aid payment to Ukraine, “we cannot interpret it as a gesture of going to war.”