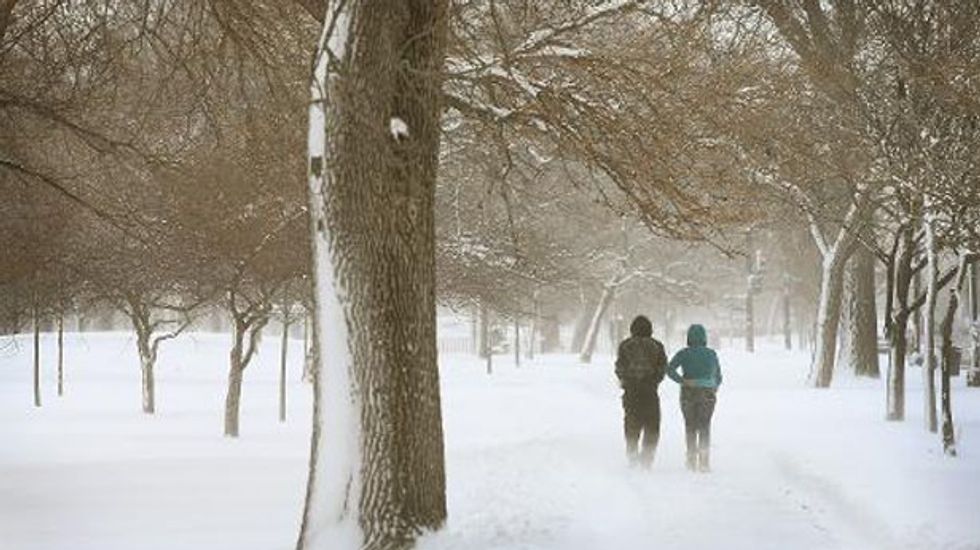 The United States is home to some of the world's largest natural gas deposits and supplies have flooded the market over the last five years, erasing concerns about dwindling output.

But the coldest winter in decades has drained stockpiles quicker than ever, forced rationing, and pushed prices to all-time highs, revealing the difficulties of storing and transporting fuel across the continent.

Unlike for crude oil, there is no government run strategic reserve that can be tapped in times of emergency.

In many ways it is no surprise that supply for natural gas is strained. January saw two blasts of arctic cold, boosting heating demand for homes and businesses in most of the country to record highs. Other heating fuels like propane and fuel oil have suffered supply shortages.

The severe cold has also revealed potential structural shortfalls that could push prices higher not just this summer as depleted inventories are restocked, but in coming years if investments are not made to increase storage and pipeline capacity.

With nearly two months of winter left, more gas has been pulled from the 400 U.S. storage sites this winter than the whole of last winter, towards a level that many analysts consider dangerously low.

Gas stockpiles at the beginning of the withdrawal season in early November topped out at 3.8 trillion cubic feet (tcf) but have since fallen to just 1.9 tcf, nearly 20 percent lower than the same time last year, and are expected to finish winter around 1.2 tcf, according to a Reuters poll. Many analysts see 1 tcf as the base level before a loss of pressure makes it harder to draw more gas from storage.

Some power providers have asked customers to use alternative fuels like heating oil. Prices have risen higher as utilities scramble to buy gas in the spot market to preserve falling stockpiles, a rare move so early in the season.

"Even with the country's sizable working gas storage capacity, the system is not designed to meet the kind of exceptional peak demand we have seen this winter, particularly in certain regions," said Ira Joseph, executive director of international gas at Pira Energy Group in New York.

Storage space has risen about 15 percent since 2007 to 4.2 tcf, more than the 10 percent increase in demand over the same period. But the location of storage sites poses problems for supply and may continue to do so as demand increases in coming years.

Most storage facilities are in depleted fields in Appalachia, the Gulf Coast, the Plains, the Rocky Mountains and the West Coast, many of them far from demand centers.

The heavily-populated northeast, already poorly supplied by pipelines, has barely any storage caverns. Prices there shot up to above $120 per million British thermal units in January, 20 times higher than better-supplied areas in the south.

In Washington State, the Jackson Prairie gas store, the only site in the state and an important supply hub for the Pacific Northwest, began rationing supplies last week.

Storage is expected to grow further: there are about six storage facilities under construction in the United States expected between 2014 and 2016 that will add about 64 billion cubic feet, or 1.5 percent, to capacity, according to federal data. There is also about 32 bcf of potential expansions in 2014 and 2015.

Still, it remains to be seen if this is sufficient. U.S. demand for gas could rise by 15 percent by 2018, as pipeline exports to Mexico ramp up, shipments to Europe and Asia begin and more gas is used in transport and industry, according to Reuters calculations.

"All this is happening this winter before a massive demand boom a few years down the line," said Joseph at Pira. "That should add to volatility."

As power generators seek to restock inventories this summer, prices will need to move even higher to encourage producers to drill for more gas, analysts said.

The natural gas rig count is at its lowest level since 1995, as producers turn their rigs to drill for more lucrative oil, though it is unclear if this winter's high prices will be enough to entice them back to gas fields.

Already, natural gas futures hit a four-year high above $5.70 per million British thermal units (mmBtu) at the end of January. Regional prices for next-day delivery have hit records across the United States.

The premium of gas over Eastern coal reached $3 per mmBtu last week, the highest level since February 2010.

"A lot depends on the response from power," said Peter Nance, principal at ICF International in Austin, Texas. "If storage ends below 1 tcf, the question becomes whether high gas prices depress demand for the fuel in the summer as utilities switch to more economical coal," he said.