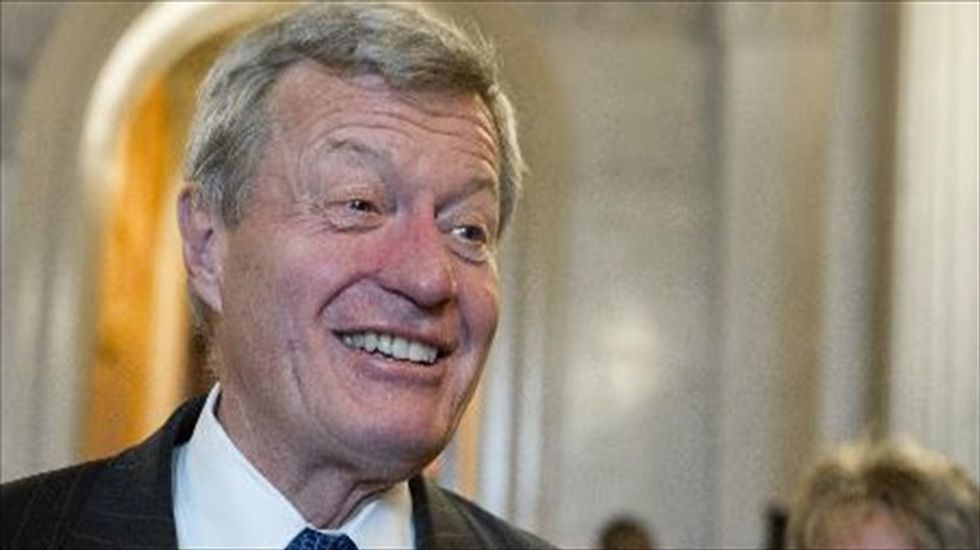 Senator Max Baucus (D-MT) after being confirmed by the Senate as the next US Ambassador to China in Washington, DC, Feb. 6, 2014 [AFP]

Incoming US ambassador Max Baucus pledged Thursday to build trust with China as fellow senators confirmed him to the post at a time of high tensions in Asia.

The Senate approved Baucus in a rare unanimous show of support for one of President Barack Obama's high-profile nominees, although four senators including Baucus himself did not vote.

"The United States-China relationship, I believe, is one of the most important bilateral relationships in the world. It will shape global affairs for generations -- we must get it right," Baucus, a member of Obama's Democratic Party who has represented Montana since 1978, said on the Senate floor after the vote.

On a lighter note, the 72-year-old running buff said he wanted to run the Beijing Marathon, although he admitted -- without mentioning the Chinese capital's notorious air pollution -- that he may not be able to do so.

"I've actually got my eye on the Beijing Marathon. But to be more honest, maybe scale down to half-marathon -- something a little shorter," he said to laughter from his colleagues.

Speaking later to reporters, Baucus said that he expected to be busy handling the heated maritime disputes between Beijing and its neighbors in the East China Sea and South China Sea.

A top priority is to "sincerely work with China to try to help develop confidence and trust," he said.

Baucus said it was not decided when he would leave for Beijing but indicated that incumbent Gary Locke, a former governor of Washington state who was the first Chinese American in the position, would stay at least until the end of the month.

Senator John McCain, a senior member of the rival Republican Party, called on Baucus to mount a strong defense of freedom of navigation amid concerns in Japan, the Philippines and elsewhere over Beijing's claims.

"I think South China Sea is probably the most immediate and pressing issue but trade is obviously (important), and cyber-security is huge," McCain told AFP.

Baucus, whose home state has a major ranching industry, has been a strong advocate for free trade as a senator.

He is perhaps best known as a driving force behind Obama's controversial health care overhaul, which Baucus hailed in his farewell speech for "helping millions of Americans" to find coverage.