'Sleeves up': Rule banning Marines from baring arms is repealed 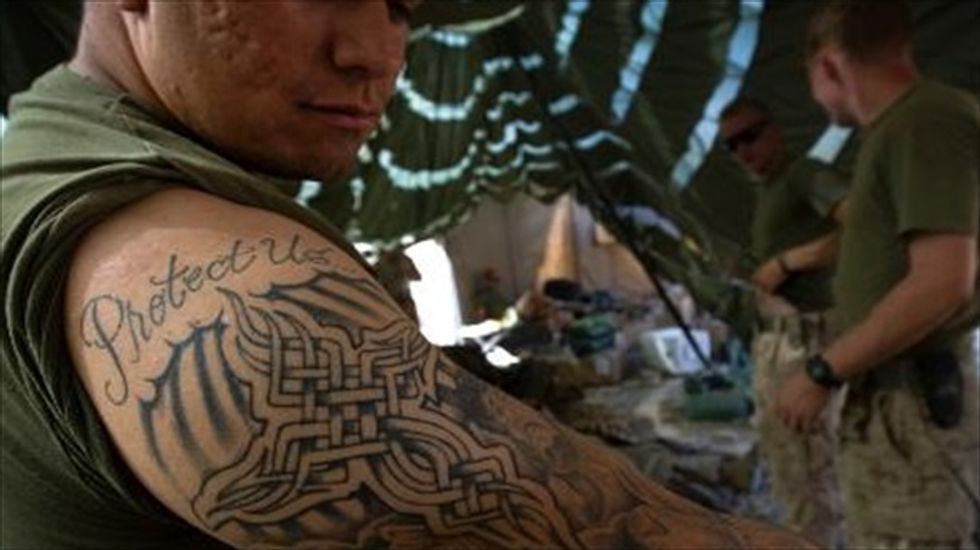 A US Marine shows off his arm in Farah Province, southern Afghanistan, on Sept. 27, 2009 [AFP]

Rank-and-file U.S. Marines will be able to show off their forearms once more after the commandant backed down from a deeply unpopular rule that banned troops from rolling up the sleeves of their combat fatigues.

The two-year-old regulation has been the subject of endless complaining from Marines, who for years bared their arms in their camouflage uniform, mainly as a way of distinguishing themselves as a "breed apart" from other branches of the military.

"I can't tell you how many times we have been asked the persistent question, 'Commandant, are we ever going to return to SLEEVES UP?' General James Amos, the commandant, and the corps Sergeant Major Michael Barrett, said in a statement on Facebook.

"I've thought a lot about this over the past 2.5 years; I realize that it's important to you. Sleeves up clearly and visually sets us apart."

He added: "WE HEAR YOU MARINES!"

Citing the "persistence" of the troops, Amos said he was issuing orders to return to "sleeves-up status" when Marines wear desert camouflage uniforms outside of combat zones.

The order was due to take effect on March 9, when the tradition-bound corps switches to a desert camouflage for the season.

Marines immediately welcomed the news, which received more than 25,000 "likes" on Facebook.

Amos came to the decision after speaking to "thousands" of non-commissioned officers in recent months.

"They've spoken resoundingly on this issue, and he has heard them," Captain Eric Flanagan told AFP.

The other branches of the U.S. military are not permitted to roll up their sleeves.

Marines who deploy to combat have to wear their sleeves down to help protect from the sun and insects.