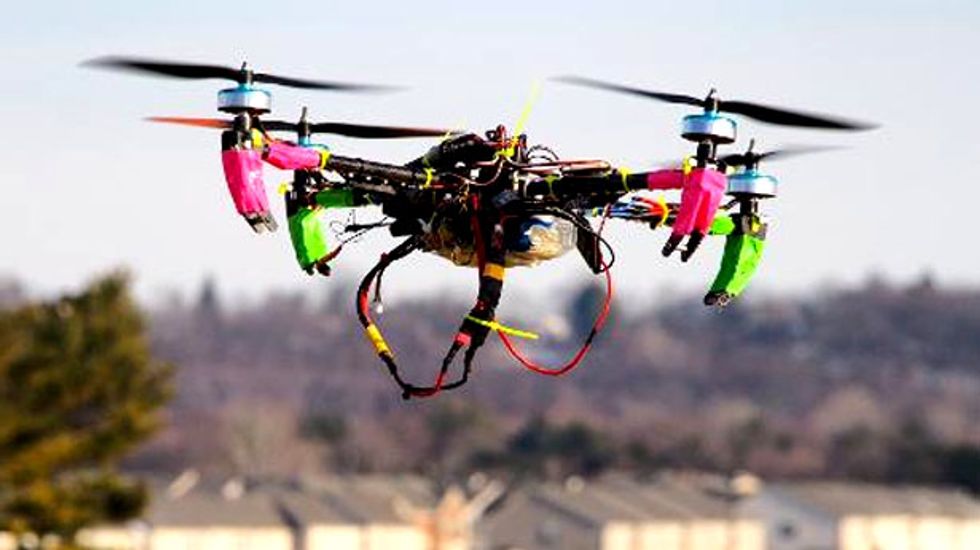 Hovering like mechanical sparrows over a windswept Maryland field on a bright Saturday afternoon, small drones seem harmless -- but they are at the center of an ardent dogfight over US regulations.

Every few weeks, members of the 800-strong DC Area Drone Users Group gather to fly their remote-controlled unmanned aerial vehicles and discuss the ways they could be put to good civilian use.

"The applications are endless," said German expat Peter Schloemer, 57, after flying a Multirotor, a black octocopter that resembles an insect, around the hilltop with compatriot Uwe Doergeloh, 41.

"We're not just about technology itself, but how technology can be used to make the world a better place," said Tim Reuter, the founder of the Washington area group.

But no sooner does a drone get off the ground than it flies into red tape.

Guidelines set by the US Federal Aviation Administration (FAA) limit drone flying to 400 feet (120 meters) above the ground -- about 150 feet less than the height of the Washington Monument -- and clear of airports.

The FAA also strictly forbids the use of drones for what it deems to be commercial purposes, although it grants exemptions for government and law enforcement use.

Last year, the FAA fined Swiss drone pioneer Raphael Pirker, alias Trappy, $10,000 for flying "in a careless or reckless manner" when he used a Ritewing Zephyr drone to record a bird's eye view of the University of Virginia.

Pirker is challenging the "notice of proposed assessment," his lawyer Brendan Schulman said, in what small-drone enthusiasts see as a test case of how far the US government is ready to go to regulate their activities.

More recently, the FAA slapped the wrists of a Minnesota craft brewer for making a YouTube video, seen nearly 450,000 times, of a skeletal hexacopter airlifting a case of lager to an ice-fishing hut in the middle of a frozen lake.

"They said it was not recreational, and that even though we were not taking money from the people we were delivering beer to, it was still commercial because we were profiting from the use of the video," Jack Supple, chief creative officer of Lakemaid Beer, told Fox News.

Online retailing giant Amazon whipped up publicity in the run-up to Christmas with a similar video promoting a "Prime Air" 30-minute mini-drone delivery service that it said was in development.

The Teal Group puts the potential worldwide market for drones of all sizes at $89 billion over the next 10 years, with armed forces representing the biggest single market segment, Phil Finnegan, director of corporate analysis at the Washington area aerospace consulting firm, told AFP.

But this past week, the FAA said it would not meet an end-of-2015 deadline for fresh regulations enabling civilian drones to safely share the skies with private and commercial aircraft -- and when regulations do come, it will be in stages.

"We won't get to a point where there will be one day where suddenly everyone can operate anything, anytime," FAA chief Michael Huerta said.

"But as we go through the certification and qualification process, there will be classes of these aircraft that we will be able to introduce."

This has frustrated members of the DC Area Drone Users Group, who say that small drones are already being put to practical use in places like Germany, for photojournalism, and Japan, for agricultural surveys.

"We're letting other countries get ahead of us," said Reuter, who in just a month raised $545,000 via Kickstarter to put into production, by mid-2014, a three-rotor "microcopter" called the AirDroids Pocket Drone that can carry a GoPro camera, yet fold down to the size of an iPad.

Christopher Vo, a 29-year-old doctorate student in computer science and robotics at George Mason University in Virginia, said he uses the three quadracopters he brought to the recent Maryland meet-up for research purposes.

But he added: "If they start (permanently) banning commercial use, it might raise a lot of questions when I take them out into the field for research."

The Drone User Group Network, with 3,000 members worldwide, is now welcoming entries for a $10,000 Drone Social Impact Award for "the most socially beneficial, documented use of a low-cost drone."

And more than 120 teams from 27 countries have already entered a contest to come up with a drone to combat the poaching of endangered rhinos in South Africa's Kruger National Park.

Such concepts could help reshape the public image of drones, which many associate with $4 million Predators striking terror targets overseas or Big Brother surveillance of Americans' private lives by law enforcement.

Telecoms engineer Hocine Chebili, 54, says he can see public acceptance grow every time he takes his remote-control hexacopter out for a whirl.

"Most people are very receptive," he said. "When they see it, they don't have the negative impression that they have with military drones. It's like a toy."