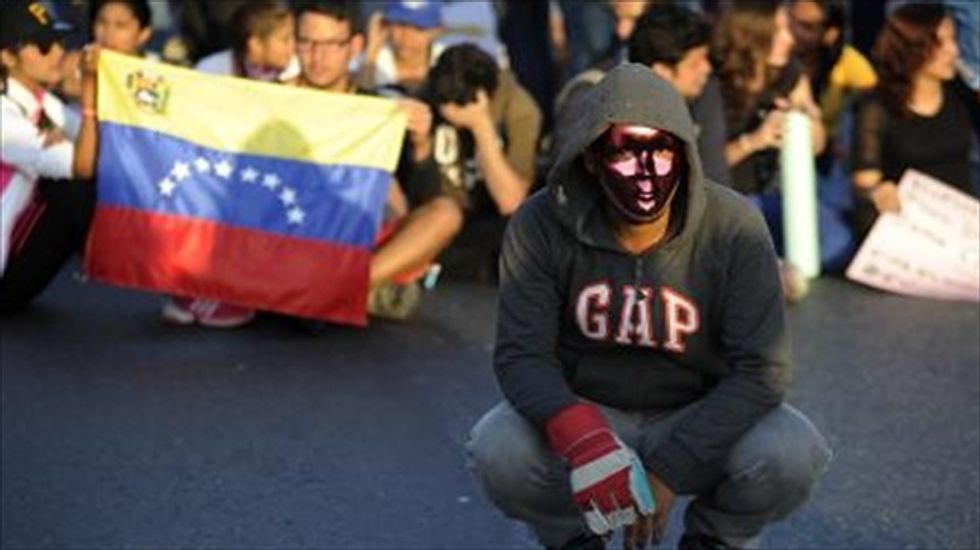 Students demonstrate against the government of Venezuelan President Nicolas Maduro, along a main highway in Caracas on Feb. 13, 2014 [AFP]

About 2,000 students took the streets of the Venezuelan capital to protest the leftist government Thursday, a day after three people were shot dead and dozens injured.

Walking a few hundred meters (yards) to the west, where a young opposition protester died Wednesday, they complained of government violence and "oppression."

"Who are we? Students. What do we want? Freedom," they shouted, attracting no notable police response in Altamira Plaza, a traditional meeting place for anti-government protesters in Caracas's Chacao municipality.

A day earlier, thousands protested against rampant crime, inflation and shortages of basic goods in the biggest challenge to President Nicolas Maduro since he took over from the late Hugo Chavez last year.

The ensuing unrest prompted Maduro to warn of a coup attempt, and vow he would not be overthrown.

His government had urged people to demonstrate in "anti-fascism" rallies, but only a handful of supporters turned up.

Top opposition figure Henrique Capriles insisted a coup was out of the question.

"Expressing yourself is not a coup d'etat," said Capriles, who ran against Maduro in last year's elections. "A civilian doesn't commit a coup.

"We will channel discontent, but I will not lie to you, the conditions are not right for the departure of the government," he told reporters in condemning the clashes between anti- and pro-government protesters.

"What Venezuela urgently needs is for these killings to be investigated and the killers brought to justice, no matter their political affiliation," said the group's Americas director Jose Miguel Vivanco.

The government has ordered the arrest of senior opposition figure Leopoldo Lopez, a former mayor of one of Caracas's five municipalities, according to El Universal newspaper.

The paper published a photo showing the arrest warrant for Lopez, 42, who is accused of homicide and conspiracy.

The victims of Wednesday's violence were a pro-government demonstrator and two student opposition protesters.

At least 80 people were detained, including a photographer and reporter covering the protest, the journalists union said.

And Colombian news channel NTN24, which had been featuring the protests in depth, was abruptly pulled off air.

Venezuela -- with an institutionally socialist government dependent on oil revenues in a state-led system -- sits atop the world's largest proven reserves of crude.

Yet its economy has been battered by inflation of more than 50 percent a year.

Venezuela has had economic problems go from bad to worse amid shortages of hard currency, while dwindling supplies of consumer goods have frustrated even some government supporters.

The government blames "bourgeois" local business interests for trying to profit from its largely low- and middle-income political base. It has engaged in privatizations and unpopular currency controls.