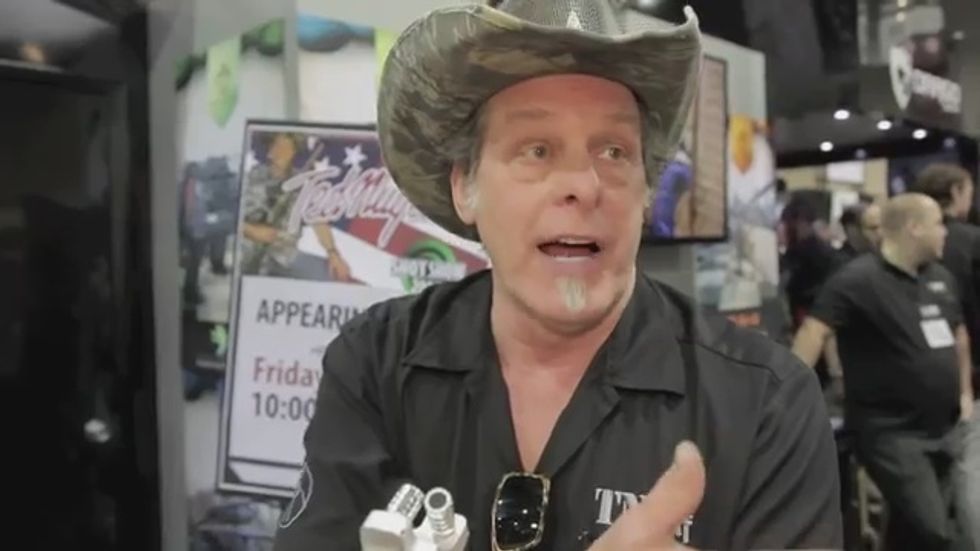 A week after cancelling an appearance of the Erin Burnett show, musician Ted Nugent gave an extended interview with the CNN host where he compared President Barack Obama to rapists, murderers, and child molesters and took credit for getting Piers Morgan's "ass thrown" off of the network.

Last week, under siege for his comments referring to the President as a "subhuman mongrel", Nugent backed off with an apology stating, "I do apologize–not necessarily to the President–but on behalf of much better men than myself."

Asked by Burnett if he meant it, Nugent replied, " I bet you understand that the question is, do you apologize and I answer yes. You don't really have to ask that question again, do you?"

After Nugent stated that 'mongrel' "was a street word", Burnett followed up, pointing out that the only place she found the term 'mongrel' used in that context was on the Aryan Nation's membership form.

"The only use of the word 'mongrel' that I could find in common talk, because you're talking about street talk, was actually the Aryan Nation membership form where you have to affirm, quote, 'I'm an employed white and Christian. I concur the Aryan Nations is only Aryans of Anglo-Saxon, Germanic, Nordic, Basque, Lombard Celtic and Slavic origin,' Burnett read. 'I agree with Aryan Nation's biblical exclusion of Jews, Negroes, Mexicans or Orientals and mongrels.'"

"That's the only place I could find that word. Did you mean that way?"

Nugent explained that he had served as a police officer in Lake County, Michigan and that he had been involved "with the DEA and ATF and U.S. Marshals and the FBI and Texas Rangers and heroes of law enforcements."

"And we are re-arresting fugitive felons let out of their cages after murdering and raping and molesting children, carjacking. And we keep going after these guys," he stated. "The adrenaline is something like you will never experience, I hope you never have to experience it, but when we are done with these kinds of raids, we get together and our hearts are broken that we have to face these monsters. We call them mongrels. We call bad people who are destroying our neighborhoods mongrels."

Stung by criticism from CNN hosts Wolf Blitzer and Don Lemon that his comments appeared to be racist, Nugent told Burnett he is not a racist and accused her network of propaganda.

"But for anyone to claim that I'm a racist or it had racist overtones is the typical crap that the propaganda ministry and the media, particularly most of your cohorts there, even though I got Piers Morgan's ass thrown out and I'll do the same with Don Lemon and Wolf Blitzer when I can."