The agony and ecstasy of Hong Kong's extreme runners 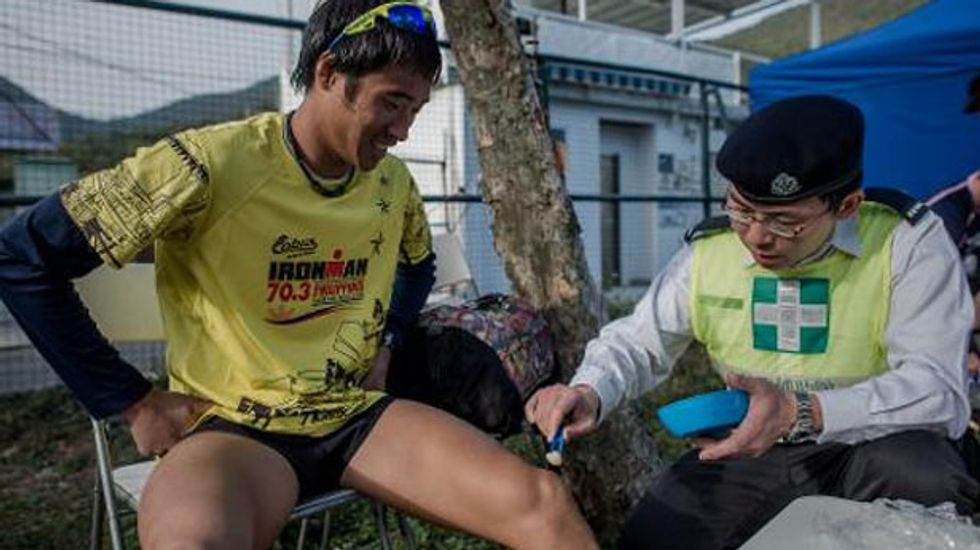 Hong Kong is known for its long working hours and rat-race lifestyle, but on the rugged trails of the surrounding hills extreme runners are driven by a different ambition -- the ultimate 'ultra' experience.

Defined as any distance beyond the 42.2-kilometre (26.2 mile) marathon, ultra races are becoming increasingly popular around the world -- and with its 300-kilometre network of trails criss-crossing rocky terrain, exposed peaks, bays and reservoirs all close to the city, Hong Kong is increasingly being seen as the ideal venue.

With three new 100-kilometre races launched in the territory in the past three years and also a 100-mile race, trail runners are pushing themselves to go further than ever.

"People are seeking something else to set them apart," said Jeanette Wang, health editor of the South China Morning Post and a competitive trail runner.

"When you say you've done a marathon, you're not the life of the party any more. In Hong Kong in the last two years, things have got so crazy that even 100 kilometres isn't unique."

Two decades ago ultras were run by an intrepid few, with the United States and Europe the main centres. But the lure of spectacular routes and a special camaraderie -- for many the challenge is simply to cross the line -- has seen popularity go global.

According to the International Association of Ultrarunners there are now more than 1,000 races around the world.

The Vibram Hong Kong 100 became the first stop on the inaugural Ultra-Trail World Tour in January this year, linking "emblematic" races on every continent -- with Hong Kong and Japan's Mount Fuji the two Asian events.

"The opportunity to run these trails so close to a huge population of people is very different from many trail runs in the world," said prominent New Zealand ultra runner Vajin Armstrong of the Hong Kong course.

"Asia is such a growth region for trail running at the moment...it's really important that athletes come here and get a sense of what it has to offer."

Hong Kong's longest-standing ultra dates back almost 30 years to the days of British rule, when an annual 100km training exercise led by Gurkha soldiers opened up to the public.

The city's ultra races attract everyone from committed athletes, to competitive "weekend warriors" and novices who just want to finish.

While elite runners might cover 100 kilometres in 10 hours, those further down the pack will be toiling for much longer, often through the night.

"Your face is like sandpaper from the salt. Any two body parts in close proximity will chafe. There's tiredness, inflammation, hunger, muscle pain."

She runs up to 20 hours a week in peak training and admits it is hard to socialise and hold down a job too - she took a year to prepare for her first solo 100km race.

"Experiencing pain and discomfort and knowing you are strong enough to overcome it and persevere is incredibly empowering," she said.

"If you can tackle all that and come out with a smile on your face, you can do anything in life."

Though ultras are physically and mentally tough, many runners find them the perfect antidote to modern life in a highly-strung city.

"I don't like road races -- I like getting out into the mountains because it's beautiful," banker Wilson Leung, 45, said after finishing the popular 50-kilometre Green Power Hike.

"In the hills I can forget my problems."

He spent seven years working up to ultra distances after taking up running in his late 30s and says it suits his age group.

"People lose their speed but not necessarily their endurance, so they start running longer as they get older. Experience is important, knowing how to protect your body and building up slowly."

But there are fears of a blot on the landscape for future trail races in Hong Kong as pollution worsens in the territory.

Murky smog frequently blankets the skyline and a new government index has recorded high or very high levels of pollution almost every day since it was implemented late last year.

"The air quality is better in remote places, but Hong Kong is too small to get away from it completely," says Keith Noyes, race director of The North Face 100 Hong Kong and organiser of the long-standing King of the Hills mountain marathon series.

"It's only going to take one incredibly polluted event with a big international crowd to get a bad reputation."

For now though, while runners might stay indoors on the smoggiest days, the lure of the hills remains.

"The demand for the more challenging trail races in Hong Kong is phenomenal," says Noyes.

"Runners are beginning to realise it's much more fun to be on the trails than the roads," says race director Steve Brammar, who founded the event with his wife Janet Ng.

"They are also realising that a marathon distance isn't the limit of human endurance -- it's almost just the start."